Home/Church Talk/Why Creeds are not Useful in Worship 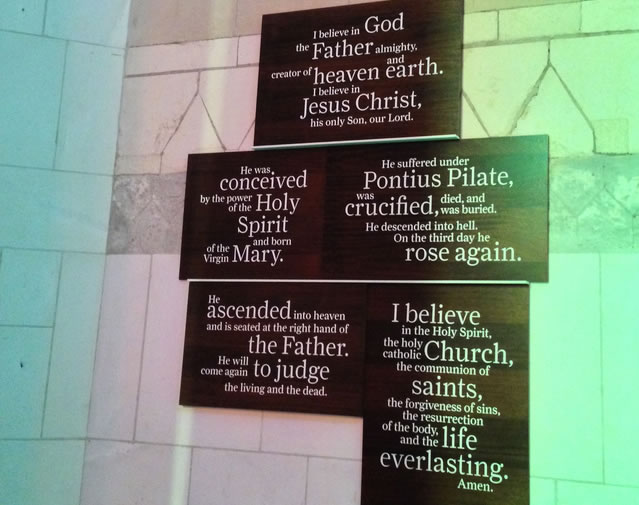 Almost a year ago, we discussed the post “John Wesley thought the Creeds were Weaksauce.” In it, I contended that John Wesley did not see the Creeds as essential to the regular gatherings of the people called Methodists. Now a year later, I have some more to contribute to the discussion.

Dr. Raymond E. Balcomb was pastor of First United Methodist Church in Portland, OR, from the 1960s to early 80s (full bio here). The following is an edited form of a longer sermon he gave in 1966 in response to questions about why that church didn’t recite the Creed every Sunday. It is reprinted with permission of his family.

Why Don’t We Say the Creed?

A creed gives a firm outline to one’s thinking and keeps it from becoming just a formless blob of believing in everything a little bit. The Apostles‘ Creed, although seldom if ever used in the Eastern Orthodox churches, and although its exact wording has never been established by a Council, probably comes closer to being universally acceptable among Christians than any other post-biblical formulation.

As such it tends to unite us and to provide a means whereby we can identify one another and, even in a strange land or an unfamiliar place, feel at home in the community of believers. Its regular use gives a “clear opportunity for the people with one voice to declare their Christian position.” It has never been the center of any particular controversy, as some of the others have, so there is considerable room for varying interpretations.

Still, there is no Creed in our service this morning; there was none last Sunday and it is not likely that there will be one next Sunday. Why?

The Creed is not an adequate summary

First of all, it should be noted that the Apostles‘ Creed was not developed for use in public worship. Such usage comes’ from the Middle Ages and carries no particular weight as “traditional.” So far as the oldest tradition in the Church is concerned one might better ask “Why do you use a creed in your service?” rather that “Why don’t you?”

The Creed was never intended to be, and is not, a complete or adequate summary Christian doctrine. The Creed is no more an adequate statement of faith for an adult Christian than a primer is adequate reading material for a college graduate. It says nothing whatever about the Bible, the nature of man, atonement, justification, salvation, grace, prayer, or the life of ethical and other-centered love and service. It is at best a poor guardian of orthodoxy and could have been affirmed in good faith by many of the most famous heretics and schismatics of church history from Arius and Pelagius in the fourth century down to Servetus in the sixteenth and Joseph Smith (founder of the Mormons) in the nineteenth centuries. The tradition that it was written by the original twelve apostles is a pious legend unmentioned before the fifth century.

The Creed is just a part of that vast non-canonical literature of thought and devotion which has developed within Christianity across the years which may or may not prove useful from time to time in public worship.

The Creed no longer says what it means

In the second place will you note that it no longer says what it means. It has meaning, valid meaning, great meaning; but the meaning does not come through clearly to contemporary minds. It has overtones and undertones that most of us completely miss.

How to tell fact, faith, and symbol one from another is not always easy. It is possible, for example, to make a case for “born of the Virgin Mary” under any of the three.

The net result all too often is that the use of this Creed raises far more questions than it answers. One of the things that bothers a great many intelligent and sincere people, I would say, is that in church we seem so often to say things that we don‘t really mean, or to say them mechanically by rote without thinking of or knowing their real meaning; with the result that we are open to the criticism of being naive, formal, or insincere;

So far as I am concerned, the ancient Creed is a good deal like modern poetry or painting. Its meaning is not readily clear; rather than helping me understand, it hinders and confuses. It has meaning, and can be understood, but the effort for most persons is greater than they are likely to make. It is too far from the language of ordinary contemporaries to say to them what it means.

There are better alternatives to the Creed

The third and main reason is that there is something better to use. There is something which combines all the advantages of a creed with few, if any, of its disadvantages—something which provides a definite structure of religious belief, and gives the congregation an opportunity “with one voice to declare their Christian position,” and adds to it a guide for action.

I am referring to what we recite under the title “Our Lord’s Summary of the Law.” It is better than the creed because it is older, more intimately associated with Jesus, and far more comprehensive and demanding. [Editor’s Note: The above scan is from a 1972 Bulletin where the section is titled differently than this 1966 sermon]

Jesus‘ teaching and example give the Christian the answers which insure a proper understanding and interpretation of the older  commandments. The Summary is better because it is older and is directly related to our Lord. But most of all the Summary is better than any creed because it deals with doing and being rather than mere believing. As such it is infinitely more comprehensive and also vastly more difficult.

Rightness of belief has never been enough to insure righteousness in behavior. As the little Book of James (2:19) puts it, “even the demons believe.”

I would not be misunderstood. Belief is important, and surely has its influence on behavior. But behavior is more important, all-important; it is those who do the will of God, according to Jesus, who are part of his Kingdom (Mt 7:21, etc).

And it is behavior, not belief, which is all-important.

Why don’t we use the Apostles‘ Creed? It was never intended for use in public worship, it no longer says what it means, and our Lord’s summary of the Law is better.