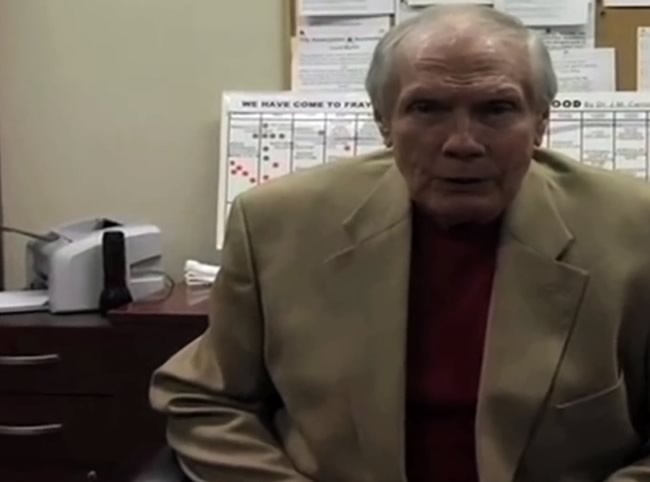 Note: You have to read to the end to “get” this post. Sorry to you skimmers!

In Genesis 19, God decides to destroy the cities of Sodom and Gomorrah. Long before two male angels are threatened with gang-rape by a mob of men, God decides to destroy the two cities. Long before “sodomite” became synonymous with homosexuality, God declared that Sodom was inhospitable to strangers and was full of selfish bigoted people. The prophet Ezekiel tells us precisely why Sodom was destroyed:

Let me tell you about the world’s greatest Sodomite.

It is in the news today that Fred Phelps, founder of the Westboro Baptist Church and the “God Hates F***” movement, is perhaps in his final days (update 3/20/14 – he passed away) and has been excommunicated by his own church, according to one of his sons:

The younger Phelps, one of several members of the family to have parted ways with the church, also said his father was excommunicated by his own church last August, but did not say for what reason.

“I’m not sure how I feel about this,” he said. “Terribly ironic that his devotion to his god ends this way. Destroyed by the monster he made.”

Let me tell you about this inhospitable Sodomite.

The entire first chapter of Romans could be written about Fred Phelps.

Therefore you have no excuse, whoever you are, when you judge others; for in passing judgment on another you condemn yourself, because you, the judge, are doing the very same things.

Oh, maybe I wasn’t being clear above. Sorry.

My prayer isn’t for Fred Phelps.

My prayer is for the greatest Sodomite, the one most inhospitable to others.

My prayer is likely for me.

Because all of what Paul says in Romans 2:1-5 is applicable to me when I consider Fred Phelps:

You say, “We know that God’s judgment on those who do such things is in accordance with truth.” Do you imagine, whoever you are, that when you judge those who do such things and yet do them yourself, you will escape the judgment of God? Or do you despise the riches of his kindness and forbearance and patience? Do you not realize that God’s kindness is meant to lead you to repentance? But by your hard and impenitent heart you are storing up wrath for yourself on the day of wrath, when God’s righteous judgment will be revealed.

As a Christian pastor, I am haunted by Romans 2.

And in saying all of that, I might be the world’s greatest Sodomite because I am so completely inhospitable towards Phelps that I am denying him his full humanity just as he denied so many of their humanity.

I know in my head that God loves Fred Phelps and grieves at his wasted life twisted by hate more than I do. But if I know in my heart that I feel relief at imagining a world without the Westboro Baptist Church..If I hold judgment in my heart, my God is as small as the god Phelps proclaims.

If I have a hard time imagining “picketing Phelps’ imminent funeral with love” or “offering the Phelps family privacy to grieve” then I cannot offer the hospitality in my heart that God requires of me.

Whoever it is, here’s my prayer:

Before we die, may we all know a bigger God whose love is larger than we think possible.

May we know a bigger God than we know today and have our lives reflect God’s great love.

And may we make the world a better place where all are welcomed, differences are celebrated, and hatefulness reigns no more.

Note to the reader: This post uses an identical argument style as Paul uses in Romans 1-2, which erroneously has been used to condemn homosexuality. In Romans 1, we get comfortable in our perceived position against the sinner as Paul lambasts the “other.” And yet Romans 2 forces the reader to look in a mirror and see how they are sinning themselves by judging (perhaps sinning the most!). Instead of breathing a sigh of relief at the possibility of Phelps’ church being gone, take this as an opportunity to think on our own missteps and perpetual shortcomings, and to seek peace in all things.