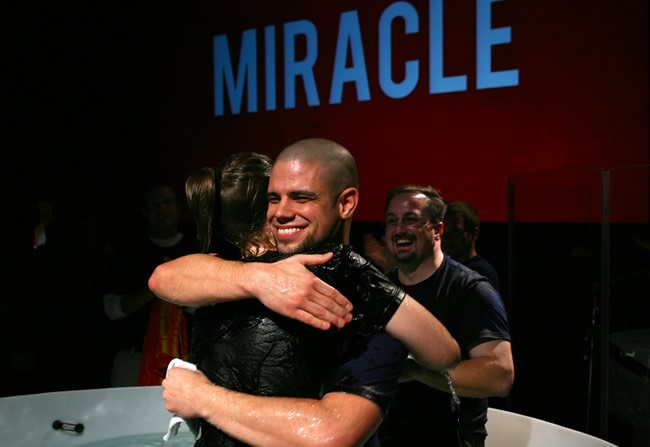 All over the news in the past week was a story about Steve Furtick, pastor of the Elevation megachurch, and his methods to “spontaneously” create massive Baptismal services. From a news report about his methods kit:

Page one shows that the first people instructed to respond to Pastor Steven’s call to baptism were not converts suddenly inspired but Elevation volunteers carefully planted in the crowd. The guide instructs, “Fifteen people will sit in the worship experience and be the first ones to move when Pastor gives the call. Move intentionally through the highest visibility areas and the longest walk.”

“They had people in the crowd stand up who never intended to be baptized,” said James Duncan, a communications professor at Anderson University and critic of Furtick. “They were shilling for Steven and the intent was these shills stand up and everybody else follows…Although Furtick says this is a miracle, it’s not a miracle,” Duncan said. “It’s emotional manipulation.”

No kidding it sounds manipulative. While GetReligion points out that Billy Graham did something similar in his crusades to encourage people to come down and accept Christ, the comparison doesn’t do Furtick any favors. As SlowChurch points out, this “Disneyfication of Baptism” puts more energy into the spectacle of this event than in perhaps the rest of the Christian life (the polar opposite of Slow Church’s tenets).

But it’s precisely all of the above that I’m jealous of.

To Furtick, he is so sure of what a baptism means (it’s a miracle!) that he’s willing to do everything possible to make it happen. He’s willing to make baptism into a formula, into a mechanistic process, and turn a Sacrament into a spectacle. The ends justify the means.

Here’s what I’m jealous of in a sentence: Furtick and his leadership and the entire arena know exactly what baptism means to them.

I cannot say that sentence about my own United Methodist Church.

Dan Dick used to be a researcher at one of our denominational agencies and one of his areas of study that was never published was a survey on United Methodist beliefs towards Baptism (scroll to the bottom). His results showed that clergy are almost evenly divided into three main understandings of Christian baptism, two of which (66% of responses) define baptism as an act done for an individual, with only 34% seeing it as a Sacrament of a community. And laity? Only 8% see it as a community Sacrament.

What does it mean when only one-in-twelve of our lay leaders see the sacrament of baptism as a corporate (rather than an individual) experience?  Our baptismal services are very clear that there is a mutual vow made before God and with one another.  Both the newly baptized and the community of faith bear responsibility, each to the other.  The lack of understanding appears simply explained:  less than ten percent of active church members remember any teaching being offered to the congregation about the sacrament of baptism.  (Compare this to 27.8% of clergy who claim that they teach the congregation about baptism on a regular basis)…

76% of pastors report that they will baptize any child, whether the family has ties to the church or not; 96% will baptize any child related to an existing church member (though the child and his or her family may have no direct ties); only 14% place any kind of expectation on the family of the child to be baptized that they should become active or involved in the community of faith.

Count me among the 14%. This blog has regularly championed the communal aspect of Baptism:

So I admit I am grieved when research shows that so few laity (and pastors!) emphasize the communal nature of the Sacrament.  That so few pastors take the time to educate what baptism means.

And yet the research shows that Methodists (generally) do not do engagement as to what Baptism means, and why they (as communities of faith) should link their identity with the child being baptized. We just don’t know at the same level.

But it’s not too late.

After every baptism that we have at my church, I remind the church that we are now no longer the same. We have changed. We have a new member of the Body of Christ, and we are a new people. This new Body of bodies will not react or live the way it has in the past.

With every baptism, we set ourselves into an unknown future, uncertain, and yet full of hope in the mystery of God.

That’s a sentence that can never be uttered in Furtick’s church. And it is my prayer that it can be uttered in yours. And that the people know what it means every time they are reminded.