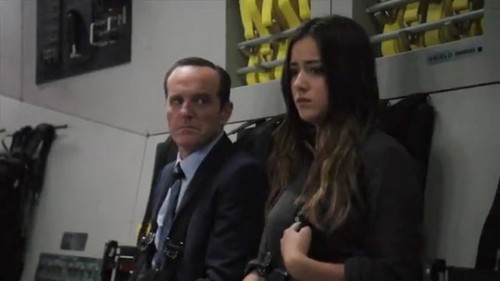 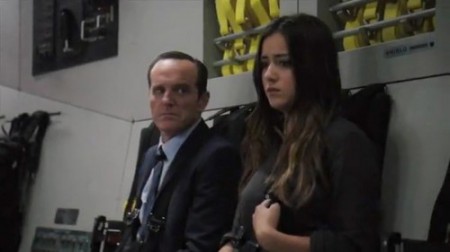 Agent Coulson has found out the truth of Skye’s family origins: she was saved as an infant by SHIELD agents who were then killed. She was passed around from home to home for a while to keep her out of harm’s way of whoever killed the agents. Coulson–who has had enough of secrets–tells Skye this classified information.

When Coulson is later talking to Agent Mae, he explains how the conversation went:

Coulson: When I told her, it shattered her world. Her lifelong search led to stories of murder and now it is too difficult to continue. Her search is over, her story ends here. But you know what she said? She said no, her story started here. Her whole life she thought she wasn’t wanted, that she didn’t belong, that every family that took her in didn’t want her to stay, didn’t care. But all that time, it was S.H.I.E.L.D. protecting her, looking after her.

That’s what she took away from the story. Not the family she’ll never had, but the story she’s always had. Here I am telling her something that could destroy her faith in humanity and somehow she manages to repair a little piece of mine.

The narrative that Skye told herself is that she wasn’t loved, wanted, or cared about. She built up this story in her head, based on the reality around her, and told herself she wasn’t important.

But the truth was that all along the way–every step of her early life–there was a family around her. Agents who would slip in and out of her life and move her whenever it got too dangerous. And then she found her way back into S.H.I.E.L.D. when she was an adult, desiring to serve the greater good through an organization that she knew nothing about but some part of her yearned for it.

This is the moment of conversion for the soon-to-be Agent Skye. Conversion as depicted in this scene is not where someone accepts Jesus into their heart and is saved from eternal damnation. Conversion is rather depicted as when we shed the false narrative that we built up and replace it with a true narrative that gives life.

Will we see a full Wesleyan Grace in this series?

So I wonder if we will see sanctifying grace in a future episode so that we get a hat trick of Wesleyan Grace.

Or perhaps the grace is already there.

Perhaps that grace can be experienced by all who live out Coulson’s closing lines from the episode:

Coulson: The world is full of evil and lies and pain and death. And you can’t hide from it. You can only face it. The question is when you do, how do you respond? Who do you become?