Home/Church Talk/The River of Grace wants to change course, if the Church would let it 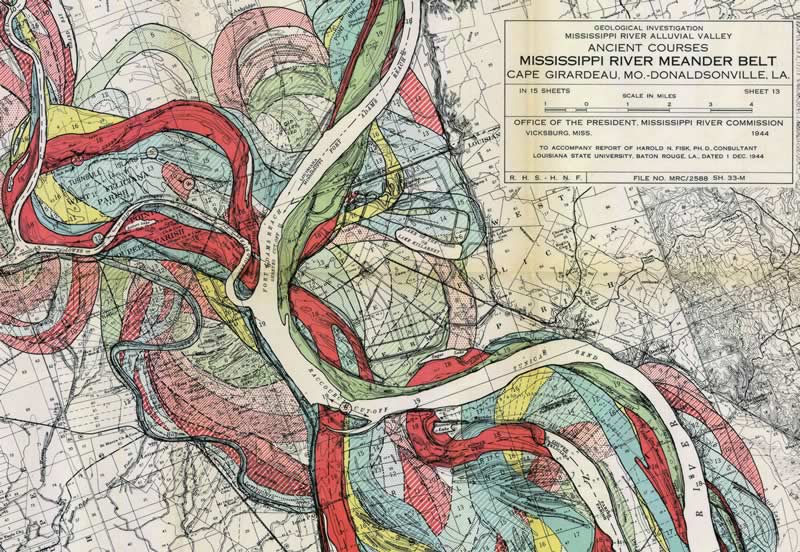 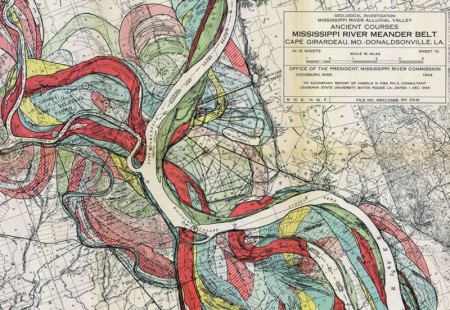 One of my church members told me a startling fact: Did you know the Mississippi River in central United States wants to relocate? It does–and drastically so! Over its history, the River has changed course hundreds of time, gone through  entirely different states than its present course. As you can see in the above map (source page – click to enlarge) the Mississippi’s meanderings has even created the entire state of Louisiana.

Why doesn’t the river change now?

Why has it not done so in recent years? Because humanity has stopped it and is actively working to keep it in place:

“The river has a job to do,” says Robert Criss, a professor of Earth and planetary sciences at Washington University in St. Louis. “Its job is to move water and dirt to the Gulf of Mexico. It has adjusted its morphology in the most efficient way that it can to do that. But of course we think we know better, so we’ve changed that.”

We set the river at roughly the same place it was in 1900. We built infrastructure that complemented the River at that placement and level. Artificial methods like Levees and Weirs and Dredgings and Spillways keep the River mostly in place. The longest article on this subject (in the history of the world!) can be found here in the New Yorker.

And yet as humanity tries its best to stop the natural meandering of the River, it has devastating consequences:

If the main thrust of the Mississippi took the Atchafalaya route and bypassed New Orleans to the west, the city would need a new livelihood and America would need a new port city and all the infrastructure and pipeline that comes with it. That’s not even counting the losses from the areas that would flood and become unusable through the Atchafalaya basin.

The results would be economically crippling, at least for several years. And the same argument can be made all along the entire 2,300-mile length of the river (and along every major waterway in America). So we instead must keep building, and occasionally making undesirable tradeoffs, like the one the Corps of Engineers was forced to make two weeks ago when it blew levees along the Mississippi to save the town of Cairo, Ill., flooding 130,000 acres of Missouri farmland and devastating entire agricultural communities instead.

Through artificial methods, the people in power and authority have kept the river in an uncomfortable place, inefficient for what the river is called to do: bring silt and sand and nutrients from the north and bring it to the Gulf of Mexico. Humans have stopped the dynamic river from doing its purpose most efficiently and now are in a losing battle to keep it static.

Have we done the same with God’s River?

I think we have done the same with the River of God’s Grace that flows through the Church.

God seems to want us to flow the River differently and deliver more grace to more people. God’s grace is seeking new fertile soil in left-out areas of the church riverbeds.

And yet the Church wants to hold it back. Like the Mississippi, these meanderings of the River of God’s grace have devastating consequences for the people in power. And for the regular river-drinker, if the river moves over to be with “those people,” why would they want to drink downriver from them?

Like the Mississippi, holding back a River of this power has consequences. The age-old barriers are leaking. The people who tended the river structures are aging out and doing their own meandering away. Other Rivers are gaining in attraction, even those who do not recognize a divine source of their river (small ‘r’).  And yet we continue to create artificial controls to keep out unwanted tenders and methods to ignore River shifts to make sure the people in power in the Church retain power…just long enough.

Diana Butler Bass calls this the “rearguard” of the Church:

The river of history does not seem to be on the side of hierarchical church control; rather, history seems to be moving in a the direction of what Thomas Friedman might call “flat church.” The tides are pulling most ecclesiastical boats toward bottom-up versions of faith. Hierarchical church control is, as Harvey Cox argues in his book The Future of Faith, a “rearguard attempt to stem a more sweeping tidal change” toward a new experiential, inclusive, and liberationist view of God and faith.

The solution? We lose something either way. We lose influence and our established place in society if we let loose the River of God’s grace. We lose authenticity and ease of access if we continue to hold back the River.

Thankfully, Jesus also had to decide what to do with the River in his time.

But Jesus found a third way: a way to give freedom to allow God to be God and allow the River to flow, but he built a way of being for the tenders of the River. He gave them instructions, he gave them lifeboats and paddles, and assured them that even if they drowned they would be with Him again. Rather than a system of command and artificially control, Jesus gave us a grassroots faith found in small communities and in direct access to the River of God’s grace.

May we find the same third Way today: a way that allows the River of God’s grace to flow where it will, and to give recognition to those who are called to tend to the River, regardless of any quality or status. But may that Way also give us a method and a set of practices that allow us to retain accountability and connection with one another so that the River may still be tended, and the temporary structures put up so that more and more can drink.