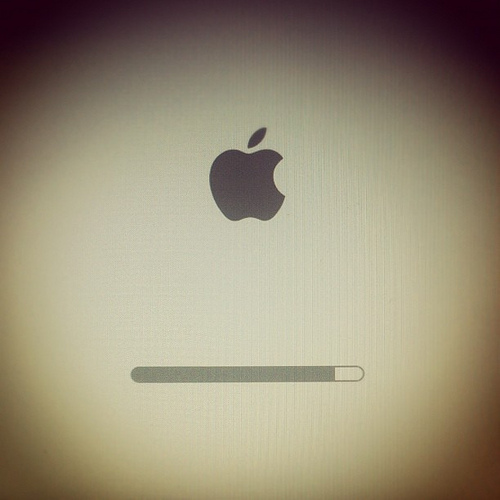 My spouse and I both have iPhones. When the software iOS 7.0 came out, I upgraded my phone but my spouse did not: she liked the old version the way it was, and according to online reports, 6.0 ran faster than 7.0 did. But we can share apps, everything is compatible, and we are both happy with our phones. Our hardware is the same, but the software is different. I can do different things with my newer upgrade than she can, but we are both happy.

When these types of system updates come out, the odd thing is that people will be running two different versions of the same software and yet they are usually wholly compatible: Windows XP users can share with Windows 7 users; Mac Snow Leopard can share with Mavericks; iOS 5 is on the same iPhones as iOS 7. So while the hardware is the same, the software can be different depending on what works best.

I share that reflection because I think it is a good parallel to what is facing the United Methodist Church beginning in 2013: we are in the midst of two different operating systems within the same church hardware. Most of United Methodism is on version 1.0 but growing numbers of United Methodists are using Methodism 2.0: it’s the exact same as 1.0, but it just removes the prohibitions against full inclusion of LGBT people.

It is my contention that we are in the midst not of a schism between two different churches but we are rather in the midst of an update from Methodism 1.0 to Methodism 2.0.

How is this happening? It’s the difference between spiders and starfish.

In Brafman/Beckstrom’s The Starfish and the Spider: The Unstoppable Power of Leaderless Organizations, they trace the pattern of the interactions between centralized (spider) organizations and decentralized (starfish) organizations. Why are they named like that?

To Brafman/Beckstrom, they saw value in both types of organizations but ultimately said that starfish organizations are more adaptable to the world around them because the change comes from the bottom-up rather than from the top-down.

In the United Methodist Church in 2012, we saw the failure of top-down change. General Conference did not succeed where we had hoped. The Reformers failed to reform through the PlanUMC and the Super Bishop and the Guaranteed Appointment and other ways. The progressives failed to change the UMC’s stances on LGBT inclusion and other social issues. Even the conservative caucus groups kept up the drumbeat of acrimony because they only got 90% of their goals. 2012 was a frustrating year as we dealt with a spider operating system in the UMC.

It is my contention that in 2013, we saw the beginnings (or to some, the culminations) of the successes of bottom-up change. A radical shift from a spiderlike UMC to a starfishlike UMC is taking place. While I have other examples, no other topic exemplifies this shift better than LGBT inclusion.

Consider all the regional changes that have taken place after the global UMC did not change the global stance on LGBT inclusion in the UMC:

These are starfish changes as they do not affect ministry in other regions of the country. If a UMC ordains a gay clergyperson in New England, with the support of their peers, it does not affect ministry in Alabama. In a populist UMC where decisions are made by your peers and not by a paper trigger, such variety of regional expressions will continue. In the face of the spider global UMC continuing the 40-year restriction against LGBT inclusion, the starfish UMC has shifted from changing the spiders’ mind to just doing ministry in starfish ways.

In 2012, the Western Jurisdiction held their first “Transforming Ministry” Conference in California. One of the presenters was Brian McLaren who talked about the difference between a movement and an institution. One of the attendees there sent me his notes which made this distinction (keep in mind these are notes not a direct quote from Brian McLaren):

Effective institutions consolidate the gains of a movement.

Brilliant ones keep the movement alive.

Anyone remember President LBJ calling MLK Jr to “turn up the heat” so that he could pass civil rights legislation?

2014 and onward is our Methodist call to “turn up the heat” through acts supporting full inclusion of LGBT folks. There are groups already doing this and you can find and support them if you wish.

But it is more than that for many of us.

This is the opportunity for the UMC to save the institution from itself. This is the chance for those in Methodism 2.0 to become software evangelists and share the successes and the joys of ministry without LGBT restrictions. Of LGBT clergypersons being lifted up and their successes recognized. Of couples being celebrated. Of the Western Jurisdiction being proud of their United Methodism not quiet about it. Of weekly “We Did” stories that share this 2.0 mindset.

If you are in a fully inclusive region of the country: share your successes, share your joys, share the good acts of mission, show how LGBT inclusion is not an alleged “poison pill” on ministry but is a viable alternative to Methodism 1.0–BE THE CHURCH. If you are not in a fully inclusive region, find ways to model what full inclusivity looks like either at your local church, your sunday school class, or mission field–BE THE CHURCH.

A Better Way than Schism

2014 is the year when the different operating systems in church hardware became more clear. Like two iPhones that use different software, the UMC at present can operate side by side, town by town, region by region. They are not two different churches but one. Their future is not in schism but in integration and consolidation perhaps into a new operating system altogether where our current ones are tossed aside like Windows Vista.

Because the more people that see how Methodism 2.0 (with its upgrade of full inclusion) is just as amazing and spirit-filled as 1.0, the more people will be ready for an upgrade come General Conference 2016. And in the meantime, 1.0 and 2.0 can continue to worship, serve, learn, and preach Christ resurrected side-by-side, making disciples of Jesus Christ for the transformation of the world.

(Disclaimer: written with the full awareness of my privilege of serving in a Methodism 2.0 annual conference in the hopes that privilege spreads)