You are here: Home / Church Talk / What the Church can Learn from Cosplay 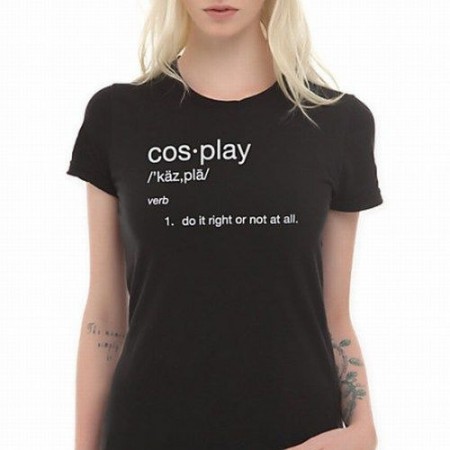 One of my favorite days each year in Boston was the big Anime Convention. My spouse and I would make sure to be at the Prudential Center during that time to check out the “cosplay” or the amazing costumes and characters that the participants became. Whether they were in groups or alone buying food at the food court, it was a fascinating time looking in on a culture that I’m not a part of but I really respect for their craftsmanship and their ability to geek out with reckless abandon.

But not everyone has the same concept of what cosplay is, and the difference is a helpful lesson to the Church as well.

Cosplay: For Elites or Amateurs?

Cosplay is short for “costume play” where nerds and geeks dress up like their favorite series characters, usually from sci-fi, fantasy, gaming or manga genres.

A shirt recently for sale at Hot Topic (pictured above – it has since been removed) depicts cosplay as “do it right or don’t do it at all.” The shirt got some flak from Amy Radcliffe—but not because no one pronounces it like a ‘z’:

Anyone who wears a costume in public is brave. It’s not easy to put yourself out there in the world. Some people are 100% comfortable and don’t care what others think or say, but many are not. This horrible t-shirt goes to the heart of cosplay fears, and it’s not okay…

There is no “right” way to cosplay. If you can’t sew and instead make a cardboard version of a costume, that’s fine. If you apply Rule 63, that’s good too. Not the right shape, height, color of the character you’re cosplaying as? Doesn’t matter. Cosplay the characters you love, have fun, and don’t pay attention to what anyone says about it….dress up like whomever you want, it’s all right…do it, have fun, everyone wins

It’s bad enough for those of us in the community, but what kind of elitist signal is this sending to non-geeks or people who want to cosplay and have been too shy to do so? It’s bullying captured in a t-shirt. Ugh.

In short, the tension is between outsiders–plus some elite cosplayers who value craftsmanship and authenticity–and those who love their characters and come in a box with a glitter-glued t-shirt. As I know intimately, nerds can be bullies to other nerds, especially in areas where we think we know more or better than other. The best solution often comes from other nerds who remind everyone that passion is the currency that cosplayers value, not perfection.

I think the Church can take a pointer from this discussion. Sadly, I think many of our church programs and outreach initiatives take this mantra to heart: Do it right, or don’t do it at all. The sentiment is that if you are going to start something new, you have to have figured it all out. It has to pass the Ministry Committee and get the pastor’s stamp of approval. If it costs money, it needs to find the money before it starts. There’s a ton of hoops to jump through and by the time you do it, the opportunity may have passed you by.

In previous blog posts, we’ve examined a hope that the Church in the 21st century would not idolize perfection in this way and would structure their ministries and missions to value passion over perfection:

The common theme of the above posts is that while  holistic forms of ministry crafted from the top down will always be excellent in quality, they are often slow-moving and unable to adapt to the shifting sails of ministry.

Like the cosplayers who just want to come and participate in ComicCon as Deadpool (the proselytizer or otherwise), whether their costume looks great or not, the point is that they are participating, gathering information, getting tips or offering suggestions to other cosplayers, and being in the community. The church would also do well to–once in a while–stop with the head games and master plans and instead just do it: participate, seek to live like the community around them, and participate in the give-and-take nature of a place that doesn’t require a committee-approved act of intentionality.

Is there a place for master plans and head games? Of course. Are there lines you shouldn’t cross? Of course.

But the reality is that you may get further inroads into a community by being involved already in just little ways, the aggregate of which may lead to something amazing, if your timing and involvement is just right. It’s all about not letting our processes and relentless pursuit of perfection get in the way of participating in a community until we’ve got it “just right.” No, just go, and error-correct along the way, and you might even find people who will help with that direction who otherwise wouldn’t “fit into” a masterfully planned program…and that may be exactly what you were meant to do.