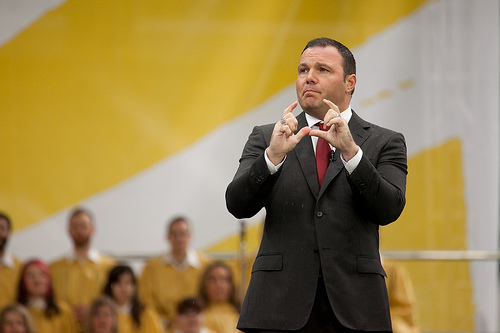 The lesson that we can take from Mark Driscoll’s incident with the Christian radio station that confronted him with allegations of plagiarism is this: It’s okay to steal from your friends.

The story thus far is that Driscoll went on Janet Mefferd’s show to discuss his new book. What he got was two questions about his lying about his books being confiscated at MacArthur’s strange fire convention and his plagiarizing of sections of his books. Driscoll was not cooperative with the interview and it was a bad one. The radio host Janet Mefferd then published a PDF of all the side-by-side comparisons she had found so far. The Internets waged message wars back and forth.

There was a mini-controversy, but that’s nothing compared to what happened next:

The fallout up to this point from accusations made by syndicated radio talk show host Janet Mefferd that author and megachurch pastor Mark Driscoll plagiarized in at least two of his books includes her pulling the allegations from her website, an apology to the outspoken Christian leader, and most recently, what looks to be the resignation of a dismayed producer from her show.

Wow. So a legitimate news story with substantial research is pulled and the radio host censured? Why?

The booted producer Ingrid Schlueter made the following comments that Warren Throckmorton archived:

I was a part-time, topic producer for Janet Mefferd until yesterday when I resigned over this situation. All I can share is that there is an evangelical celebrity machine that is more powerful than anyone realizes. You may not go up against the machine. That is all. Mark Driscoll clearly plagiarized and those who could have underscored the seriousness of it and demanded accountability did not. That is the reality of the evangelical industrial complex.

I’m inclined to believe Schlueter’s comments, especially as Christian Post notes the connections between Tyndale (who publishes Driscoll’s books) and the parent company of Mefferd’s program. The deletion of all the stories, blog posts, side-by-side PDF comparisons (here’s an archive, here’s the interview backup, and here’s more that have emerged and even more that have emerged), and other material from Mefferd’s website shows the severity at which the Complex came down on them. A bit disconcerting…

When Plagiarism is Okay

It was fun seeing people initially twist themselves into knots trying to justify Driscoll’s actions. I was  shocked at Todd Rhoades  saying that it’s not plagiarism if you steal from your friends. It sounded so ludicrous, as even by Rhoades’ own checklist as to “what constitutes plagiarism,” well, Driscoll fails the test.

But then Driscoll and Tyndale came out with a joint statement that says…exactly that.

Pertaining to his Tyndale book, A Call to Resurgence, Tyndale believes that Mark Driscoll did indeed adequately cite the work of Peter Jones. While there are many nuanced definitions of plagiarism, most definitions agree that plagiarism is a writer’s deliberate use of someone’s words or ideas, and claiming them as their own with no intent to provide credit to the original source. Both Mark Driscoll and Tyndale completely agree that the above definition describes an ethical breach and therefore work hard to provide proper citation and to give credit where credit is due in all their works.  Tyndale rejects the claims that Mark Driscoll tried to take Peter Jones’s ideas and claim them as his own. Moreover, at Pastor Driscoll’s invitation, Peter Jones has written on the Resurgence website, and spoken at a Resurgence event, as well as a Mars Hill workshop. Quite the opposite of trying to take Peter Jones’s ideas, Mark Driscoll has provided several opportunities for Peter Jones to publicly express his ideas to a large audience.

And from Driscoll himself:

I personally contacted one of the editors of the work that was not rightly attributed. Thankfully, he and I have a longstanding relationship, which includes him teaching at Mars Hill and publishing a book with us through Resurgence. He’s a godly man who has been very gracious through all of this. I am deeply thankful for his acceptance of my apology, as I deeply grieve this mistake with a brother in Christ whom I appreciate very much.

Really? It’s okay to steal from people and sell/pass off as your own ideas…because the people you stole from were your friends?

While I’m not part of the Reformed movement or consider myself to be an Evangelical, I do agree with what a prominent member of both tribes says:

It’s not just about plagiarism. I can believe the cut and paste was made without the right footnotes out of carelessness, that it was not carried out with an intent to deceive. It happens. So, no, it’s not just about plagiarism. I can believe Pastor Mark is not culpable in this. But he is responsible. If you understand the distinction. It’s about failing to take responsibility for the book with one’s name on it. It’s about throwing loyal friends under the bus. It is contrary to the kingdom of God we are called to proclaim and embody for under-shepherds to horde credit and shift blame… This latest episode is just the latest example indicating an evident lack of accountability and personal responsibility. All along, I’ve trusted that Pastor Mark had the right people around him, speaking the hard truths to him. I assumed those voices were there and authorized by him to keep him honest. I no longer believe this.

Am I guilty personally of plagiarism? Absolutely. I’ve fallen short. In my early sermons, I bolstered my own points with other people’s materials in sermons without proper attribution. But in print, in published articles and on this blog, I reference everything and give credit where credit is due–friends or not–and even in my latest post without a name attached to the quote, I am 100% clear that the substance was not my own. Accountability and personal responsibility are big parts of denominations, and thus I am not surprised that non-denoms like Mars Hill have a lack of accountability structure in place regarding such things (though in this case, Mars Hill’s accountability structure is creeptastic)