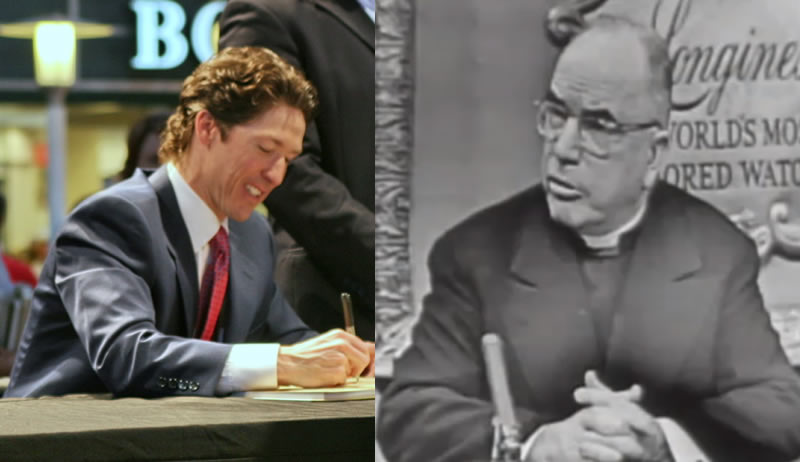 I’m always inspired by people speaking with prescience about their future–which could be our present. While the terms and situations are not always identical, I do think there’s something important about this conversation.

Facebook friend of the blog Zach posted a video of an interview with Bishop G. Bromley Oxnam, who was a fellow Boston University School of Theology graduate (there’s a room named after him there, in fact) and was responsible for the relocation of what is now Wesley Theological Seminary in Washington D.C.

This interview on the Longines Chronoscope was made in the 1950s. The whole thing is great–touching on segregation, unification, National Council of Churches, and the atomic bomb. But he also is asked about what he thinks about “the power of positive thinking” at the 5:00 mark. Fast-forward to there:

There is value in positive thinking. There’s value, I suppose, in any faith that enables a man to move out in strength toward the future. But I think there is danger here that we may identify Christianity with the cult of success. And assume that because a man is a Christian therefore he must be successful in monetary terms or in terms of the occupation  he happens to hold. There seems to be an assumption that if you just think positively, you are going to be President of the company tomorrow morning. But there aren’t enough openings along that line.

These comments directly correspond to the rise of Health and Wealth theology, which is the tradition that Prosperity Gospel and Prosperity-Lite Gospel preachers like Joel Osteen.

How does Bishop Oxnam articulate the difference between the Gospel and the power of Positive Thinking?

We mustn’t forget the fact that Christianity is a religion grounded in love that at its heart is the symbol of the Cross. We move out in terms of sacrifice, that people are transformed as we spend our lives for others. While that isn’t denied in positive thinking, there’s a certain emphasis here that I think needs to be watched very, very carefully.

I would suggest watching the whole clip…there’s a lot to like in the variety of topics, and a lot to shake your head about (his assumption that all churches would become unified under the NCC is sadly misplaced).