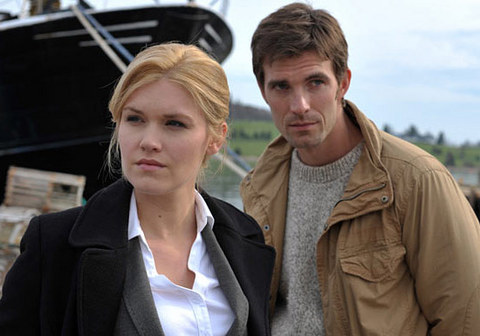 Read on for two geeky sources that yield theological reflection on the role love has in taking down systems of control, no matter how big.

One of the surprise joys for my sparse TV viewing has been Syfy’s series Haven [imdb].  Based loosely on a Stephen King novel, it involves a coastal town in Maine called “Haven” whose residents develop supernatural powers called “troubles.” The protagonist Detective Audrey Parker is immune to these “troubles” and uses her immunity to solve crimes and stop people’s troubles from running amok in the small town.

One of the extended plot points is that Audrey actually IS troubled. Her trouble is that she has lived in 3-4 separate time periods as the same aged person who is involved in the troubles and then disappears for 20 years or so (and the troubles disappear while she is gone too). When she returns, she loses her memory and doesn’t remember her previous existences.

But in the Season 3 finale, Audrey is revealed to be the linchpin in a method that contains the troubles. A mysterious man reveals that every 20 years, Audrey (or whatever her name is) emerges sans-memory from a time-traveling barn which evokes the troubles. She wanders the earth for a few years, solving people’s trouble-related problems, and then she is drawn back into the barn, and when she disappears, the troubles disappear for 20 years too. It’s a system of control for the troubles, created for/by a yet-unknown reason.

But all will not go according to plan. The episode ends with Audrey submitting to the system and going into the Barn. But as it is about to disappear and be taken away, her love interest and crime-solving partner Nathan jumps into the Barn to pull her out, possibly breaking the system of control and yielding unknown consequences for Haven, Maine. 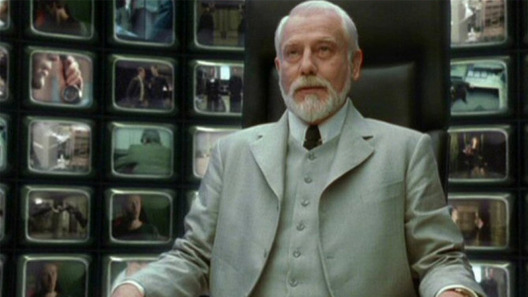 Haven’s episode is a 2012 parallel to the 2006 movie The Matrix Reloaded starring Keanu Reeves as Neo, a human born with mystical powers to control and augment a cyberworld called “the Matrix” that 99.9% of the rest of humanity is enslaved into.

In that movie, Neo finally gets to the heart of the Matrix and confronts the Architect of the cyberworld, who reveals that Neo is not unique. There have been six iterations before him, each given the same scenario of a savior for humankind. And each is presented with a choice: they can either go back into the Matrix and restart the cycle again, ensuring humanity’s continued survival (but enslavement), or they can continue to fight the Matrix and their remnant would almost certainly be destroyed, extinguishing the human race.

The scene is amazing because we find that Neo is different from the rest of the iterations in that he has had a personal experience of love with another: the female hacker Trinity. And this more personal experience of love has changed Neo more dramatically than the perhaps more general notions of affection and responsibility that the previous Neos had experienced. The scene ends with this:

The Architect:Which brings us at last to the moment of truth, wherein the fundamental flaw is ultimately expressed, and the anomaly revealed as both beginning, and end. There are two doors. The door to your right leads to the source, and the salvation of Zion. The door to the left leads back to the matrix, to her, and to the end of your species. As you adequately put, the problem is choice. But we already know what you’re going to do, don’t we? Already I can see the chain reaction, the chemical precursors that signal the onset of emotion, designed specifically to overwhelm logic, and reason. An emotion that is already blinding you from the simple, and obvious truth: she is going to die, and there is nothing that you can do to stop it.

*Neo walks to the door on his left*

The Architect: Humph. Hope, it is the quintessential human delusion, simultaneously the source of your greatest strength, and your greatest weakness.

Paul in his letter to the Corinthians church writes about the relationship love has with other cosmic forces:

In both the above stories, love overcomes the prophecies and the systems of control. Even though the love portrayed in the above stories is far from perfect, it doesn’t have to be perfect. It simply goes  against the numerical values of “the many outweigh the one” and the manipulations that draw on that heartstring of logical sacrifice for the greater good. Indeed, this imperfect love breaks through that system of control for entirely selfish ends: to be with the beloved and to refuse to believe there’s only one way. It’s the Kobayashi Maru of relationships.

So wherever those situations are where you are sacrificing yourself for the greater good, working overtime for the good of the company, letting others get ahead while you stay behind, it is time to consider whether you are submitting to a system or whether you are embracing a love of self, God, and neighbor that allows for mutual growth and transformation. Because any other type of love may be something else entirely.

Thoughts? Other take-aways from the above meandering?