You are here: Home / UMC / The perils of wearing tinted lenses on Twitter

The wonder of Twitter is that a seemingly innocuous tweet can turn into a riot because of the lenses that folks use to twist tweets into predetermined categories.

I just got back from Exploration 2013, a discernment event for young adults considering ordained ministry in the United Methodist Church. It was a terrific weekend full of energy, excitement, cautious consideration, and deep discernment in twos and threes and small groups of young adults. I loved being on the Design Team and getting to know the next generation of spiritual leaders. My role for the weekend was to lead a workshop and to be on the social media team.

And it is in that context that two responses to two of my tweets about the event just didn’t match the event at all. And since I have a blog, you get to know about them too. 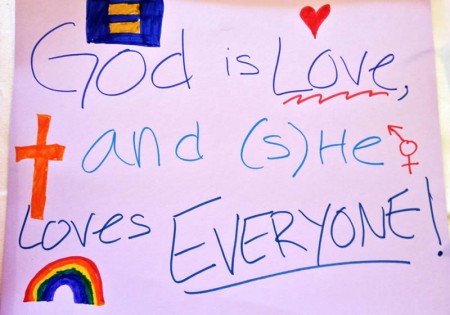 Tweet #1: The first tweet I will highlight is that I sent out a lot of tweets that had pictures. On the last day, the artwork that the young adults had created in the “Sacred Space” reflection area was up for display and pickup by the participants. I sent out one photo (posted above) of the artwork and gave context in this way:

UMJeremy: “God is Love and (s)he loves everyone” reflective artwork from the Sacred Space area. #explo13

To this tweet, one of the pastors of a  Top 100 United Methodist Church Rev. Talbot Davis posted in response. I’ll include our full exchange:

TalbotDavis: This is why it would be awfully hard for a conservative to attend explo13.

UMJeremy: funny. I had conversations with about 20 of them. Can we celebrate that we give people freedom to reflect? #judgenot

TalbotDavis: Do you have pics of any art reflecting a more traditional understanding of God language and marriage? explo13

UMJeremy: those were a dime a dozen (Lord, He, His) so I took pics of the outliers. Welcome to twitter, Rev. Davis. 😉

TalbotDavis: Wish you’d taken pics of all those celibacy in singleness & faithfulness in heterosexual marriage posters.

UMJeremy: hahaha. Naah. Just celebrating calls to ministry by young people. No need for those fixations when it is about them.

From the exchange, the lens of “inclusive language and marriage equality are bad” frames a conversation about young adults going into ministry. The conversation was fixated on those culture wars instead of on how those culture wars were impacting those students considering ordained ministry. It tinted the good pastor’s perception of the event like a lens that fuzzed out the context of the artwork.

I’ll be charitable and say that the perception was that this artwork was from the top-down and it was what people had to believe. That’s not the case: it was artwork by a participant in a reflective space, so it was bottom-up. If that wasn’t understood, I get it. But I suspect there was a lot of tinted lenses being used in the response as well. 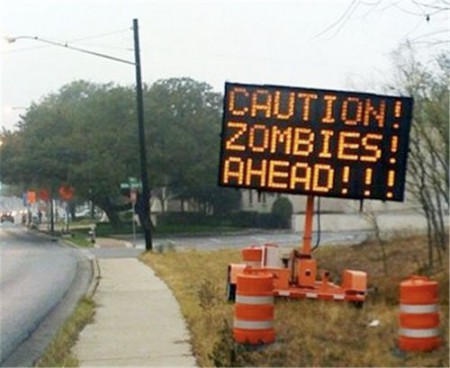 UMJeremy: What from #cob2013would inspire Explo13 YAs to go into ministry?

– Bishop Elaine Stanovsky: Stay bc God works in the world thru the church & we are God’s partners. My ?: What should inspire bishops to stay UM?

Relevant and brief, but helpful! Thanks Bishops!

To this tweet, however, a staffer at the Institute on Religion and Democracy (a caucus group started by non-Methodists who seek to distract the UMC from being involved in social activism by focusing on wedge issues like LGBT equality) posted this:

– John Lomperis: Only seek ordination if you’re on board w/ #umc core doctrine. No need for more clergy w/ whole ministry based on a lie.

Wow. That would be super-inspirational to the attendees, wouldn’t it?

The error here is that the tweet doesn’t fit the context of the event. The aggressive language (using terms like “lie” and “only”) seeks to dissuade young adults who have doubts or haven’t figured everything out yet–in short, a majority of people aged 18-25, which was the age range of the event. There was plenty of tough love at Exploration: plenty of comments about the difficulty of ministry and of considering our motivations to seek it. What there wasn’t any of was just rigid toughness–without love.

The tweet falls far short of offering inspiration or guidance to the participants at Exploration because it fixates on the agenda items instead of caring–or even offering tough love–to tomorrow’s future leaders. Like a zombie fixated on “braaaaaaaaains” the staffer focused on their culture war plans rather than being helpful to the question at hand.

Lest you think I’m just being partisan and badgering the snakes, here’s a tweet also sent in response to my question by Rev. Drew McIntyre. We “converse” a lot on Twitter and disagree publicly; however, here’s what he wrote in response:

– Drew McIntyre: Learning to love imperfect communities is an excellent introduction to the #umc and ministry in general…anywhere.

That’s how you offer tough love and point out the realities without being aggressive or fitting a context into an agenda. I shared these exact words to a small group and they appreciated it. Thanks Drew.

Abraham Lincoln said “If you look for the bad in people expecting to find it, you surely will.” Yes, I am likely guilty of that too. But I highlight the two tweets above to point at the perils of discussing online when we bring tinted lenses to the table and view everything in a genre with those lenses. While the comments would have been perfectly appropriate elsewhere, the context didn’t merit their response.

As a practitioner in these areas of church and social media, I feel it’s important that we point out when we don’t use social media appropriately and fall short of offering a graceful presence online where young people might see it.

Let us pray for our young adults seeking to be in ordained ministry. May they overcome our shortcomings and our culture warriors who wield a sword when a chair and a coffee cup is more helpful.