Home/United Methodist Church/The Tent and the Tabernacle: Is worship bettered by permanent space? 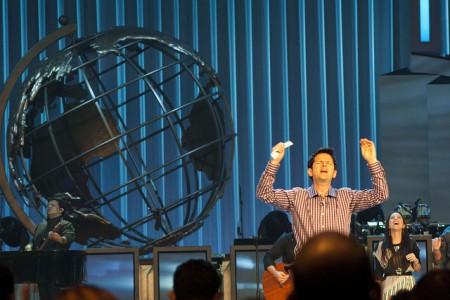 There’s a scene in the Bible that causes me to wonder if our worship spaces are really important to the life of faith. In Luke 19:37-40, Jesus and his disciples are worshipping loudly and the Pharisees tell them to get off their lawn. Here’s the scene:

As he was now approaching the path down from the Mount of Olives,  the whole multitude of the disciples began to praise God joyfully with a loud voice for all the deeds of power that they had seen, saying, “Blessed is the king who comes in the name of the Lord! Peace in heaven, and glory in the highest heaven!” Some of the Pharisees in the crowd said to him, “Teacher, order your disciples to stop.” He answered, “I tell you, if these were silent, even the stones would cry out.”

This scene makes me wonder if the stones really do cry out in our worship spaces in a way that having a permanent worshipping space betters our worship rather than hinders it.

[Ed Stetzer is] noticing more of these large churches investing in multiple sites with substantially smaller venues than their main campus rather than expanding the size of their current site or investing in sites of roughly equal capacity elsewhere…Ed adds a possible benefit specific to multi-site megachurches where the “other” venues are substantially smaller: “multi-site may very well lead to smaller (and, I hope) recyclable buildings that does not lead to a proliferation of large, empty church caverns when neighborhoods change.”

In short, multi-site strategies (we call them Walmart churches here at HX) are not to build a buncha churches but to rent space or repurpose space in those neighborhoods so if they change then there’s less cost to relocating closer to where the people are. They just close up their perpetually temporary space and move.

And when their location or configuration isn’t positioned to achieve the mission because of any number of changes, the congregation (main campus) re-allocates resources and often relocates meeting facilities to ensure the regional mission can be accomplished as optimally as possible.

There’d have to be a whole accountability/decision-making process around it, but I really like the idea of our churches moving from being tabernacles that are stuck in one place to tents that move around and go where the people go.

But What About Worship? 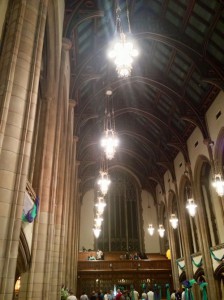 Here’s my pushback: I think this strategy works well for evangelical mega-churches because contemporary worship style doesn’t require a permanent space. Sure, there’s a lot of tech, but the tech can adapt to whatever room they have. The use of screens and a lack of iconography means that a worship service can be set up in an abandoned Wal-Mart or a house just as easily.

My claim is that traditional worship needs permanent space to be what it is best at: be a liminal experience of the divine.

One of my faults is that I’m a worship space snob. My first church job was a receptionist/wedding facilitator at Wesley UMC in Oklahoma City which has beautiful gothic architecture and cherubim that hold up the lamps in the air. I recently worshipped at Metropolitan UMC in Washington D.C., (see the pic) which was a fantastic experience and I wandered the side areas for a half hour looking at the artwork. Finally, my local church First UMC in Portland, Oregon, has one of the largest pipe organs on the West Coast with high ceilings and glass to a greenspace on one side and stained glass mosaic on the other. None of these churches can pack and move at a moment’s notice and have the same feel or essence to the worship that they have now.

I say all of that because I suspect that traditional worship uses established space in ways that contemporary worship doesn’t. But don’t get me wrong:

So I like the idea of reducing building maintenance and being able to move where the people are. But at what cost to the experience of the worship style that is amplified by a contemplative space?

My personal preference is that I appreciate a permanent traditional space that draws out spiritual exploration moreso than an evangelical worship space that is built to manipulate emotions. The screens, the big speakers, the emotion-laden songs…my spirit doesn’t like to be bashed over the head. My spirit grows when I’m drawn into a stained glass, or when I look at a flying buttress while contemplating a sermon point, or sitting in a pew and I fiddle with the same cracks or warps that people have for 100 years or more. That sense of being a part of something old and traditional and established is just not found in converted Wal-Marts. My faith is not dependent on the space…but all other things being equal, my worship is bettered by the space it is in.

Do the stones shout? And if they do, can a more missional church also embrace permanent space for worship? Or is tradition the part of our Sources of Authority as United Methodists that we are willing to give up to more easily be where the people are?

Your thoughts? Does permanent space better traditional worship–or contemporary worship for that matter? And if so, is having those terrific spaces that may not be as close to the population centers worth the trade-off?