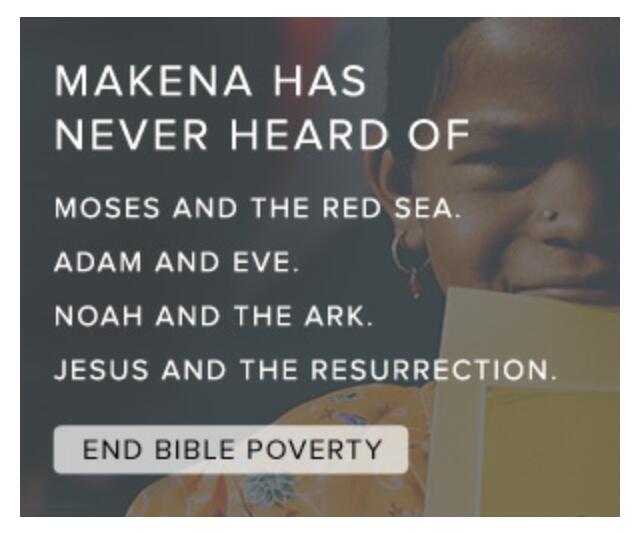 A few weeks back, Twitter followers know that I posted about an ad that I saw and really appreciated. Here it is: 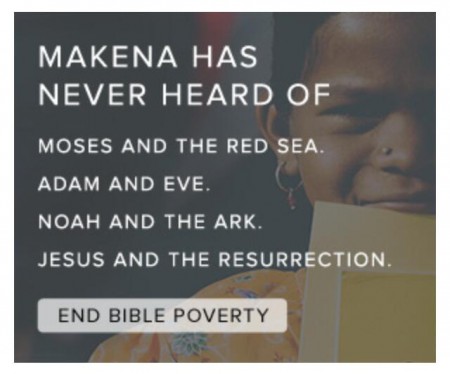 I’m really glad for this campaign called “End Bible Poverty.” Jesus himself judges us for who we bring Bibles to, remember? In Matthew 25, when the King is judging the sheep and the goats, Jesus clearly says

At least that’s how I remember it.
Because biblical poverty trumps all other forms of poverty. Right?
Right?
………..No.

Okay, I’m done being facetious. In reality, I have a strong disconnect with this campaign for two reasons.

Second, stop calling it “Bible Poverty.” Why? Well, for starters, being biblically impoverished won’t kill you. Being hungry, thirsty, naked, sick, or in prison…those things will kill you. But to broaden the definition of poverty to non-grinding conditions such as a lack of Scripture? Seems to really denigrate what poverty is and dismiss the good Christian AND non-Christian people who are working against poverty in all its forms–often without any mention of Jesus. While we can argue back-and-forth about salvation and hearing of the word (here’s a chart to help frame that conversation), any serious study of Jesus would clearly put caring for this world as above otherworldly soteriological concerns.

In his book Walking with the Poor, Bryant Myers shares his concern when we define poverty as deficit in something:

When we limit our understanding of poverty in this way, we see ourselves as providers. The poor are passive recipients, incomplete human beings whom we make whole. This unwitting attitude has two negative consequences. First, this attitude demeans and devalues the poor. Our view of them, which quickly becomes their view of themselves, is that they are defective and inadequate. Second, our attitude about ourselves can become messianic. We are tempted to believe that we are the deliverers of the poor and that we make their lives complete.

Boom! Precisely my problem with this campaign: we are the messiahs and see the other cultures as passive recipients of the Word.

However, while that critique collides directly with the campaign above, I would be doing a disservice to Myers by stopping the quote there. He goes on to share one of his major tenets:

[However], challenging the poverty-creating nature of power demands the transformational power of the gospel. It is about personal sin and social sin. Only the good news—all of it—contains the hope that the poor will someday be able to build homes and live in them.

I agree that the bible stories give life and can give a narrative to escape ACTUAL poverty. EndBiblePoverty even has a video along those same lines here as they tell the story of the Quechua women. Such a story is a powerful embodiment of what Myers is talking about: the Gospel as the breaker of personal and societal sin.

In this way, biblical poverty is similar to real poverty because it cannot be addressed by giving more or depositing more. It can only be solved by relationships and living alongside people. The translations must be done alongside missions and service that lift people up from actual poverty conditions.

I would go so far as to say that any translation of the Bible that is made without a relationship to the people would be an incomplete translation. It would lack the depth of the native speaker’s tongue and concepts, because it was created in isolation. One cannot speak of the Body of Christ without being alongside the bodies that are hearing the Word.

So that’s my problem with this campaign. While “End Bible Poverty” seems humanizing, while there are pretty pictures and videos, and even some real testimonials of lives being changed, the approach still strikes me as demeaning to the cultures being targeted and messianic by both the framers (“completing the Great Commission”) and the supporters who can pat themselves on the back for a new translation without knowing if the translation is made from a scholar far away or from a well-digger close at hand. Real deadly poverty should be our primary concern and to conflate that term with non-lethal conditions seems really insulting.

For more information about this campaign, Ernest Goodman of Missions Misunderstood did a series on the Seedbed Company (the parent group of the “End Bible Poverty” program) two years ago now. It’s got some more information in a “friendly push” kind of way.

Discuss! Thank you for your comments!