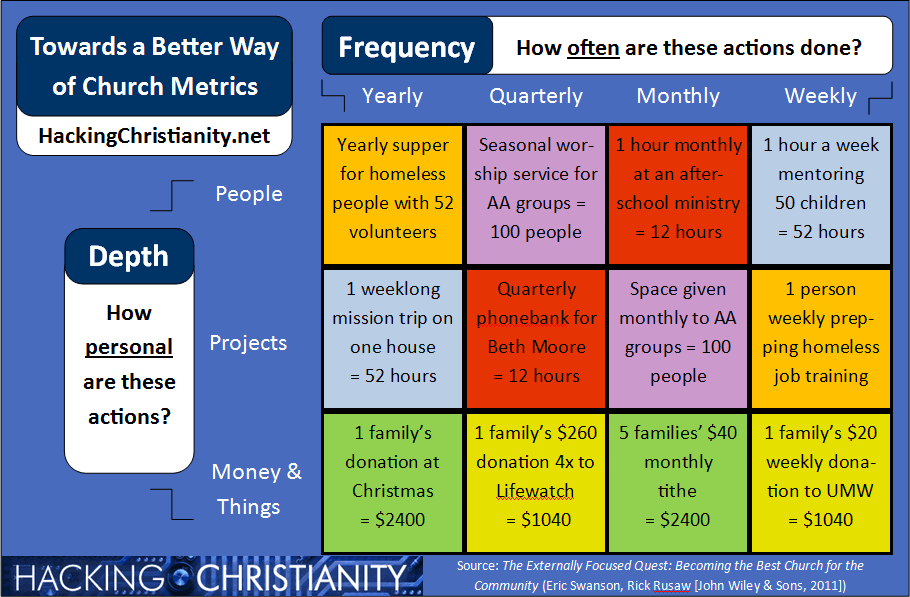 Note: This is a rewritten version of this post from a year ago.

We’ve long been suspicious of church metrics and of the increased reliance on quantitative measurement in the UMC here at HackingChristianity. As the supervisory distance increases due to fewer district superintendents and larger districts, the church leadership is by necessity choosing to emphasize comparative metrics. While helpful for accountability for what they are measuring, are there ways to show the metrics system is flawed so that what the church is measuring doesn’t translate to what the church leadership really values?

I recently found a chart to explain what I mean. A year ago at a district meeting of churches in the Portland area, the clergy were given the following chart to gauge our outreach efforts and to help with planning. I’ve spruced it up and made it more clear, but it’s from The Externally Focused Quest: Becoming the Best Church for the Community by Swanson & Rusaw. You can view the original chart here in Google Books but here’s my version: 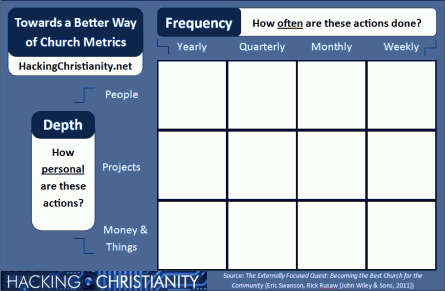 Basically the idea is that you place a dot or something in each square to indicate where your church has a program or person or offering regarding outreach and its frequency. Then you evaluate. Are there a ton of events that happen yearly and raise money (or donate materials ie. “things”)? Are there more programs that happen weekly and have lots of volunteers? You can see how this splits our outreach into categories to see where the needs are.

The authors of the chart outline that there are two movements that make a church more vital over time:

Thus a church that is growing in a heart for missions would have a good balance across the chart, though if it were weighted, more dots in weekly personal outreach is the strongest.

So this is a great chart. But it’s not only great in a utilitarian way for your congregation (feel free to borrow it!), but also to illuminate the problem with church metrics in the United Methodist Church as it stands.

A Tale of Two Churches (Or only “One” to the UMC)

I have an example chart here. What I did is I filled it in with TWO different churches that have filled in the same reporting number (dollars, people, people served) with very different actions. So you would compare the two orange boxes. Or compare the two reds. Check out the chart and we’ll outline it below. 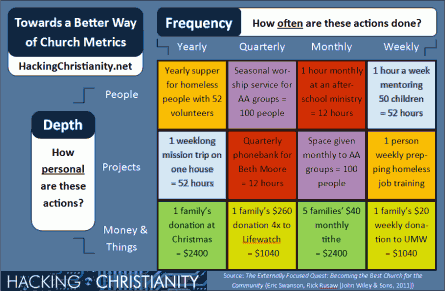 You can see how the activities are different but both involve outreach. But here’s the confounding piece:

BOTH churches would report the exact same number to the church metrics website.

For example, One church could (following the blue boxes) have one individual spending 52 hours once a year on a VIM trip. The other church could mentor one different child one hour a week and spend 52 hours in outreach. They would be quantitatively the same (52 hours reported at the end of the year) but qualitatively different (one served one family’s house, the other served 52 children on a regular basis).

Is one better than the other? Not really. But when you start to add up the two comparisons together, look at what you get: 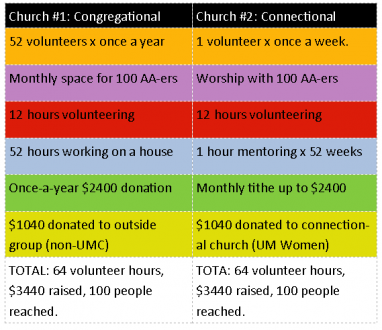 For example, Detroit churches (I picked them solely because theirs was high-up on a google search!) have this page outlining what would and what would not be counted in the vital signs dashboards. I went through and categorized the above based on that page’s outlines. YES, donations to Lifewatch and donations to UMW would be counted in the same category (not kidding!). And look at the two very different churches that would report the same “metrics.”

Quantitatively, they would report identical reports to the United Methodist powers-that-be. But I would dare you to find anyone who would say that church #1 is more vital than church #2. The same numbers generated do not replace the picture of a church more involved on a deeper level and with a budget more spread-out than dependent on a few kingmakers in the congregation.

The Mission of the United Methodist Church is to make disciples of Jesus Christ for the transformation of the world. It seems that the things we should be counting should be about transformation, not accumulation. And the way church metrics are currently set up, we are doing the opposite.

Joey Reed linked to the original article last year and includes this commentary:

Expecting diagnostic metrics to fix things is like treating a fever with a thermometer. As it turns out, there’s more to waking up the churches than simply counting the sheep — something we knew all along, but couldn’t quantify. Indeed, we were barely able to articulate the alternatives to jotting down our numbers and struggling to find their meaning.