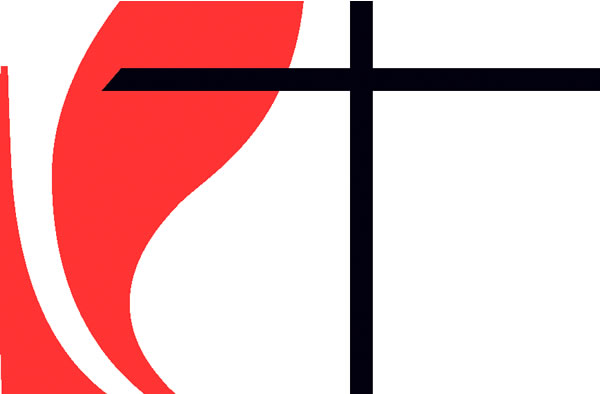 I was tasked at my local church to check out successful church websites and see how our own website could move “onward to perfection.” I was looking at the website for a prominent United Methodist Church and noticed something odd: I didn’t see a Cross and Flame on its front page. Well, that’s not terribly unusual: I rationalized it could be a marketing decision, and my own church website doesn’t currently have it on our rotating banner (Edit: my webmaster informs me it is on our “bookmark” icon so there’s 16×16 pixels of Methodism on every page). However, on further inspection, this church didn’t even have the name “United Methodist” on their website…

I began to wonder if other successful United Methodist churches had the same practice: not advertising their UMC identity, at least online. And why?

The church in question was a big church–in fact, it is one of the top 100 UMCs. Using 2011’s data, these churches average anywhere from 6700 to 1300 people on a Sunday morning. These are the luminaries, staffed by mega pastors (out of the 100….uh, 98 are men). They are often multi-site with many worship styles. They are mostly from the South, but there’s a good amount of Northern churches (only one Western Jurisdiction church, sadly). These are the cream of the crop and the churches that best utilize the United Methodist way of being to attract newcomers to the faith.

If all the above is true, then my question is: are they shunning their Methodist identity online? Why would they intentionally remove their denominational affiliation from their online presence?

Methodist Branding in the Top 100?

So, looking at the Top 100 UMCs and their websites, I set two pieces of criteria:

You would think that would be easy low-hanging fruit. But the numbers were a bit shocking: 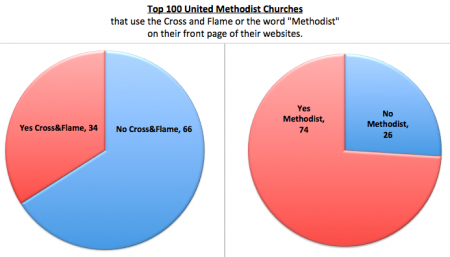 As you can see, out of the top 100 (which means the percentages are the same as the numbers):

If you want evidence, let’s look at  those large membership churches that shun both United Methodist in name and the Cross and Flame (with their rank in the Top 100). I want to pull out two really egregious examples from the list at the outset:

#4: Granger Community Church in Indiana is the largest UMC that does not embrace its Methodist identity online. No Cross and Flame. No mention of it being a United Methodist community (it’s a “community church” apparently). In fact, if you search for “Methodist” on their really impressive and informative website, here’s what comes up: 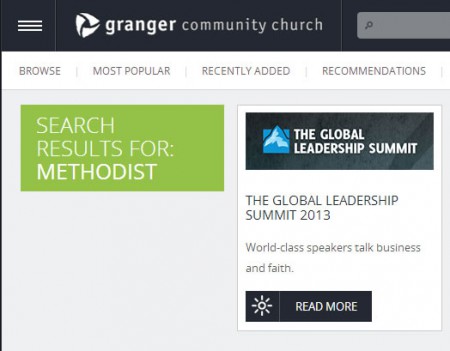 That’s it. No about page, no history, no identification of the clergy as Methodist.

As well, #69 Christ Church in the Holston Conference has no mention of UMC, no Cross and Flame on their website, and they refer to themselves as “Christ Church” not “Christ United Methodist.” In fact they recently edited their “New to Christ Church” page to remove any UMC references. Here’s the before and after of the same page:

In all, 21 of the top 100 United Methodist Churches do not use Methodist branding for their websites.

The following churches have UMC in small mentions (their URL or in their “about” pages) but otherwise resist any UMC branding:

Even more disturbing is that the following churches do not have any UMC branding or significant mentions on their websites at all:

Your Turn: Marketing or Theology?

I wonder about the reasons for this lack of Methodist branding.

It certainly can’t be because of legal regulations of the Cross and Flame because local churches have full use of it. The legalities are there primarily to restrict caucus groups and individual clergy from speaking as if they represent the church. For example, this blogger was one of the ones who filed official complaints with the GCFA when Rev. Maxie Dunnam included the Cross and Flame in his video diatribes against the Constitutional Amendments in 2009–as if he was speaking for the church. The videos were then remade without the offending logo. *success*

It could be marketing. Click through the linked websites above and you’ll see the fancy header graphics and some nice logos for their churches that they decided the UMC images didn’t fit into. To compete in a world increasingly hostile to organized religion, perhaps eschewing official involvement (at least online) is helpful to their local evangelism. And let’s face it: just saying “a cross and a flame” evokes more images of 1960s KKK rallies than hearts strangely warmed in Methodist pews. Maybe it is okay that the denominational image is falling out of style and we need new branding in 2016.

It could be theology. Are these churches out-of-sync with the greater denomination? On one hand, some see themselves as staunchly Methodist. At least two of the pastors of the churches mentioned above are so-called champions of United Methodist values as signatories to the FaithfulUMC petition–and yet they don’t champion United Methodism in their branding on their own local church. On the other hand, at least two United Methodist churches in my town have recently removed United Methodist branding from their Facebook pages. The pastor explained to me that it was intentional because the UMC’s stance on homosexuality was a turn-off for visitors and they needed to know that the Reconciling churches were not like the rest of Methodism.

As you know, this blog celebrates our connectional nature. While I’m certain that in person the Methodist presence oozes out, online is my realm of interest and it seems these churches have abdicated a Methodist identity that could do a great deal to remind the world that we aren’t all about debates about homosexuality and being the church of Bush and Clinton.

If these are our Top 100 churches, why aren’t they choosing to be more Methodist online?

So what are your thoughts? Why would churches not reflect United Methodist branding and identity online? And is that okay that our denominational staples of the Cross and Flame–and even the name “United Methodist–are not getting the traction they used to have?

Discuss. Thanks for your comments.

UPDATE: Followup to this post here where we discuss why UMs would want to disaffiliate themselves from the mothership.