You are here: Home / Church Talk / The Creed is Freeing? [worship.hack] 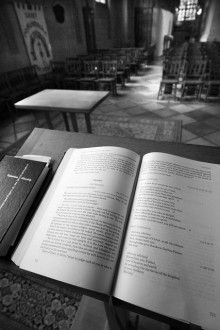 Earlier this week, I had the pleasure of hanging out with a church planter who does lots of missional church behind-the-scenes work: getting to know the community, the people, the needs, and the aspirations…and allowing those factors to dictate what the church looks like.

And what she told me shocked me.

She told me of a conversation with the pastor of an evangelical church plant in Portland–the heart of the None Zone and one of the cities with the lowest rates of Christian attendance–who said that his congregation recites the Apostle’s Creed every Sunday.

That’s a mainline church thing. That’s a stuffy Frozen Chosen thing to do. Saying the Creed, being high liturgy. Why would they do it?

The pastor replied that “Saying the Creed is freeing.”

What? Freeing? Excuse me, Mister Pastor Person, you realize that the Creed is Creedal, as in you are giving you assent to the beliefs in the Creed. How is that freeing?

He said that for his congregation, most are post-evangelical: people who have left evangelical traditions with their intricate moral codes and expectations for one reason or another.

So when his church says the Creed, they are saying “This is IT. This is ALL there is. Outside of the 10 Commandments and the Great Commandment, this is all you have to believe.”

And in its simplicity–especially for post-evangelicals who are used to rigorous expectations and serpentine moral structures such as at Mars Hill—the Creed can be freeing indeed.