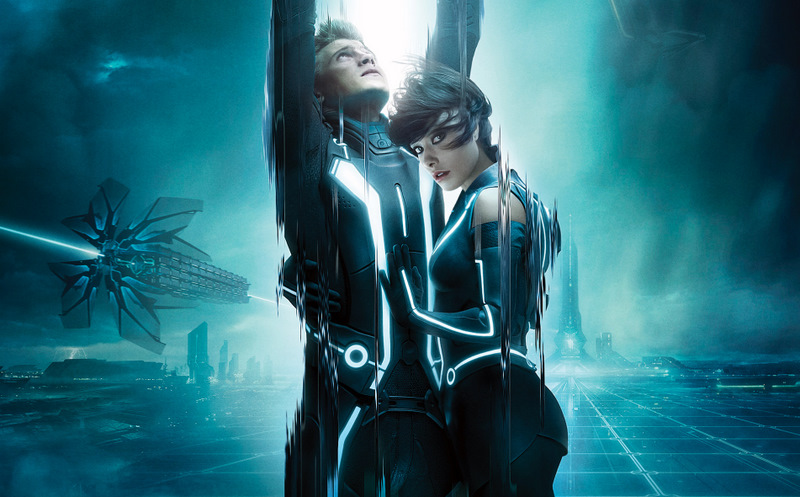 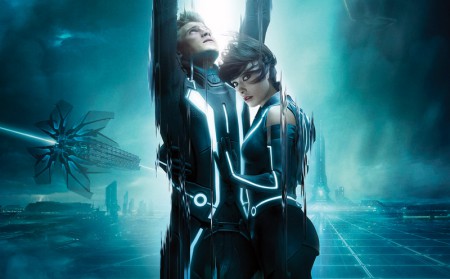 In the 2010 movie Tron Legacy, the sequel to the 80s movie Tron, there is a digital world where computer programs are anthropomorphized and walk around like humans. The programmer’s son comes back to the digital world to save his father who has been essentially trapped by the evil program CLU. They are called “Users.” Users are humans who have basically been scanned and remade into the digital world. They are not programs but as humans they have more freedom to respond beyond what they are “programmed” to do.

When they are stuck by CLU’s evil plan and it seems the odds are against him, the son Sam goes a separate way without a clear plan and the father Kevin calls him on his classic Indy ploy:

In this scene, there’s an element of free will versus determinism, of human being able to freely choose their path versus having it pre-determined for them. For a world full of Programs who can only act within the constraints of their programmers, Users are powerful indeed. But there’s also a commentary of what role we play in creating the world we want to participate in. We can either participate as people who know they have limitless potential to change their environment or programs that have limited abilities.

The truth is that each of us can choose which to be. “Tron” is the name of a good program that has been re-programmed by the evil CLU. He was completely changed by CLU but at the end of the movie, Tron overcomes his programming and turns on CLU to allow Kevin and Sam to escape. “I fight for the users” is Tron’s original program and he eventually shatters his constraints put on him by CLU. Even for Programs, they can overcome bad programming.

I think this is more explicit n the French translation of Tron Legacy, because the line is different:

In the French version, they translated this line to something with this meaning “I’m a designer, I’ll improvise” which I find much more eloquent and powerful, than just “I’m a user” because it suggests the ability to create. In comparison, the English version seems a little weak, but it’s still ok. My brother suggested they put “I’m a mac user” to make more impact :p, I suggested “I’m a beta tester”, “I’m an early adopter”, “I’ll improvise!”. We should ask users to improvise now. Here is the code. Improvise!

I think in a theological sense, the French version gets more at the core of this scene. A designer takes what has already been made available and turns the basic elements of a computer program, architecture plan, or educational curriculum. But more often than that, a designer adapts other designs to make something appropriate to the task before him/her. They essentially co-design an approach to whatever situation is in front of them, usually taking the original designs beyond what they originally thought.

We often think we are Programs, stuck in whatever rut we are forced into, limited in our potential, assuming that even though there is an afterlife that “this is all there is” and “this is our lot” and we take it in a realistic fashion. But if we recognize that we are Users–Designers–then our role is not passive acceptance (or the opposite: control) but it is participation and a seeking to change not only our lives but the lives of those around us.

Therefore, we are co-creators with God, taking stewardship over what God has created for us and creating it into something new. Our arc of human history isn’t because God dumped grace and chances into our laps, or even that God wound a limitlessly complex clock that we react to. Instead, human history is a story of novelty and creativity, seeking to co-create human society that walks hand-in-hand with God who meets us where we are.

In scripture, 1 Corinthians 3:9 states that we are “Fellow workers with God.” This is not works-righteousness, it is the recognition of our role–our responsibility, our stewardship charge–to bring forth the Kingdom of God on earth as it is in Heaven. That our role is not to be passive recipients of God’s grace and judgment, but to actively engage that grace and judgment, to actively give that grace to others and to remove their judgment of themselves–judgment is left to God. To remind a world full of Users that they are not Programs but can rise above what their culture around them, their families, and their own thoughts about themselves limit them to. We are Co-creators with God, indeed.

My hope is that, as computer consultant John D. Cook writes about the tension between programmers and scientists, that we do not assume “the Code has already been written” and that, like the dark side of the Purpose Driven Life, that our lives are pre-determined. Instead:

Choose to be a Co-Creator today and know the Code has not already been written.