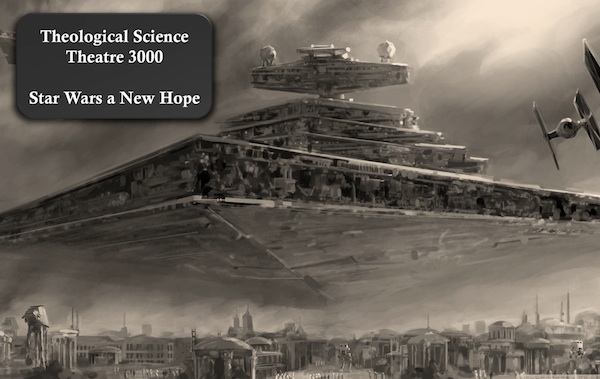 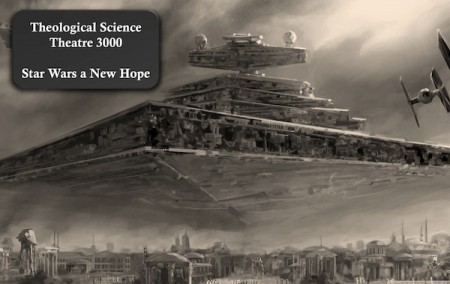 A new occasional series will take place on this blog at the intersection of Science Fiction and Theology, which will be a sharable form of classes that I’ve developed at my local church.

In January 2013 I began a monthly group that would watch or reflect on a Science Fiction film/tv series using biblical and theological material. The name of the group came after a massively popular online Facebook call for contenders as to the name of the class, which included such entries as:

Ultimately, my friend Kelly D. came up with “Theological Science Theatre 3000” (a riff off of the cult series MST3K) and that name stuck. Thanks Kelly 🙂

The first class participants filled out cards with their favorite scifi series on them. Since I didn’t have this preference data before the first class, I decided to stick with a movie that everyone could relate to: Star Wars, a New Hope (1977). Shocking choice, I know.

The class had three sections: Why watch movies? Why watch scifi? And then a Scifi run-through of the movie/tv series of the day with biblical/theological discussion.

Attached are the Powerpoint and the PDF of the Powerpoint for this first class. The PPT includes my presentation notes which has some insight into the lessons of the class and where I wanted to go with it.

If you want to use it in your church or pub church, feel free to do so (you do not need to ask permission), but please offer citing material such as:

The resource for the first class was “Star Wars Jesus: A Spiritual Commentary on the Reality of the Force.” I used Grimes’ book as a helpful delineation of some scenes, but the commentary and questions are my own.