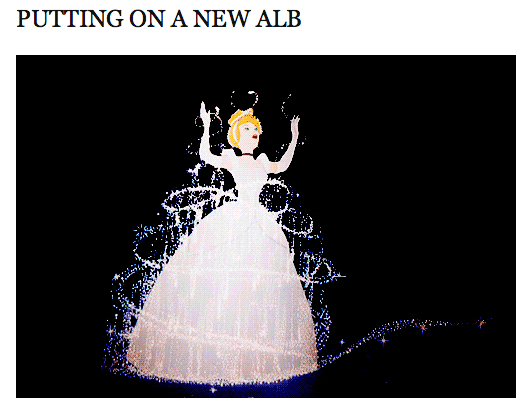 One of my daily tumblr visits nowadays is to Ev’ry Day I’m Pastorin‘, a blog that uses animated GIFs to depict situations that clergy and religious professionals find themselves in. Often hilarious. The tagline is “very real, hopefully (largely) anonymous visual reflections on life as a clergyperson.”

I was able to score an interview with EIP and the author gave some really insightful responses. Here’s the full interview. Enjoy.

What was your inspiration to begin EIP? And why choose the specific medium of animated GIFs?

The medium itself was simply following in the footsteps of other great Tumblrs like “What Should We Call Me” and “The Time I Studied Abroad.” Gifs seemed to me like memes on steroids — a great visual way of putting emotion into motion. And yes, planning worship with parishioners is sometimes a lot like jumping on an exercise ball on a running treadmill.

The inspiration — well, let’s keep the mystery and simply say that it involved two United Methodists, a Presbyterian, (Wesley and Calvin would be so proud, I’m sure), some Episcopalian and UCC voices, and a very small dog with the name of a Canaanite goddess.

That’s the way all church nerd blogs are started, right?

There also may have been some amount of wine involved.

How do you choose the posts? Which denomination seems to send in the most submissions?

Most of the posts are still mine, but I do get a good number of submissions. They don’t always state their denomination, but it seems like I get an awful lot of Episcopalian submissions, which I love. I’ve gotten notes and submissions from places like England and Iceland, too, which is crazy to me — that what started as a way to express my frustrations, share my experiences, and entertain my seminary friends went that viral.

As for which submissions get posted, my general rule is that if you make me laugh, it goes up.

I also get a lot of submissions from friends who know who I am. Some of the funniest and most viral posts have come from the crackpots that I call seminary friends.

I have tried to maintain a very mainline, ecumenical air to the blog. I love that progressive Episcopalians, UCCers, United Methodists, Lutherans, Presbyterians, and other Christian mainliners can all find a place to play on my blog. I also haven’t been out of seminary that long, so it’s fairly easy for the blog to speak to that crazy and wonderful area of the church as well.

I’m also in it for the kid in Iowa or Mississippi who is starting to become convinced that being a Christian means being really conservative, and that, since s/he’s liberal and/or queer, s/he has to leave the church. For some people, being a Christian means adhering strictly to conservative values. Not for all of us. I want people to know that — that they can disagree with conservative evangelicals and still have a church home, and that the church is more diverse than they can imagine. There are liberal Christians out there. You just have to find them.

All of the above.

We deal with a lot of crazy: crazy parishioners, crazy denominational leadership, and even our own crazy minds. Trying to hold onto liturgy in Pentecostal/Evangelical Land has also provided me with more that enough inspiration to fuel a blog. For me, frustration breeds humor. It’s just how I deal with things. Thank goodness I’m not alone in that.

So it’s mostly catharsis. It’s a way of making fun of ourselves, sharing experiences, and occasionally expressing how much we genuinely love our jobs and our people. It’s also a way of reaching out and finding community in common experiences. If you’re a small church pastor in a Midwestern or deep Southern state, and you’re the only one around who doesn’t think that President Obama is the antichrist or that queer people are terrible, it can get lonely. This is my way of reaching out and remembering that I’m not alone, and hopefully reminding others that they aren’t, either.

So when Miss Gladys can’t find her keys when you really just want to go home, or when your pastoral duties include cleaning up where someone got sick in the bathroom (there’s nothing like scrubbing toilets in your clerical collar), or when you think that if you’ll lose your mind if you get one more e-mail from a parishioner about Obama’s conspiracy to make everyone Muslim, you can remember: you’re not alone, and you’re only a little crazy for staying there. A lot of us have these experiences.

Do you have a “top 5” of posts that were really viral or just hilarious?

This is like choosing between my children… except that I wouldn’t delete my children if they weren’t funny. Here are six. Pastors can’t count. At least this one can’t, and is stubborn to boot.

Your tagline says that you want to be anonymous, and indeed most forms of online religious humor (Unvirtuous Abbey, Memes pages, @FakeUMCDS) keep anonymity. Why do you think that is? What ways is this medium a form of protest?

Anonymity provides an immense amount of freedom. There are so few ways to criticize leadership or the church when you’re young and new to ministry, especially if you’re progressive in a conservative place, without it being a career-inhibiting or even a career-ending move.

This blog allows me (and others who submit anonymously) to have a voice, and to express our discontent with the way things are at a minimal risk to our jobs. We want to keep our jobs because we love the church and its people, and we want a chance to gently move our people to a different place without being outed as “liberals” and therefore labeled as someone who is to be shut out. It’s a way of working within the system that is bound to be frustrating to some, but if all progressive pastors moved to progressive places, I think that the church would be even more fractured than it is today.

But all of our anger at the injustices and prejudices in these places has to go somewhere. In my case, it gets put into gifs that occasionally make fellow pastors spit coffee on their monitors. And that, sisters and brothers, is a blessing.

Thanks to Ev’ry Day I’m Pastorin‘ for the interview. Follow the author on Tumblr and thanks for reading!