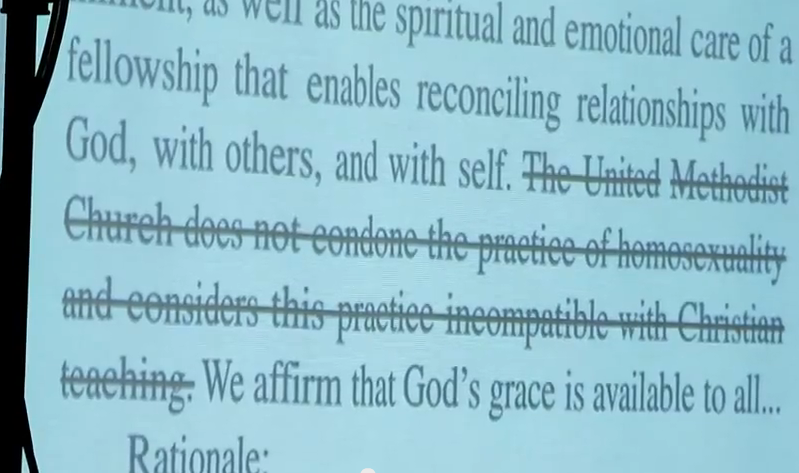 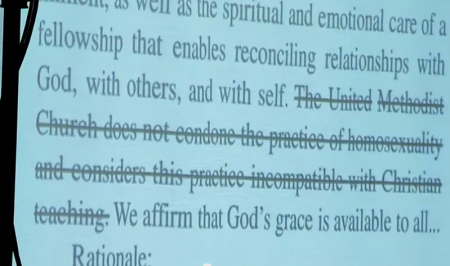 “A Church Divided” is a professional and well-made PBS video made by San Francisco’s KQED and their Division for Investigative Reporting. From their website:

Is homosexuality compatible with Christianity? This question is debated fiercely in A Church Divided, a television documentary narrated by Peter Coyote and hosted by Scott Shafer. It follows California delegates to the United Methodist Church’s global convention in Tampa, Florida. There, United Methodists from around the world gather to vote on the future of their church and its official policy on gays and lesbians.

Progressive Methodists want to amend church doctrine declaring homosexuality incompatible with Christian teaching, but conservative Methodists want to retain the church’s traditional stance. Other mainline Protestant churches, including the Presbyterians and Episcopalians, split over this divisive question. The question now is will it divide the Methodist Church as well?

This was primarily a look at SF local clergyperson Rev. Dr. Karen Oliveto, senior pastor of Glide Memorial UMC in San Francisco (wikipedia), which is a rare megachurch of 12,000 members that is also hugely progressive.

Embedding is disabled so you have to watch the video here.

Here’s the timeline of scenes:

General Conference 2012 was my third General Conference to attend and work in an advocacy role, so it was evocative to walk through it again (I was working in General Administration on the PlanUMC conversation, so I wasn’t in the room for these LGBT discussions as they happened). But I saw lots of my friends on the tape–some of whom I only see in real life every two years–and some scenes made my heart ache.

Thoughts? Reflections? What does the video mean to you? Do you feel the same about the UMC after watching it or different?