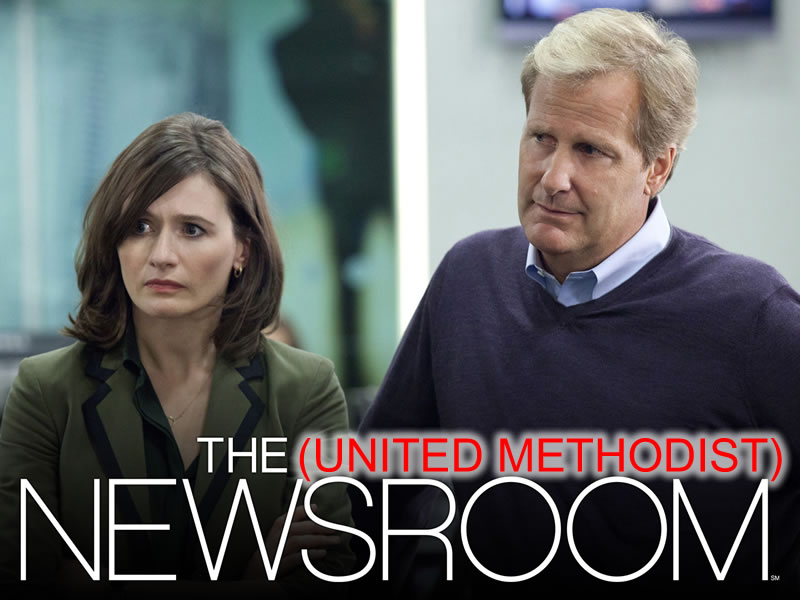 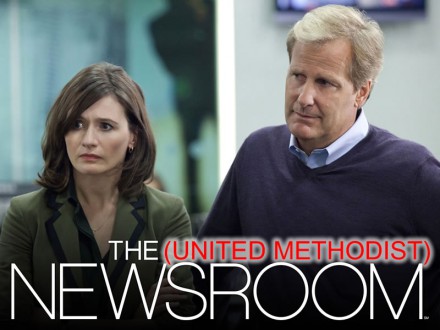 We got a few months of free HBO a while back so we got to watch “The Newsroom” for free. Even though it is hard to see Jeff Daniels (who plays anchorman Will McAvoy) and not envision him on the toilet in Dumb and Dumber, it’s a great show. The show is a character drama about a fictional newsroom struggling to keep its journalistic integrity while combating the sensationalism inclination of other studios. Fascinating.

For the first seven episodes, they resisted the temptation towards sensationalism. But on the eighth, something interesting happens. They were talking about the network suffering a massive ratings drop because they refused to cover the Casey Anthony story. I kept on wanting to replace “network” or “show” with “The UMC” and “audience” with “membership.” Statements like the head executive Charlie saying  “Half our audience changed the channel in one week” would easily reflect the conversations over the Death Tsunami.

So I began to perk up and see what parallels our church might have with this television show. Read on for the dilemmas and how they inform the church’s direction as well.

Against the Executive Producer Mackenzie’s contentions, Will (the anchorman) and Charlie (the executive) both decide to play the ratings game and cover the Casey Anthony trial. Why give in? So their network can move up high enough in the ratings to be considered to host a Republican Debate (this is set in 2011 when Republicans were contending for the nomination that Romney eventually got). Here’s how the exchange went:

Will “We can cover [the Casey Anthony Trial]. It’s news.”
Mac “Say that three times and click your heels. It’s entertainment. And it’s just this side of a snuff film. We’ve had ratings dips before.”
Charlie “Not like this.”
Will “I want the [Republican] debate. I want to fundamentally change the way we interview presidential candidates for the job. If that means we have to be Jerry Springer for a few weeks, I’m willing to pay that price.”

To Will, he was willing to sacrifice some principles for his network because he wanted to change the entire process of debates and interviews of presidential contenders. He was willing to put his name and show onto something that he didn’t believe in in order to achieve a higher goal. The ends justify the means. He cites Edward R. Murrow’s interview of McCarthy in this exchange:

Will “Murrow did person to person interviews as a deal. He gave one so he got one. He interviewed Liberace so he could go after McCarthy.”
Mac “Those were puff pieces, this is poison. If we are going to do this, lets not pretend we’re not doing this.”

To Mac in that exchange, she isn’t willing to sacrifice who their network fundamentally is (to her eyes) on the shallow altar of a goal. The goal is worthy and Mac undoubtedly wants to change the system the same way Will does. But she recognizes that if they go down that path, forever will it dominate their destiny. Forever will it push them towards sensationalism and becoming another cog in the news-entertainment complex. The ends do not justify the means.

But Mac is overruled and the network covers the Casey Anthony story so they can host the Republican Debate. We see in Episode 9 if they got it (I won’t spoil it).

The dilemma above is about selling out principles for short-term gain (or even long-term gain) in order to do something unique and special. It’s a utilitarian perspective: Do what works in order to do what is best. The ends justify the means.

I got a newsletter from a church in my home state. It has six Sunday morning education opportunities for adults. They were studying Beth Moore, Ray Vander Laan, Francis Chan, Edwin Cole, Joyce Meyer, and Kay Arthur. Zero United Methodist curriculum or authors or even perspectives. How can a church get a distinctive Methodist identity if its Sunday morning education is filled with interdenominational (or flat-out Baptist) perspectives?

I’ve often wondered why Methodist churches do some very un-Methodist things. Such as:

Why would churches choose to do these things that (to seminary-educated clergy) are clearly not in the Methodist vein?

I believe there is a tremendous pressure on mainline Methodist churches to accomplish the things that are special/unique/expressive of our denomination. To do the work of disaster relief through UMCOR and assembling relief kits or financial donations. To offer a balanced theological perspective in a Wesleyan tradition. To stick a finger in the overflowing dam of dangerous theology like Neo-Calvinism and Prosperity Gospel. To maintain institutions of education, medical, and research initiatives. To (sometimes) offer a safe place for youth that are ran out of other churches because they are gay.

I cannot help but wonder if there are pastors who put up with the list above to do the paragraph above. Who put up with what they know is an un-Methodist and un-helpful theology in their pews and classrooms so that they can accomplish the distinctive aspects of United Methodism.

And church metrics encourage it. When any area is evaluated by higher-ups solely on “numbers” then we end up with technocrats who make decisions based on the “ends” rather those who seek a wholly authentic church experience from pulpit to pew to classroom to outreach.

And the itinerancy system encourages it. When laity claim that “it’s been done in the past” sometimes it is harder for clergy to resist allowing certain studies, events, or teachers into the fold. Then since it was allowed once, then it is allowed again, or lies low until the next clergyperson change.

So the Methodist dilemma is really every denominational church’s dilemma: to accomplish yourparticular faith traditions goals, sometimes you choose to entertain non-denominational activities that boost attendance.

And sometimes it isn’t about non-Methodist things, but about accommodating the empire-building aspects of the church to accomplish the missional good.

I’ll close this section with an anecdote. A clergy friend of mine served a large church that was in a capital campaign to expand into a new sanctuary. She went with the church on a VIM (Volunteers In Mission) trip to be in mission overseas. She witnessed abject poverty and horrible living conditions and the sheer joy they had over just having a bible and clean water. She then returned and was nauseated over the materialism of her local church and the millions of dollars being pumped into a new sanctuary that could save real lives overseas. After some soul-searching, she justified it by believing that it would bring in more people and more dollars and more opportunities could be had to send more VIM trips overseas.

At least five years later, as I recall, that church has grown steadily…but still does only one VIM mission trip a year.

In the Newsroom episode, because Casey Anthony gets half the show’s coverage, all the other stories get cut or shortened. This gets under Sloan’s (the financial analyst) skin as she is trying to talk about the fiscal crisis with the debt ceiling. There’s a terrific passionate scene where Sloane tells Mac why it is so imperative that they cover the actual news.

Sloane “We should have been featuring it weeks ago. To give time for people to call their congressmen, to jam the phone lines as fiscal conservatives and tell them to put the pin back in the fiscal grenade.”

I worry that even as we make these deals and do non-Methodisty things so that we can accomplish really Methodisty things, Are we ignoring that we are giving people spiritual fluff? Are we not equipping people for the postmodern world?

Or worse, are we not giving enough time to real life-giving theology, steeped in the Wesleyan (or whatever denomination) tradition that offers real living lenses to make sense of the world? Are we giving too much time to Calvinism that dis-empowers people, particularly women? Are we not giving enough tools to combat the Prosperity Gospel and its predatory theology over those less informed and unlucky?

Are we like Sloane and want to give enough time and effort and bandwidth of our worship, study, and outreach to lift up truly life-giving theology…but keep getting lost by the flash wizardry of those more charismatic but less substantive? How do we navigate it?

My hope is that every clergy and every laity realizes that they are making a choice. They are choosing to satisfy the crowd. While I lean towards populism in many aspects of my life, sometimes the crowd doesn’t know what they really need. And the church universal and local would be reinvigorated if they spent more time on what truly satisfies rather than these half-hearted theologies that sound good but leave ash in your mouth.