On the Internet, there are browser tools that help make for a more enjoyable, utilitarian, or streamlined browsing experience. One such new tool (that Derek White “Geek Preacher” clued me into) is called the Facebook Demetricator. The browser tool removes all numbers from your Facebook account. Per the graphic above (mobile users will need to view the full site), it replaces “33 people like this post” with “people like this post” or “12 comments” with “people commented” or “15 minutes ago” with “recently.” Here’s a demonstration video. It removes all metrics from your Facebook, essentially.

Theorist/artist Ben Grosser has clued into that Facebook puts all these metrics on our pages for a purpose: to encourage our increased interactions on Facebook. The more times we login and view, the more eyes are on the ads, and the more money Facebook makes. From an interview with Grosser:

I would suggest that the primary question asked by Facebook’s designers when deciding which metrics to reveal is whether a particular count will increase or decrease user participation. Am I more likely to click on a ‘trending article’ if I only see its title or if that title is accompanied by a message indicating that 131,394 other people read it before me? If the latter then the metric is revealed. 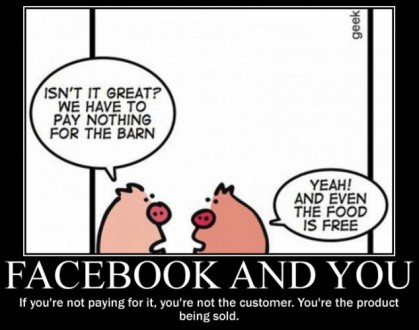 Hence, Grosser decided to make a social experiment and remove these metrics, with a deeper purpose than most online utilities. From his website:

Would we add as many friends if we weren’t constantly presented with a running total and told that adding another is “+1″? Would we like as many ads if we weren’t first told how many others had liked them before us? Would we write as many status messages if Facebook didn’t reduce its responses (and their authors) to an aggregate value? In other words, the site’s relentless focus on quantity leads us to continually measure the value of our social connections within metric terms, and this metricated viewpoint may have consequences on how we act within the system.

When the express value of a website is quantity, and they reflect that quantity to encourage a higher quantity of paricipation, then there’s a de-valuing of social connections.

Let’s apply this to the church…but one last line from the interview with Grosser:

What purpose does this enumeration serve for a system (and a corporation) that depends on its user’s continued free labor to produce the information that fills its databases? Where does it lead when quantity, not quality is foremost?

The Role of Metrics in the Church

Imagine you are at a Church Conference and every participant wore a badge proclaiming how many friends they had in that room? Would anyone be content to keep that number at zero? At one, two, or three? Or would they be driven to walk around the space, meeting new people and identifying old acquaintances all so they can increase their public friend count?

That is more reality than imagination at this point in the United Methodist Church. Visit any annual conference and you will see dashboards like Bishop Willimon began that measure money in the plates, butts in the pews, people involved in mission, and professions of faith. If you increase in these quantities, your church is safe from the wrath of the powers-that-be, you sustain yourself another year, and your mission shares (apportionments) go up. Also, you can jump into a different (tier) of churches, meaning higher-quantity-increasing clergy will be available to be sent your way. Quantity increases are matched with quantity increases as the church system reinforces itself.

In other words, a focus on quantity over quality DOES grow the church. It will lead to more people. But their social fabric will be more frayed.

I remember back in 2007 a report surfaced (and was quickly taken offline–but not before I got a copy of it), that was a study of fast growing mega-churches. The research concluded that “the fastest growing churches depend on the least involved,least motivated, and least engaged Christian believers.” The study examined 2,000 American churches of 1,000 members or more – including 28 United Methodist congregations – interviewing dozens of recent members in each. Of the 76,000+ participants, 11% become deeply and actively involved in the life of the church. Approximately 55% (over 42,000 people!) drift away into inactivity within 18 months. The quantity system emerges with a good number of dedicated disciples, but that achievement is dwarfed by those that drink the “Red Bull” version of Christianity and have a high for a few months or years, and then are “let down” and leave.

This quantity system then spills into the way clergy interact with each other. One of my clergy friends at Annual Conference thumbs through his Journal whenever someone is speaking on a topic to the speaker’s church metrics…just to see if they are quantitatively important. Amazing, right?

All in all, I am fearful of what might happen when we allow this obsession over quantity (driven by fears over institutional decline) dictate what our relationships are to one another. Quantity is needed, yes. But to allow it to be the driving concern over all we do as the church, then we turn into Facebook where we do free-or-reduced work for the kingdom with our production capacity (dollars, butts, professions) being what is of value. And that’s not incarnational to me.

So what do we do? Quality over Quantity

The Great Commission (found in Matthew) states that the followers of Christ are called to “make disciples of all the nations.” At certain points in Christian history, we focused on the “all the nations” portion and believed that numerical increase was the way to live out this Commission. But increasingly the practice of ministry has me convinced that the first part “make disciples” is the more operative term in the Commission. Jesus didn’t say “make Christians of all the nations” or “make believers of all the nations” He said “make DISCIPLES” meaning people that don’t just profess Christ but deepen the quality of their relationship with God and God’s creation. Clergy, then, are not to be in the sales department, but quality assurance.

I believe that, oddly enough, if we focus on quality over quantity, we will end up getting both:

It isn’t going to be pretty. But it is becoming truer across United Methodism:

My friend Anthony Tang wrote during General Conference that while the Southern jurisdictions have more membership in their churches, that doesn’t mean that they are more involved. In fact, dividing membership by worship attendance, the Western Jurisdiction roundly outdoes the other jurisdictions, meaning we have a higher percentage of our congregations actually engaged rather than mere names on paper. And yet the people who preside over cultural Christianity rather than more actively-discipled Christianity are the ones who want more seats at the Table according to the defeated PlanUMC and the Call To Action.

It is up to our leadership and those who restructure the church (and the bishops who institute dashboards and metrics without Conference approval or vote) to choose whether they want quantity or quality.

They are not a dichotomy, you can have both, but when your system only measures one, then that’s a clear choice as to which church you want.

Your turn: Thoughts? Welcome to our visitors and please leave a comment below!