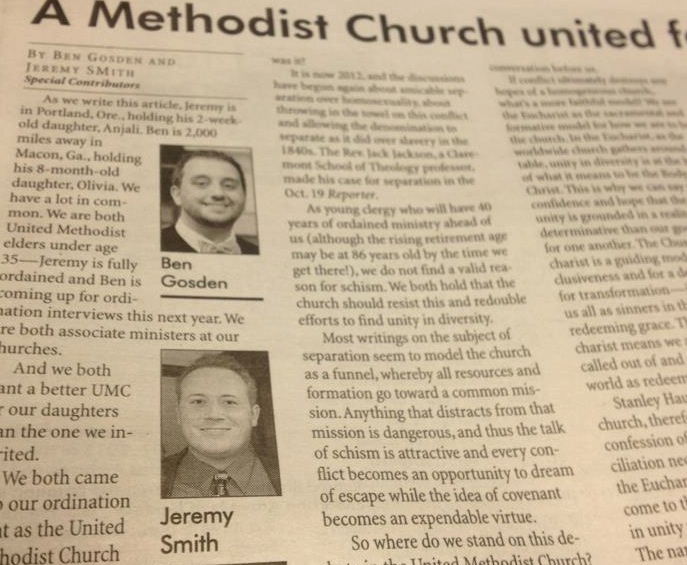 In the November 2nd edition of the United Methodist Reporter (a national publication of the United Methodist Church with editorial independence) published an article “A Methodist Church United for our Daughters” by fellow Methoblogger Ben Gosden and myself. In it, Ben and I respond to Jack Jackson’s assertion that the UMC has only schism as the best option ahead of it regarding the LGBT debate. We disagreed completely with that assertion.

Here’s the article, take a moment and read it.

Over the weekend as friends read the article, it became apparent that the article ticked off people from both camps. Not only Traditionalists who believe that schism will solve the “gay problem” but also Progressives who point to the repeated evidence of ecclesial discrimination being increasingly numerically invulnerable (and thus difficult to remain in a denomination that practices this discrimination). Impressive to say the least!

From this point, I’m speaking for myself, not on Ben’s behalf. Just so we are clear.

Criticism one: Schism will end the ecclesial discrimination against LGBT ministers and allow them to serve openly. I write clearly with heteronormative privilege in that I am straight and serving as clergy. On the same day as this article came out, an article ran in Chicago about a Garrett-Evangelical seminarian who is openly gay and leaving the UMC because he can’t serve openly. So I understand completely this criticism that continuing on in this way is discriminatory against our LGBT ministers and no amount of idealistic hope will change that. I’m with you. But I also stand by exactly what we wrote in the article:

It seems progressives who want to split forget that the church they leave will continue to have gay children. And it seems traditionalists who want separation naively think separation will finally rid the church of the homosexual debate, as though gay persons will no longer inhabit our spaces of worship, formation and service.

Heterosexual couples have gay children; thus, schism does not solve the problem but perpetuates the cycle of violence against LGBT people. While I have privilege as a straight clergyperson, I’ve lost TOO MANY friends to other denominations who were unable to serve in the UMC. I have my scars. I’ve lost friends. I’ve begged for them to reconsider. I’ve theologically rationalized things. I’ve listened late into the night and agreed with their decisions (not that they needed my agreement).

In short, the reality of the ecclesial brain drain of the past 40 years doesn’t nullify my hope to end the exodus in non-schismatic ways. Indeed, the presence of dissonant voices in our denomination is the only hope it has.

Criticism two: Idealism and a “better theological model” will not solve our problems, only practical measures will. I agree completely. Unfortunately, due to our editing constraints, I reduced my practical measure to exactly one sentence:

We may worship in diverse ways across our connection, and there may come a point where our polity is diverse as well (as it currently is in our worldwide church), and such diversity is not disconcerting in a Church with the Eucharist as its guide.

In that, I support the movements by the Western Jurisdiction to try different ecclesial standards that do not affect the ecclesial models of other jurisdictions. The truth is that this is already the case in the global UMC: the non-US conferences can change their books of discipline to match their contexts. That the Western Jurisdiction is doing this without Disciplinary permission will be worked out after three years of practice (or whenever the Judicial Council sounds off).

The practical truth is that recommending a diversity of polity that already exists in the global UMC solves an inequality problem in the USA region of the church and offers a non-schism approach to the LGBT issue (which would be our primary hope).

Criticism three: Gridlock is not a theological value or an answer to the world’s problems. For some, the chasm between both sides of the LGBT debate is insurmountable. Unlike our issues with black clergy and women clergy, the LGBT debate is more like our problems with slavery, which practically required us to sever ties for a time. Neither side often want to talk to each other, and when one side is in the clear majority, the debate is over at the annual conference level. People are tired. Why would we want to keep discussing this?

Because, and again pointing to the article, I believe that we are reflecting our culture now and have an opportunity to do something bigger:

In a world of polarizing politics, widening chasms between the “haves” and “have-nots,” demonization of the “other side,” what better means of grace could the Church offer than how to hold together unity in diversity, to welcome the varieties of the United Methodist experience around the Communion Table?

As I’ve written before, we have an opportunity to model for the world how differences can make us stronger, and a decentralized polity can empower local missions work. I’m now serving in the Western Jurisdiction and every month I’m made aware of someone else who has left my local church because of the UMC’s doctrinal stance on the LGBT issue, regardless of our Reconciling status as a local church. Our uniform polity makes missional variance extremely difficult, and extremely difficult to find clergy who can speak to these varied contexts. Do some churches function best under a Traditionalist? A Progressive? An open LGBT person? A closet Baptist? Yes and yes yes yes. Our church is that varied.

It will take a diverse polity and willingness to practice humility to try something new, and that could be our lasting witness to a world satisfied to tear itself apart into ghettoized camps–and for my daughter’s generation, I don’t wish that.

In short, what Ben and I hope for in the article is that:

Welcome to our visitors and thanks for reading!