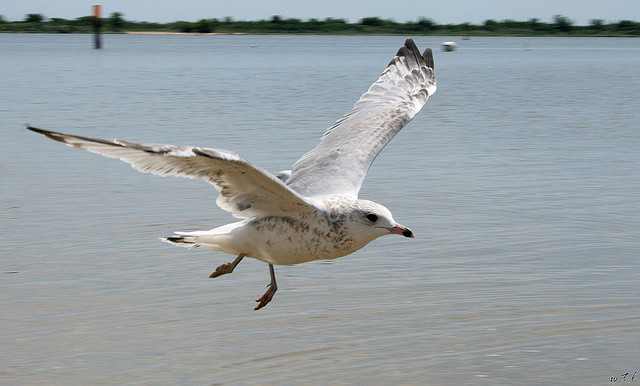 This is a two-part series of responses to some high-level letters regarding our future in the United Methodist Church as a diverse body.

My first interaction with United Methodist Bishop Coyner of Indiana was General Conference 2012, a few days before he would preside over the session of GC that dealt with homosexuality. I had to leave early and was not present during the discussion and ensuing protest. Bishop Coyner presided over that debate, and then when the protest ensued, he infamously closed the conference floor to visitors (who outnumbered the delegates 2:1). This was voided by the following presiding Bishop Scott Jones (Great Plains), but it struck with me: how could a Bishop throw out all of the visitors because of the actions of a few?

Yesterday, Bishop Coyner again blamed the multitudes for the words of a few (or, as Spock would say, the one). This is the second time in a month that a non-Western Bishop has criticized the Western Jurisdiction, by the way. In his regular email to his constituency, Bishop Coyner makes several claims about the Western Jurisdiction of the United Methodist Church that many others have already responded to:

The presumption by Bishop Coyner is that the Western Jurisdiction is without “a time of prayerful discernment, study, and holy-conferencing on this issue.” Indeed, their actions clearly did not come “in an atmosphere of prayer, theological reflection, humility, listening to God and listening to one another.”

This reflects a common presumption: the Traditionalists take the bible more seriously than Progressives. That the reason the Western Jurisdiction has fallen off the ecclesial cliff is that they do not do the theological reflection necessary to stay on the rigid path.

However, that is not the case. Rev. Dr. Tiffany Steinwert, in her Boston University dissertation, analyzed ALL the recorded floor speeches that dealt with homosexuality from 1968-2008 and categorized them as appeals to one or more aspects of the Wesleyan Quadrilateral. If Bishop Coyner was asked, clearly he would think that those “more conservative” would appeal to the Bible more than those “more liberal.” However, that is not exactly the case. Here’s the graphic from her dissertation: 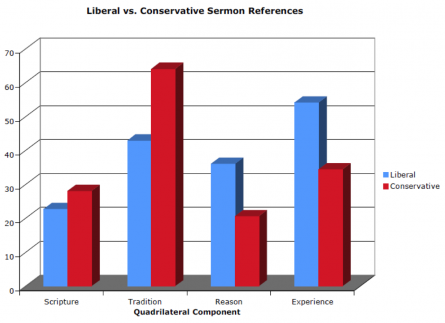 As you can see, Liberals and Conservatives used Scripture almost equally as a “point” in their sermons (Steinwert’s term for floor speeches). The bigger discrepancies come from Conservatives referencing “Tradition” more and Liberals using “reason” and “Experience” more.

So, those with understanding will see that the Bible grants inspiration to both sides of this ecclesial divide. Bishop Coyner, in his remarks, clearly believes that if those pesky Progressives read their bible more, they wouldn’t be on this path. But that is not the case–not today, and not when the good Bishop was in seminary.

Bishop Coyner, the good people in the Western Jurisdiction did not just wake up one day and throw a temper tantrum. Their stance on Biblical Obedience was reached as a collective whole by vote after individual reflection and journey…many of them decades in the making. To dismiss them as without reflection or dedication to biblical understanding is to fall far short of their mark.

Instead, through Reason and Experience (informed by the Bible) the Western Jurisdiction has determined that there is a way forward and they are offering Biblical Obedience as that path. Their way is essentially “Change the prohibition or ignore it. It is wrong.”

We need a left and a right wing to fly. That is true. But we also need understanding as to how the two wings work together and coordinate to help the bird soar. The Western Jurisdiction is claiming that perhaps the two wings do not have to have the exact same polity to be in the same mission and the same church together. That uniform expression of mission is a hindrance to unity in mission, and the Western Jurisdiction is tired of being out-of-touch with the creeping secular culture that will have a strangehold on the Bible Belt in a decade or so…and it can’t wait. Diversity in mission is already unofficially the case as our United Methodist Church has strong regional differences (and I’ve served in three jurisdictions now…it’s true) and varying degrees of theological concern…this Biblical Obedience movement just makes plain what is already in practice.

This is an offered way forward (contrary to Bishop Coyner’s claims), and it will be the path for the next three years until General Conference 2016 (which will be hosted JUST down the road from my church in Portland, Oregon) or until the Judicial Council strikes it down. Either way, it is a way forward, it is offered after intense theological and biblical reflection, and it is offered in the United Methodist Spirit. Time will tell whether it was the best way forward or not.