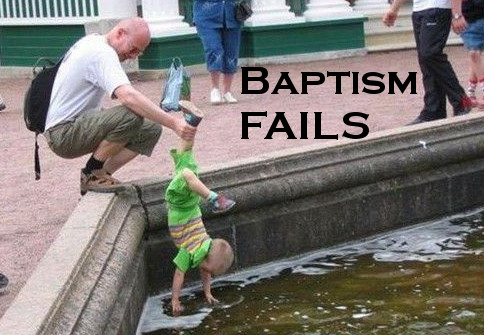 This is a three-part series on Baptism. Two this week, the third next week.

Ah, you knew it was coming right? Infant Baptism. The quintessential Ordination question in the Bible Belt is always “will you uphold and practice infant baptism?” to weed out the Baptists and those without a Wesleyan understanding of baptism from the ministry.

That’s the ideal. But I suspect most clergy have heard stories of other pastors who refuse or neglect to do infant baptisms (we call them MethoBaptists or Baptodists).

The most egregious of my stories of that one of my clergy friends was assigned to a new appointment, succeeding a multi-year pastor. He found that a ton of families had children that were not baptized…a dozen children! Sure, for my friend, he got a terrific dashboard as he baptized more people that year than in any previous year. But what message did the clergyperson prior give to the congregation? Why would he not uphold the unbreakable of ordination vows?

It’s an anecdote, right?  Surely there aren’t churches out there that outwardly discourage infant baptisms. Surely not, right? Right?

Wrong. One church (which I will not link to) is a United Methodist Church, pastored by a United Methodist full elder. Like most churches, it has a “What we believe” section of their website. Here’s the [redacted] section “On Baptism”

[We] offer either infant dedication or infant baptism, leaving that decision to parents.  Any prior baptism in a Christian church, including infant baptism, will be acceptable, although we have a strong preference for celebrating adult, believer’s baptism.

Well, if it weren’t for the “scheduling a baptism” page. Remember last week’s discussion about baptisms being held after church? For this particular church, adult baptisms are held during the sunday worship hour. Infant Baptisms? From their “what we believe” section:

Infant baptism is offered three times each year, typically on a Sunday afternoon.

Just to be clear, there’s a difference between a church that offers infant baptism and an individual that doesn’t want it for herself. The latter is fine and a personal preference. The former is difficult when one considers the doctrine and worship experience that the United Methodist Church holds in common.

Article XVII—Of Baptism: Baptism is not only a sign of profession and mark of difference whereby Christians are distinguished from others that are not baptized; but it is also a sign of regeneration or the new birth. The Baptism of young children is to be retained in the Church.

Furthermore, in the Book of Worship, Baptism is to be open to the following people:

Persons of any age are suitable candidates for baptism because Christ’s body, the Church, is a great family that includes persons of all ages. On the day the Church was born, Peter preached: “Repent, and be baptized every one of you in the name of Jesus Christ so that your sins may be forgiven; and you will receive the gift of the Holy Spirit. For the promise is for you and for your children” (Acts 2:38 –39). The New Testament repeatedly records that when a believer was baptized, the believer’s whole household was baptized (Acts 16:15, 33; 18:8; 1 Corinthians 1:16). Nowhere does the New Testament record, or even suggest, that any Christian family delayed the baptism of their children until they could make their own profession of faith. Jesus’ words, “Let the little children come to me, do not stop them; for it is to such as these that the kingdom of God belongs” (Mark 10:14b), tell us that our Lord has expressly given to little children a place among the people of God, which holy privilege must not be denied them.

So, how does this church rationalize that it will create a “separate but equal” category for infant baptism? How does that fit within a Wesleyan understanding of grace and sacraments of grace? I don’t know, but I’m sure our commenters will let us know…

In a final comment, let’s take this to the next level: picking and choosing which doctrines we uphold and which ones we look-the-other-way on.

The pastor of this church is a signer of the FaithfulUMC.com resolution, which criticized the Bishops for not “enforcing the Discipline” when it came to clergy offering to bless same-sex unions. And yet the church’s website is openly de-valuing with the Articles of Religion…which are unchangeable by anyone in the United Methodist Church. They cannot be changed, even by a 100% vote of General Conference and a hostile takeover of the Judicial Council.

So the signer of the FaithfulUMC document criticizes the Bishops for not enforcing the Discipline on doctrine that is changeable and may change in the future…but the signer’s local church is creating a “separate but equal” category that, in this blogger’s opinion, obscures an unchangeable doctrine in the United Methodist Church.

So, this is a big #baptismfail.