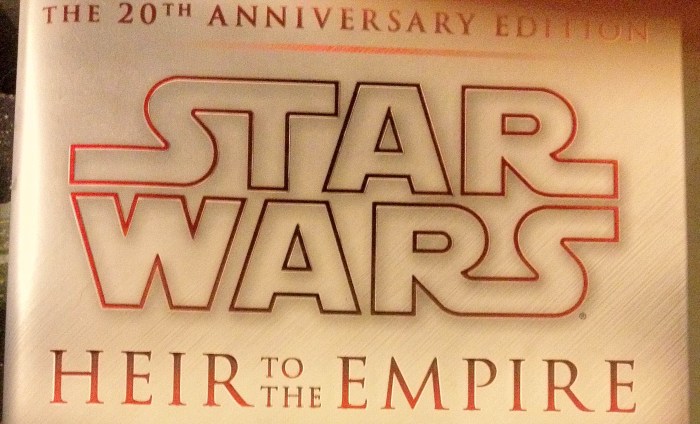 A little under 20 years ago, it started.

It started small, only once, but after that first time, I was hooked.

I looked forward to the second time. Then the third time.

Then I would go back to the first one and re-experience it.

20 years ago, sci-fi author Timothy Zahn was contracted to write a trilogy of books that would ‘extend’ the Star Wars Universe beyond the movies and the comics. The trilogy was called the “Thrawn trilogy” after the introduction of a new character Grand Admiral Thrawn, an Imperial who threatened to undo the Rebellion. It had drama, intrigue, humor, and clever writing that had tidbits for repeat readers. In short, a story worthy of the name Star Wars.

My copies of this trilogy? My dog-eared paperback copies (one of which is split down the middle) were signed by Timothy Zahn at a Comicon-like event whilst in high school (I know, serious nerd cred here…shut up). 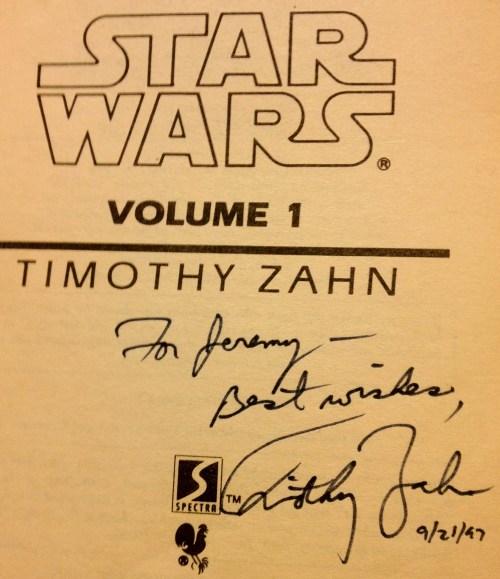 It went from that first trilogy to the Kevin J. Anderson trilogy (which, honestly, sucked. A sun crusher that destroys stars? Please. And even such a ridiculous object predated JJ Abrams’ Star Trek Red Matter, so there!) to a few more books to…well, I’ve posted before how many books I have.

The thing is that people will take their hobby and view their life through that hobby. It’s little wonder that I often think in imagery from the Star Wars universe. And often when I read star wars books, I highlight affirmations or situations that reflect the theology/philosophy books that I’ve read. Given that every Star Wars book involves a level of ethics and care/concern for the helpless, they often are strong conversation partners.

So I want to thank Timothy Zahn for writing that first trilogy that I started reading in a library in rural Oklahoma and bought with chores money, and finished probably the first night I brought it home. It’s been an amazing journey, and even though the series has gotten as convoluted and heavy as the United Methodist Church’s bureaucracy and polity, that makes it the perfect companion for someone in that role.

Any other Star Wars extended universe readers out there? Favorite story arcs? Or am I all alone in my theo-star-wars-nerddom?