Home/Reviews/Keeping the Faith in Seminary 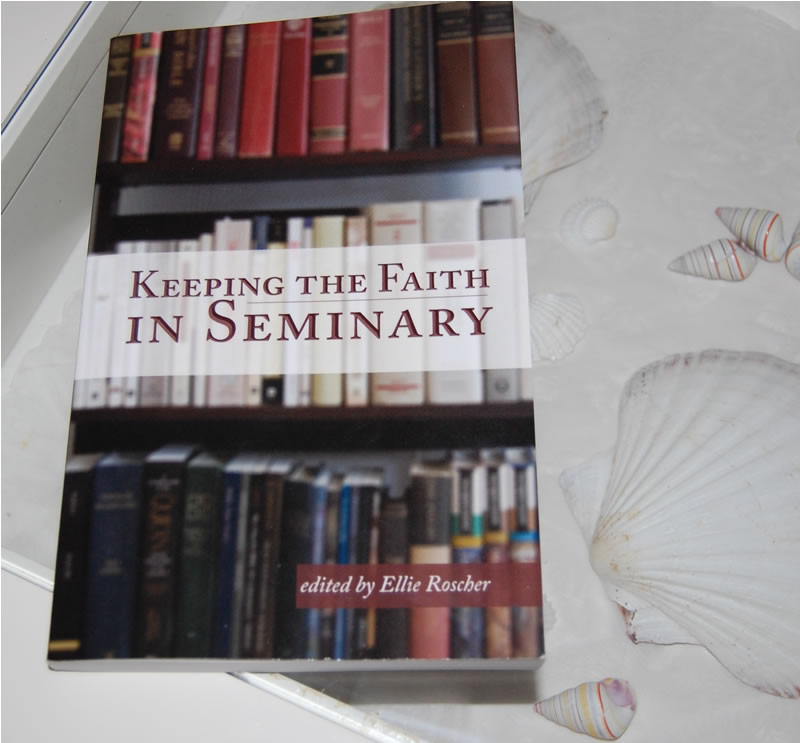 Thanks to this blog, I’m now published in two anthologies. The first was “The Legend of Zelda and Theology” last fall. And now the second is in “Keeping the Faith in Seminary” edited by Ellen Roscher.  It would be a great book for the soon-to-be seminarian who is in your family, network of friends, or congregation. Here’s its official teaser:

Keeping the Faith in Seminary, the newest release from Avenida Books of Minneapolis, is a compilation of essays that address issues of theological formation and vocation for people who love God, the world and the church. Seminary graduates, professors and family members reflect on their experiences with humor, fondness, criticism, and ultimately, hope for what seminaries can and should be in our ever-changing world.

Dr. John Nunes, CEO of Lutheran World Relief, says, “These real stories will enchant, telling of the Spirit’s nudges, of a community’s nurture, of wisdom reaped through life’s detours.”

Dr. Stephen A. Hayner, President of Columbia Theological Seminary, adds, “For some, it will be a survival manual. For others, a challenge. For all of us, a must-read!”

The common (mis?)characterization of seminary is that it breaks down your faith and rebuilds it in the seminary’s image. Several of my friends went through crises of faith during seminary, ranging from shock that Moses didn’t write the first five books of the bible, to textual criticism rendering that the bible is the “exact word” difficult, to feminist interpretations that challenged long-held theological assertions.

I didn’t go through as many crises personally, as I had a Religion/Philosophy undergrad degree and got all those shocks done with in college. But it was a challenging and stressful time, so I was happy to contribute to an anthology of former seminarians who wrote about how they kept their faith while in seminary.

What did I write about? Theology and Star Wars…obviously! Here’s a teaser of the chapter I contributed (complete with footnotes, because that’s what academics do):

Use the Force, Lukan Source: What Seminarians can Learn from Star Wars.

As a child, my first experience of what seminary might be like came while watching Star Wars. I watched the greatest chapter of the series (The Empire Strikes Back[1], obviously) and saw the balcony fight scene between Darth Vader and Luke Skywalker. Darth Vader revealed to Luke that Vader was his father, and Luke hung by a thread deciding whether to join him or plummet into the abyss. It wasn’t the dark offer that struck me (even as a child I knew Luke would choose good because that’s what heroes did). Rather I realized that this paternity information was what Yoda didn’t want Luke to find out before he was ready. In Yoda’s pedagogy, information had to be revealed only when the student was ready for it.

I believe this is a common perception of what seminary is: there is some dark knowledge about the bible that people receive at seminary. They go through a trial of faith, they survive seminary long enough to get their diploma, and then they lose their faith or become religious professionals that hide that knowledge from others. Biblical authorship is not often preached by popular pastors, Rahner and Tillich are not part of book clubs, and forget trying to outline the Process worldview or offer a Feminist critique of Adam & Eve to a rural congregation. While academics post-seminary certainly address these areas, as a pastor I am struck by how little my colleagues use of their seminary education with regard to academic topics and how negative they are about their spiritual journey in seminary.

I don’t know about you, but my three years of a rigorous seminary education was tough and an emotional journey. And yet now, six years removed from school, I can see more clearly what was happening during my tenure. Perhaps it is only when our seminary education is complete that knowledge of what we accomplished is made known to us. It is only when we have gone through the trials, confronted evil, engaged doubt, and emerged with the paper in hand that we finally get it. Only now, at the end, do we truly understand.

It is my belief that seminary and Star Wars accomplish the same goal.[2] Star Wars creator George Lucas based elements of the Star Wars stories on Joseph Campbell’s The Hero with a Thousand Faces[3], a 1949 study of the thousand-year-old myths and modern stories. Campbell claims that most hero stories follow the same pattern and while Campbell identified 17 different elements (and most are in Star Wars), the three main categories of these elements are Departure, Initiation, and Return. While Campbell is rightly criticized as sexist and dated regarding social issues (ie. women are never heroes–always damsel in distress or side characters), it is this author’s contention that the form of the hero’s journey parallels the seminary process, and the goal of Star Wars can parallel the seminarians’ goal.

Through examining the hero’s journey in Star Wars, one finds touchstones for the Seminary experience, how to keep the faith in seminary, and what role seminarians have in society after their paper is in hand.

Great gift for a soon-to-be or struggling seminarian!

Thanks for reading and thank you to Ellen Roscher for the opportunity!