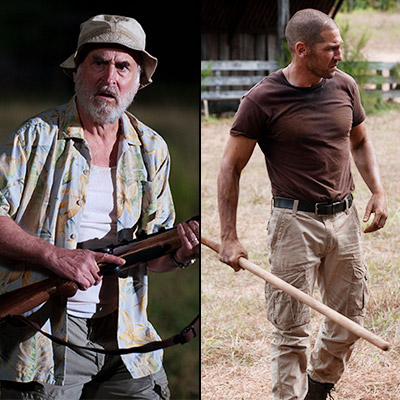 I finally got around to watching the Season Two finale of The Walking Dead, a post-apocalyptic series on AMC that deals with a world where Zombies have taken over and humans run, hide, and fortify to survive. It’s bloody and violent but has really interesting ethical twists…kinda like a much grosser LOST for me.

Anyway, given it has been two months, I figure anyone that would see it has seen it, but just in case, this is a spoiler alert. Okay? Okay. Let’s go.

So, in essence, these two were antithetical characters and often fought. In the episode where Dale dies, he had fought with the others about keeping a young man Randall (not from their group) alive. Shane wanted him dead so he wouldn’t tell his people where the group was hiding out. In each episode, practically, Shane and Dale were the Devil and the Angel on the shoulders of Rick, constantly pushing him in either direction.

And now the Angel and the Devil are gone, dead. And Rick is left alone to lead the group without his contentious advisors, warring but external. He now has to rely on his internal moral compass, which is harder to hear.

But that’s not all that has become internal. In the Season Two finale, Rick tells the group the horrible truth about why an un-bitten person became a zombie:

Daryl: I found Randall. He had turned, but he wasn’t bit.

Beth: How is that possible?

Rick: We’re all infected…the CDC told me. Whatever it is, we all carry it…

The virus is not from the walking dead zombies. The virus is likely inside every person and is merely accelerated by zombie bites; otherwise, it lies dormant until the person dies. This changes the group’s battles radically: no longer are they just fighting external walkers, but they are fighting to find a cure before the virus inside each one of them takes them over.

In the span of three episodes, the motivators have gone from external to internal, and the group’s battles have changed from interpersonal to deeply personal.

In the Message’s translation of Romans 12:1, we hear this:

So here’s what I want you to do, God helping you: Take your everyday, ordinary life – your sleeping, eating, going-to-work, and walking-around life – and place it before God as an offering. Embracing what God does for you is the best thing you can do for him.

The Christian life is also about moving from external to internal motivators. When we are little, we are swatted when we don’t follow the rules, we are given stickers or cookies for good attendance, we are told to sit still in church, we are taught to do repetitive actions. But over time, our motivators of parents, teachers, and stickers become more distant and the only motivators to continue in our spirituality become internal. If we sense the need in our hearts and souls to follow on Christian actions, then we do. Those quiet internal motivators are very difficult to discern, much more difficult than for children or youth who are used to external ones.

But like Rick in The Walking Dead, we’ve also got to deal with the times when our external motivators become silent and all we can rely on is our internal motivators. It’s those times that what we get out of worship, sermons, devotionals, and bible study comes to the surface. Will we be wayward and lost without our external motivators? Or will we know what and how to respond because of the formed internal sense of direction that we got.

Maybe for an extrovert like me who doesn’t get much out of spiritual disciplines (cue *gasp*), I can ‘hack’ my understanding that the external motivating practices aren’t for the moment, they are for the rest of my “walking-around life” when I have to rely on my well-honed internal motivators.

These are my spiritual reflections on science fiction for the day. Thoughts?