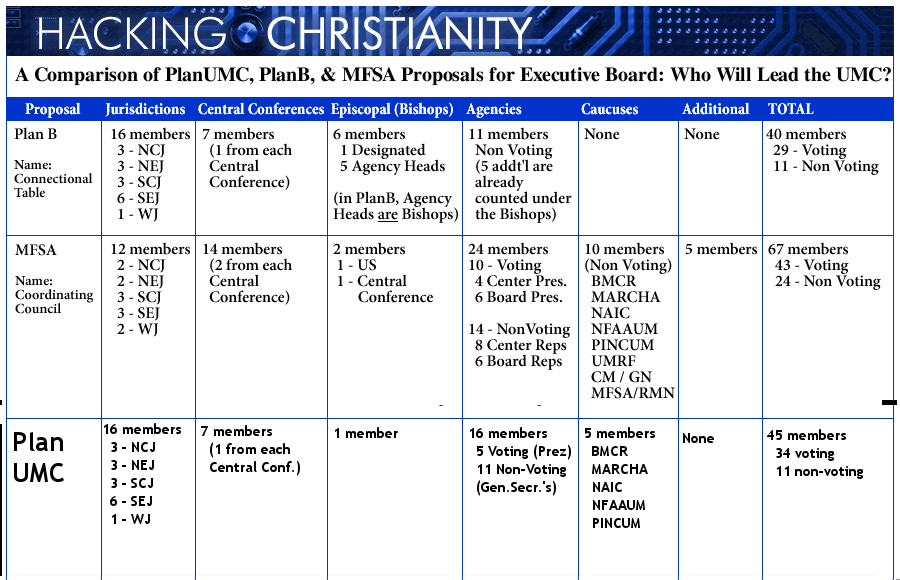 How We Got Here

On Saturday night, the Committee tasked with this Restructure voted down the measure that had been debated and agreed upon after 3 days of work (due mainly to sabotage by the IOT/PlanB folks who wanted to take their balls and go home). They then voted down the pure unedited forms of PlanB, MFSA, and the IOT plans. Everything. Nothing left the committee as a recommended path.

So on Sunday, members of the IOT and the PlanB people got together in a marathon meeting starting at 4pm and still without a compromise measure by 9pm. The groups’ participants included Don Underwood (who supported the CT plan) and Christine Dodson (who supported the PlanB plan) and Central Conference delegates and…oh yeah, no one from MFSA even though they could have easily been invited. Sam Hodges’ article at UMReporter says “while no MFSA representative participated, there were negotiators who had backed the MFSA plan.” In other words, they wrote the ‘compromise’ measure including 3/4 of the active groups (only one of which wrote actual legislation in the ADCA) and they excluded the young adults who were the majority of MFSA representatives. So calling it a compromise is a bit loose.

On Monday, apparently a plan had been brokered and was given to the General Conference for printing in the daily publication of legislation. Then no copies were distributed. No delegates or press or bishops or anyone was able to have an additional 12 hours to read. This conference is full of back-room deals and exclusion of the young adults and central conferences from the adults table. It is just ridiculous.

But let’s stop grousing about the past (though we will return to this) and look at the plan ahead of us.

Above the text is the plan for the governing body of the UMC (mobile users click here), called the General Council for Strategy and Oversight.

Some thoughts on the Executive Board:

Changes to the General Agencies
The Rest of the Plan

There’s a lot I like above. It reduces board size while keeping us from too much centralization. It merges GCORR and COSROW ( EDIT: bad info sorry, that is not true). It raises Central Conference voice (in everything but fiscal matters) in many ways. It includes the ethnic caucuses with voice and vote.

The thing is, even if I 100% liked the product, I am appalled at the process it went through. The original Call To Action process was flawed, with questionable voting and discussion of voting from the start. At General Conference, the IOT members checked out of the perfecting of the church proposal so they could swoop in and try to get their original amended proposal done. The PlanB folks checked out when they were being outvoted by MFSA and Central Conference delegates. And when this whole shebang was put together, the young adults were completely excluded from the conversation. As I’ve said before, this process shows that we want to be in ministry TO young people, not WITH. Finally, the utter lack of Central Conference voices or participation in analysis of the issue is deafening and disheartening

I refuse to give consent to a product that had a flawed process. Like any local church, the process of determining decisions is just as important as the product. The Global church should be the same way. The “ends justify the means” mentality has never worked for me, and indeed I criticize my own issue-advocacy friends for that tendency as well.

I hate to say it (because I supported a plan that was rejected and now I risk sounding petulant), but I’m now firmly on the side of “no reform this year.” The process was too flawed, the people too pigheaded, and the politics too whitewashing for this plan to be acceptable to the conduct and polity of the United Methodist Church. We have scared the General Agencies who are inefficient that they have a ticking clock to clean house or get taken out. We have an emerging young adult voice who have gotten involved and will not be disenfranchised. We have a renewed energy for the church to be better, and the tools to do it right next tme. And even Lovett Weems says we can wait for years before we are really in trouble…is it worth risking the 2 cents of every dollar that goes in the church offering plates to do the process right?

I’ve always been a champion of an equitable plan to reorganize the UMC. I believed in that plan and I believed that the structure needed to be changed. But not like this. Not in this way. And even if my plan had won out to be considered in its entirety, if done in this process…I would be voting against it. And you can ask my friends and congregation if they believe I would be consistent like that. I am just not in that place after seeing the Sausage Factory in its rawest form (and this is my third GC), and I doubt I’ll ever be the same.

Process > Product is a renewed mantra of this Elder in the United Methodist Church.

Who may choose to support PlanUMC:

Who may choose not to support PlanUMC

This is not the United Methodist Way, even if the product is agreeable to you. I hope Delegates will join me in expressing their UMC values of equity and fairness in process as well as product by voting down the PlanUMC.