I was all set to write about this photograph that displays the “Denominational Goal” in five words: (1) Stop the Decline (2) Encourage Growth. 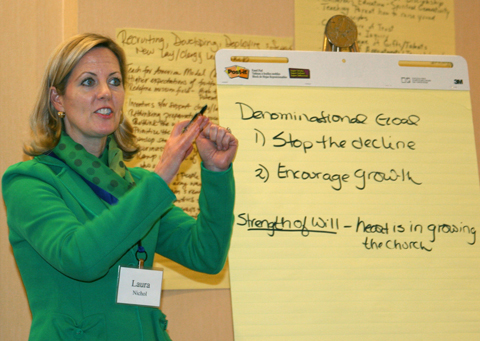 But then I saw that Becca Clark had written a much better response. So, instead of spending any more time here, go there and read it. Here’s a key segment where she talks about this focus on satisfying others’ numerical requirements :

It reminds me of a story entitled “Panic” in the fantastic book Friedman’s Fables. To paraphrase, a ring of dominoes finds itself in a pickle, as one by one, the dominoes fall. Each domino tries to hold its neighbor up, to stem the tide of crashing dominoes, but to no avail. Finally, one domino manages it; the crashing stops and the dominoes right themselves. The others ask how in the world that one domino was able to stay up, and it replies, “while you were all busy trying to keep others from falling, I just focused on keeping myself from going down.” This one domino held fast to its own strength, it’s own principle, rather than reacting to the instability around it.

The mission of the United Methodist Church is to make disciples of Jesus Christ for the transformation of the world. What if we really tried to figure that out and commit to that? What’s a disciple? How do you “make” one? How do you know you’ve got one?

Instead, we are focused on stopping the crashing around us, on preserving our institution. Has survival of the institution become our denominational goal?

Boom. Go check it out.