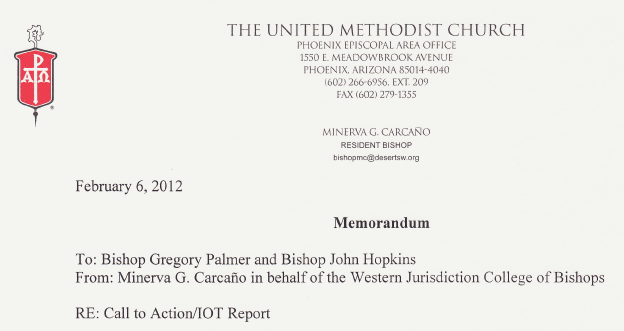 During the first week of February, a group of Western Jurisdiction Bishops, clergy leaders, and laity on episcopal and jurisdictional committees gathered together to talk about the Call To Action with members of the ethnic caucus groups. They wrote a succinct letter that outlines their major difficulties in a helpful way. They must have been reading my blog posts because the letter they drafted contains a lot of language that I resonate with. I encourage you to read it.

Their key points in the letter deal with the agency restructure; specifically, the Board of Directors that would be the highest perpetual body in the United Methodist Church and which would be competency-based rather than representative-based. Here’s a quote:

We believe that the proposed competency-based board is too severe a swing of the pendulum in the direction of ease, and efficiency at the expense of diversity and inclusivity and threatens to deprive the church of the perspectives and voices of the many cultures represented by our geographies, theologies and ethnic identities. With few voices present at the table, ease and efficiency of work may be achievable, but whose voices will be left out?

Note that I also use pendulum and efficiency language a lot. Glad to have some fans of this blog in the Western Jurisdiction! Or just people that use everyday English words. 😉 Ha! [/narcissism]

First, they are concerned about losing work already done. “We run the risk of setting up our new agency structure for failure and the kind of chaos that will not enable them to serve as a resource to our annual conferences and local churches.” In short, they are wanting the current practitioners and heads of the general agencies to prioritize their own agencies by defining what is essential and what is not. For example, the GBGM already restructured and reduced the size of their board, the Women’s Division had a significant restructure, etc. Doing away with these works by representative boards and replacing them flat with the structure made by a competency-based board strikes the WJ as “reckless.”

Second, they propose an alternative governing board. “We do not believe that a strictly business model will necessarily lead us to being a stronger Church.” They are wary of 15-member executive board. They propose an alternative structure (not related to MFSA’s Alternative Structure that this blogger supports) that incorporates the work already done by GBGM and other agencies to create more efficient boards:

Finally, they want monitoring agencies to be independent. “We are concerned that in placing the Commissions on Religion and Race and Status and Role of Women under the Justice and Reconciliation agency their primary monitoring function will be lost.” Both GCORR and COSROW are monitoring agencies, and having them under another agency diminishes their ability to be both prophetic and call other powers-that-be to account. Why do we have independent safety evaluations for companies? Because even well-intentioned internal evaluations miss things or obfuscate things due to corporate culture. These agencies must be set-aside to be most effective.

I’m not convinced by their agency restructure plan, but I do like the pushback against governance indiscriminate of diversity and representation. I think the more of this we see, the less likely we will see 15 members representing the diversity of the United Methodist Church in a few short months. And that’s a good thing. Like we are all saying, none of these offerings by the Bishops, CTA, MFSA, or anyone will be adopted whole-hog. We are just contributing to the conversation that will inform Holy Conferencing at General Conference.

The paper concludes with this timeless quote that we need to be wary of going forward.

It is in times of great organizational stress that our commitments to those on the margins and less represented the life of the church wind up being neglected, forgotten and often lost. We do not want this moment to be such a moment in the life of the United Methodist Church.