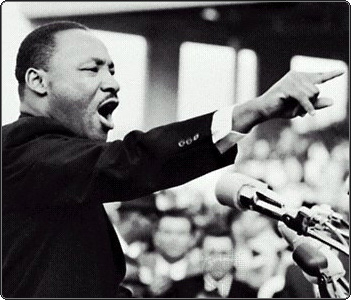 I’m trying out a new year’s resolution: listen to a recorded sermon on Sundays so I get the same attempt at spiritual inspiration that my congregation gets with me in the pulpit. My pick this week was MLK Jr.’s sermon “A Knock At Midnight” (mp3link) given in 1957. While listening and puttering around, one section towards the end of the sermon caught my imagination. It was Dr. King saying this:

What poppycock. The church can’t die. Clearly Dr. King hasn’t read the blogs and especially the Call To Action.

Clearly, Dr. King’s priorities were all out of whack. What kind of church would focus on social issues when we need to be focusing on church growth and institutional preservation? We are destined to survive and we know that “God is not finished with us yet.” Right?

I kept listening as Dr. King railed against churches that freeze up or burn up. Turns out Dr. King was exactly on point with his sermon preached 55 years ago. I couldn’t find a full-text of this sermon, so I transcribed it below from minute 24 to minute 29. Any errors are my own.

We have two types of Negro churches that leave people disappointed at midnight. One freezes up and the other one burns up. The one that freezes up is that church that says it’s a dignified church. Preacher preaches a nice essay on Sunday, he tries to mean it. The choir tries to sing with meaning and power, but they don’t sing negro spirituals or gospel songs because it reminds them of their heritage. They are ashamed they are black and their ancestral home is Africa…They build a church that has no relationship whatsoever with their past…

I see this tendency in the Anglo-centric churches. They are the churches that build college-size campuses and walled gardens away from the neighborhoods. They are the ones who move out of the inner city to plant their church in the suburbs, with the unfortunate effect that homeless people don’t often make the trek out that far. The ones who are ashamed of their wealth (on some level) that they celebrate in semi-private cocoons and create a parallel culture to the one that they are called to serve. I’ve seen these frozen-up churches who have no relationship with their culture around them.

There’s another church that burns up. In this church, the emphasis is on muscle-ality rather than spirituality. In this kind of church, people have more religions in their hands and feet than they have in their hearts and soul. In this church, sometimes even the pastor depends on his voice, on volume not content. And the people leave on Sunday saying “we had a great service today and the preacher just preached this morning” and somebody say “what did he say” “I don’t know what he said, but he preached this morning!” (congregation guffaws)

The other danger of this kind of church is that everybody will become so caught up in the irrelevant that they will not be concerned about the day-to-day problems.

The other kind of church is sadly on the rise in American Anglo churches as well, one that depends “on volume not content.” They are exemplified in either the feel-good sermons of Joel Osteen or the condemning-the-gays-and-women-and-hipster-men rants of Mark Driscoll. The refernce to churches that have a “zeal of God not according to knowledge” is my fear for the UMC as well. I fear we will have those types of churches that have a lack of value for theological education as a side-effect when our church leadership focuses on efficiency not effectiveness. Finally, if you read any of the conversations on the UM Clergy facebook group, you’ll see a perfect example of “being caught up in the irrelevant” fine points of doctrine that are used as weapons to condemn other pastors rather than as important articulations of values. The burned-up church is smoldering and it’s creeping this way.

Finally, in true Dr. King style, we get to the crescendo where the congregation is on its feet. It’s best listened to but here’s the transcript for conversation:

“You don’t do that…I won’t hear your beautiful anthem. You can preach your eloquent sermons, you can pray your powerful prayers, but I won’t hear any of it because your hands are full of blood for the things that I am concerned about that you would let justice roll down like waters and righteousness like a mighty stream.

“If you want to know what it is I require of you, it is simply this: do justly, love mercy, and walk humbly with thy God.”

The Call To Action wants us to spend the next decade of church resources on navel-gazing, on bettering our churches and worship experience and coffers so that we can reverse the mainline decline. But that is the utter antithesis of King’s writings and sermons, as the Church he envisions is an outward-facing church that wastes its money on the poor and wastes its political capital opposing unjust laws rather than building parallel empires to the culture around us.

While our church consultants and renewal groups tell us to stop talking about the hot topics, an echo from the past tells us today that if we aren’t in the business of equality and hot topics, then we are a church that has either burned up or frozen up.

My prayer for our General Conference delegates today is that they heed the call from Dr. King from 55 years ago and keep us as an outward-facing church: one that works on its discipleship, yes, but does so not divorced from the culture around us. Like the burned-up churches that are emotional without connection to intellect, we are in danger of being a spiritual practices church without connection to the practice of spiritual concern for others in both our structure and action.

So keep on working toward justice, Church. Keep on pursuing it for all of God’s creation, even when the church itself tells you that you are wasting your time, that that money won’t count towards being a “vital congregation.” Keep on doing it, and when all is said and done, the churches around you may burn up or freeze up or they may hopefully step up and be on the path towards the land where justice rolls down like water and righteousness like a mighty stream. Keep that dream alive today.