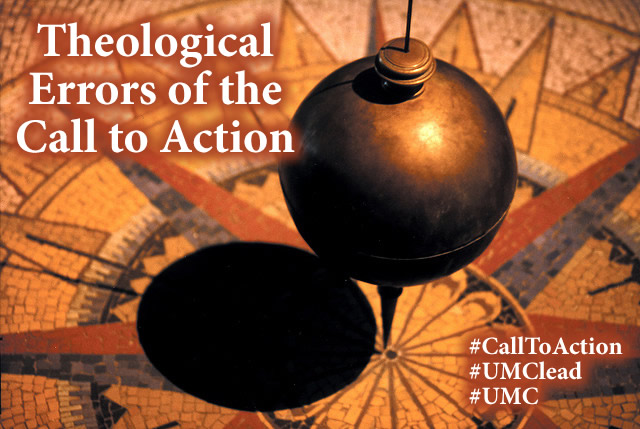 We are a little over 100 days until the Opening Session of General Conference 2012 where the United Methodist Church will consider one of the biggest re-organization plans in recent memory called the Call To Action. It’s no secret this blog is not a fan of most of the re-organization ideas and we have dedicated almost a dozen posts about it.

It is now time. It’s time for us to quit accusing the Call To Action as being a church proposal based on business principles rather than biblical ones. It is. But our church leaders see it as their ‘best’ hope and they adapt their theology around it. To those of us opposed to the dis/connectional nature of the proposals, this is a losing battle to point out what is already been tacitly accepted.

In three blog posts, posted every Tuesday in January, I offer the following critique of the theological foundations of the CTA movement. I find that the Call To Action moves us away from our Methodist roots and current reality by tendings towards values and sins that have no place in the United Methodist Church that we love.

I’m basing these posts on a sermon by an Episcopal brother in the faith who articulates a similar drift that the Anglican Communion is having and I fear the UMC is heading towards as well. I could have changed the word “Anglican” to “Methodist” and reposted it whole-hog and it would have worked. But I didn’t.

Enjoy. Thanks for reading.

The first theological error in the Call to Action and its affiliated proposals is the sin of Pride.

Pride has many biblical forms, from haughtiness to self-inflation to being conceited to seeing one’s self as equal to God in Babel-like actions. Our institutional form of pride is called consensus which assumes unanimity on issues and whitewashes over diversity. It is a theological error because it does not pass the Wesleyan Quadrilateral tenet of reason:

[C]onsensus in itself cannot form a term in an argument when a given proposition is being reexamined: to suggest that something must be true either because “we’ve always believed this to be true” or because“everyone says so” is simply a form of logical fallacy — for the truth of a proposition is established neither by being long held or popular: the church can err.

Consensus, after all, means a “common mind with little or no opposition” — so the moment opposition — a new questioning, a new challenge — appears, consensus ceases to exist, and the new proposal must be examined on its own merits against the possible errancy of the formerly unchallenged position

One of the annoying tactics in rhetoric is the argument by consensus. We see it in many forms. Blogs and authors will say “the emerging consensus is…” or “the weight of history is behind it.” This is most often used by traditionalists who want a church to stay as it always has. In this case, the “emerging consensus” is that the current structure of the UMC doesn’t work and must be replaced. But by what? It is here that the “emerging consensus” that the business community has figured it out (and we brought on multi-millionaire business consultants to “guide our discernment”) and we must restructure the UMC like a corporation to survive in a competitive world.

The most overt sin of pride in the Call To Action is its assumption that a multi-million member church can be run like a corporation with a board of directors sitting at the head of the table directing the actions of the general agencies, being fed grant proposals and church metrics to make their decisions. While Mary Brooke Casad is correct in stating in her blog post that the board of directors is only over the general agencies, their ability to control the purse-strings and reallocate money to react to shifting winds without General Conference’s every-four-years-reasoned-approval strikes me as pridefulness. Even if they do not allocate money themselves, the ability to deny money requests is a fiduciary responsibility I would hope lies with a body not chosen by the current power structure (the current Connectional Table would choose the new board…really…didn’t know that until Casad’s blog post)

In the CallToAction’s insistence on a board of directors with no diversity requirements and chosen by the current (apparently failed) power structure, the sin of Pride is evident. It is an edge of a pendulum swing that has no place in the top tiers of the United Methodist Church in form or practice.

The second theological error in the Call to Action is the sin of Humiliation.

Humiliation is at the opposite end of the pendulum swing from pride. Humiliation is what failure feels like. When we are embarrassed about something that falls short, we want to cut it off. When teenage girls hate their bodies they cut themselves to relieve the pressure. When families are embarrassed about alcoholic Uncle Albert, they cut him off from their gatherings. When church ladies plan social events, they exclude the annoying ones from the parties in passive-aggressive fashion.

Pride resides at the top of the UMC hierarchy; Humiliation at the bottom. Those congregations in rural or under-populated areas that cannot match the numerical success of their urban or suburban or even county-seat churches are seemed to be seen as humiliations to the body. How can I possibly say that? They are the ones that are being adversely affected by the Call to Action in these ways:

In the CTA’s insistance that we “celebrate success,” the unspoken flipside is that it “abandons failures” and by doing so commits the theological sin of humiliation at the numerical state of many of our God-fearing churches. It is the other edge of the pendulum swing that does no good in the lowest tiers of the United Methodist Church.

Hear the good news: The United Methodist Church resides in neither Pridefulness or Humiliation, resides in neither a high belief in its infallibility or a disbelief in the potential for discipleship in small churches. Rather, the UMC’s theological claim is to Humility which hangs at the center of the pendulum swing.

Humility stands as a meek (which does not mean “weak”) witness against domination by so-called consensus. [S]ince individual human beings may err, there is no guarantee that an assembly of such errant beings will not also err. Humility points out that even an overwhelming consensus can be quite profoundly mistaken — Galileo can testify to that!

Bishop Peter Weaver echoes this sentiment in the 2004 Preface to the Book of Discipline:

We do not see the Discipline as sacrosanct or infallible, but we do consider it a document suitable to our heritage.

Humility lies at the Methodist Middle with Humiliation at one end and Pride at the other. It is a difficult place to reside, being not too prideful of ourselves to act with haughtiness, and being so ashamed of our failures that we want to cut them off. And it is not a place we are always comfortable residing.

Our Methodist discomfort with humility goes back to the beginning. John Wesley’s tradition (and ours) is from the Anglican tradition (Church of England, Episcopal, Anglican Communion, etc). When John Wesley edited their Articles of Religion to make our own, he removed the following line from our Article 13:

As the Church of Jerusalem, Alexandria, and Antioch, have erred; so also the Church of Rome hath erred, not only in their living and manner of Ceremonies, but also in matters of Faith

Hence Wesley removed one of the most overt references to errors in church history. But at the same time, Wesley also edited the articles to remove some of the doctrines of which his constituency did not have unanimity or which, presumably, he didn’t agree with himself.

Humility means on the institutional level that we do not place judgment in the hands of too few, or heap it upon certain categories. It means that we accept that the church “hath erred” and could be erring at this moment–women clergy and descendants of slaves will tell you that the church hath erred! It means that we retain power in a slow-moving every-four-years General Conference of democratically-elected leadership, unburdened by the inertia of the previous church leadership picking its successors, rather than the knee-jerk potential of a continuous body.

Humility ties deeply into the next two blog posts, so we’ll return to it again. In the meantime, here are two examples of how this humility looks in practice on both the institutional and the values-driven levels of the Church:

The United Methodist movement remains at its center a church comfortable with humility in doctrine and practice. I firmly believe that any initiative that falls too far into Pridefulness or Humiliation is not the Methodist way. Just as a pendulum swings from one side to the next, we are in danger of resting on one end or the other.

But my faith is unshaken, I believe that the Spirit will guide our delegates to a properly delineated and debated proposal that will not be perfect, will not be sacrosanct, but it will be more suitable to our heritage as the United Methodist Church than the Call To Action presently is.

It is my hope that General Conference delegates in 112 days remember the call to humility contained in this appeal. Feel free to share this blog post with your delegates (ask your conference office for their information, it should be publicly available).