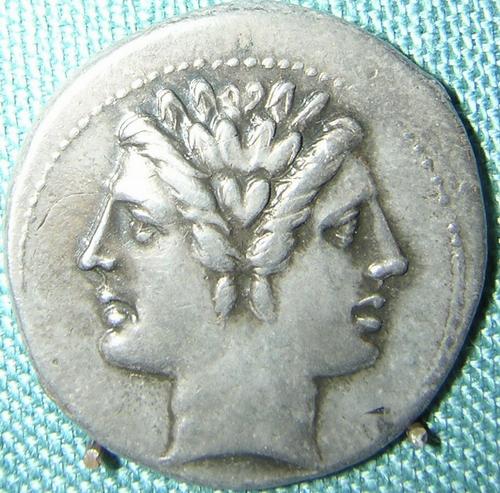 The ancient Romans believed in a lot of gods, gods like Apollo, god of music, Jeff the god of biscuits (hat tip Eddie Izzard). But among their gods they had a god of doorways. His name was Janus. Janus had two faces, one looking forward and the other looking back. He was the god of beginnings as well as endings. He was the god of transitions. He gives his name, of course, to this month, “January,” the beginning of the new year and the end of the old year. And incidentally, Janus, the God of doorways, is also where “janitors,” get their names, as the keepers of doorways.

The two heads of Janus and that Janus is the god of doorways remind me vividly of the two gates of the Oklahoma City Bombing Memorial. In 1995 there was a bombing in Oklahoma City at a federal building. I was living in Oklahoma city, going to school 9 miles from the site. My father had worked (or would be working) at the building a few months before it was destroyed in April 1995. My classmate’s father was a first-responder and told of the tragedy that he found there.

Today on the site is a memorial with two gates, one marked 9:01am, the other 9:03am. In between those two gates, held in stasis, is the horror of domestic terrorism that happened at 9:02am on April 19 1995. Rows of chairs mark people’s passings, rows of smaller child-sized chairs marked younger passings at the buildings’ nursery. There’s a reflecting pool, and at night the chairs have lights that seem to glow underneath them. I’ve walked it many a late night in college. The entire memorial is encased in two doorways, two arches that enclose the moment.

It is beautiful and poignant but the problem I have with these gates is that they are identical. Everything about them is the same except for the time. It’s as if what happened between the gates didn’t affect the gates because they were identical before and after. While it can be a symbol of American patriotism and steadfastness, I found it telling that we wanted to isolate what happened and not let it be integrated into the new gate, to not let the wound show.

And we have the god Janus to blame. The problem we have with transitions is that we are used to being janitors, keepers of the doorways, rather than walking through the doors and entering a new space with gusto. In other words, we are very good at maintaining the doorways but not actively walking through them. Look at our resolutions for the new year. Probably to lose weight, join a gym, spend more time with our family, save money, take a vacation. Those are resolutions aimed at managing our stress and our lives, re-allocating resources to do better. But they are just maintaining the doorways. We aren’t looking for something new, we are just making do with what we have.

In January, most of America worships still the god Janus, keeper of the doorway, when we maintain the status quo in our lives even as we seek to change it.

But to those hackers among us, those who are not content with what they are given, those who tinker with their theology, those who don’t just regurgitate the preachers’ or authors’ words back to our own lives, we are living in an in-between time. We are living between the first coming and the second coming of the reign of God. And it is this god of transitions that maintain the status quo that we are called to reject.

And so, as we step boldly once again across the threshold into a new year, our greatest hope should be that in this in-between time, God is not finished with us. God is still at work in our lives and in creation. God is making all things new. Slowly at times, but working nonetheless

What we need now are not better janitors of our lives, but hackers who build better rooms beyond the doorways. Janus was the god of transitions, he looked both forward and back as he held up the door. In Christian theology, our God refuses to be contained to simply holding up our burdens, helping us manage our pain, but instead gives us the strength, vision, and common purpose to let go to make all things new even in the midst of the old. Our God is not a god of doorways, but is God with us who walks through life with us, never abandoning us. When every new thing comes our way, we are not alone; we are with God.

And so, fellow holy janitors, keepers of this new day, let us pray that God may fill our hearts with joy and hope in believing; save us from our fears and doubts; and give us courage and strength to be instruments of the in-breaking of God’s promised reign.