Home/Theology/christology/2012 for Vendetta: The Story is Bulletproof 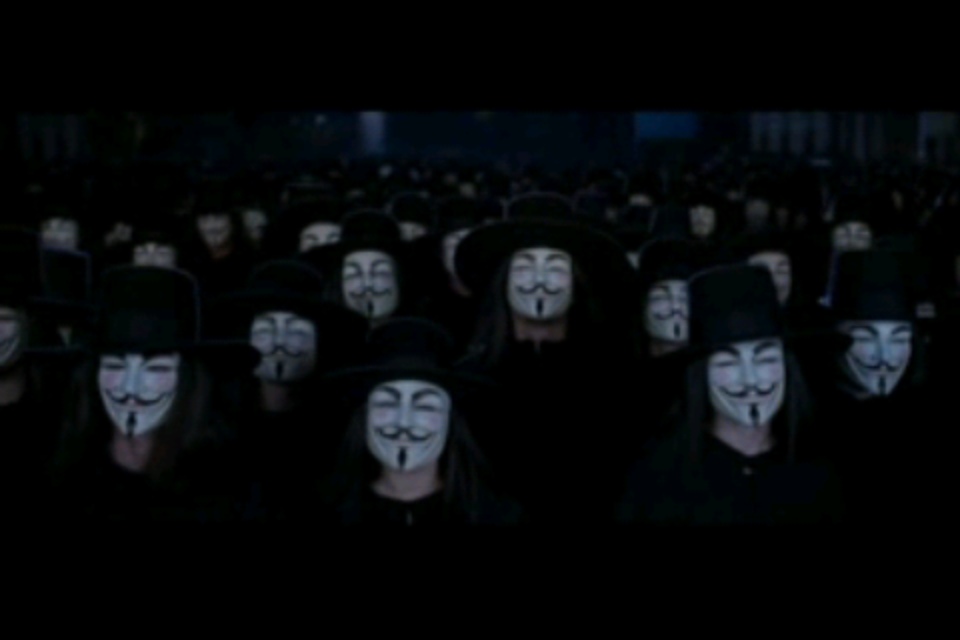 Forgive me blogosphere for I have sinned. It’s a new year and this blog has gone through its longest posting drought ever: 22 days since my last post. Wowzers. I’ve got too many fingers in too many digital pots and for some reason, December is busy for clergy. Oh well, glad to be back and roaring in like a lion this week.

In thinking about a new year, like everyone else is posting about, I’m drawn to a movie I re-watched while traveling this Christmas season: V for Vendetta.

I noticed something that I had stupidly not seen before. Like, total unobservant bonehead.

We know from the movie (this is the sequential version), that while V was being experimented on in the Empire’s prison, he received notes from a fellow prisoner next door. Her name was Valerie, an actress persecuted for being gay, imprisoned and experimented on. She feeds notes written on toilet paper through cracks in a wall to V telling her story and giving him hope. She dies but V survives. Similarly, when Evey (Natalie Portman) is imprisoned, V gives her the story the way he received it and she is inspired to fight and live. Evey and V eventually bring down the Empire and give the country back to the people.

So that’s the way how a condemned woman persevered and got her story told, which inspired V, which inspired Evey, which finally brought justice (well, at least vengeance) to the oppressors.

At the end, nearly everyone in London has been shipped the Guy Fawkes masks and they stand there in a crowd watching V blow up Parliament. People start taking off their masks and stand in awe. And…did you notice this scene at the end of the movie?

That’s her. That’s the actress Valerie standing there with her lover. Also in the crowd are a little girl shot by the Empire and Gordon the satirist of the Empire. All these people are dead but they stand there in the midst of the crowd as Evey says this about V:

Finch: Who was he?
Evey: He was Edmond Dantés… and he was my father. And my mother… my brother… my friend. He was you… and me. He was all of us.

The story survived and at its culmination, the originator stood with the other saints and sinners in observation.

In the movie, a vendetta is shown as an all-consuming, simmering, patient, and justifying of violence. This is true. But it’s also a movie about how a single story offers hope time and again to those who would seek justice and remove oppression. The people who told the stories are dead, but the story survives against all odds. And when the story reaches its climax, the storytellers are there gathered in recognition of the long road it took.

The same it is with us. The story of Israel in the Scripture is a long winding one, one which the story of God working on their side survived. But sometimes it took wrong turns, especially of the establishment of the kingdom. The Israelites in Jesus’ time had turned a promise of an everlasting kingdom into a vendetta against the Romans. They literalized the story, made it into a violent overthrow (ala the Zealots) or a cultural idol against all others (ala the Pharisees), and thus it is little wonder they didn’t recognize the fulfillment of that story in Jesus Christ.

We also have the long roads that can become either Vendettas or Vindications. They become obsessions that we hold to against all others. You know what we’re talking about. But those that are aligned with God’s promises, those that are truly attached to the wellspring of life, they are bulletproof but slow, oozing not surging, the slow work of God.

My prayer for 2012 is that my vendettas become distinguishable from my passions, that my kingdoms become less to God’s reign. But no matter vendetta or hope for vindication, my prayer is that the stories survive, that the stories of yours endure to their fruition, and that even when the powers of this world prevail for a time, even when it is darkest before the dawn, even when the bullies get away with it, even when the President authorizes indefinite detention, even when the UMC turns to the executive in moments of crisis…that the story survives, the story perseveres and inspires and transforms people and communities…one toilet-paper note at a time.