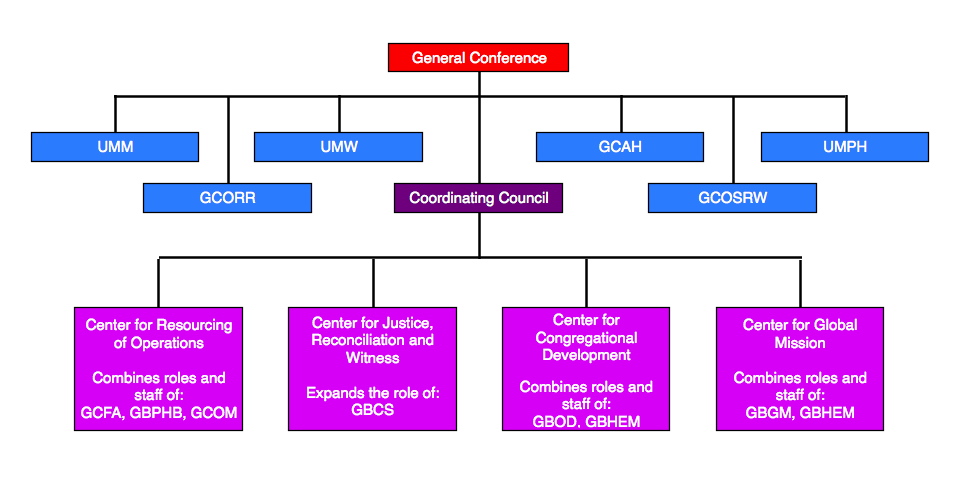 Oh snap! Attached is a press release from a caucus coalition that has offered a faithful alternative to the business-based reorganization proposed by the Call To Action.

I think it is important and addresses some concerns that Hacking Christianity has examined before. For example, we were concerned about appeals to executive authority. The counter-proposal below replaces a 15-person executive board with five 33-person boards that represent the diversity of our church in better less-tokenizing ways. It still represents a 66% reduction in the current boards and overall board costs are similarly streamlined.

It comes with a website www.mfsagc12.org that outlines the proposals and has some graphs showing how it represents the UMC in more holistic ways. If people blog about them and link back, I’ll include your thoughts in a write-up later this week or early next week.

Full disclosure: I am a submitted co-signer for the legislation presented by this Coalition. Yep, not all bloggers just opine away, some actually do something.

More later. Just wanted to get the conversation started.

One of the largest mainline denominations in the United States is warming up for a major power struggle at its United Methodist General Conference in the Spring of 2012.

Leaders from the Methodist Federation for Social Action responded to the official “Call to Action” plan because of its radical restructuring of the church. The Call to Action proposal would distil nine of the thirteen church-wide agencies into one, replacing more than 500 volunteer board members with a single board comprised of fifteen people to oversee the agencies of a twelve-million member denomination on five continents.

In response to this extreme proposal, the Methodist Federation for Social Action is holding a telephone press conference to launch an alternative restructure approach. MFSA’s plan reduces the number of agencies from thirteen to nine and establishes four program ‘Centers’ each with a thirty-three member board.

“Officials responsible for proposing a fifteen member oversight body simply failed to come up with a reasonable proposal,” said Rev. Steve Clunn, MFSA Coalition Coordinator.   The MFSA plan with four ministry ‘Centers,’ each with its own independent board of 33 people, would have a manageable amount of ministry and fiduciary responsibility. The MFSA plan is a far better and more reasonable approach to reducing the size of our current structure.”

“One of the most disappointing aspects of the Call to Action proposal is the lack of attention given to our brothers and sisters in Africa, Europe, and The Philippines,” said Tracy Merrick, a member of the First United Methodist Church of Pittsburgh. “The United Methodist Church is a world-wide church. General Conference meets once every four years to make policy for the whole church, not just for the United States. Although over 36% of the members of the UMC live outside the United States, with the Call to Action proposal the central conferences would only be allocated 11% of the seats on the proposed General Council for Strategy and Oversight. The formula for the remaining seats includes a bias that favors the Southeastern Jurisdiction of the US. Even though the Southeastern Jurisdiction has 24 % of the members of the UMC, it would be allocated more seats than all of the central conferences combined. This approach isn’t consistent with our democratic heritage, it isn’t inclusive of the entire denomination, and it isn’t   helpful in growing our church.”

“Essential monitoring roles around issues of race, ethnicity and gender would be drastically diminished under ‘Call to Action,’ proposal” said Jill Warren, Executive Director of MFSA.  “The two agencies tasked with monitoring the church around discrimination would lose their independence within a super-sized agency that would try to monitor itself. The proposed board of 15 people would virtually eliminate our representative leadership. It painfully reveals that the church needs an independent voice that speaks to issues of race, ethnicity and gender—perhaps now, more than ever.”

Don Hayashi, President of the National Federation of Asian American United Methodists (NFAAUM ) said, “The MFSA plan respects the diverse nature of our global church, the leadership of women who comprise the vast majority of people sitting in the pews, and people of different ethnicities and colors whose representation has been a treasured and valuable part of this denomination.”

MFSA will hold webinars and make presentations across the country leading up to the April 24-May 4 General Conference, where both proposals will be under consideration.

For more information about the MFSA plan “A New United Methodist Administrative Order” plus how it compares to the current structure and the “Call to Action” proposal, please visit the website: www.mfsagc12.org.

MFSA: Over 100 years of progressive United Methodists
connecting with one another and turning their faith into action