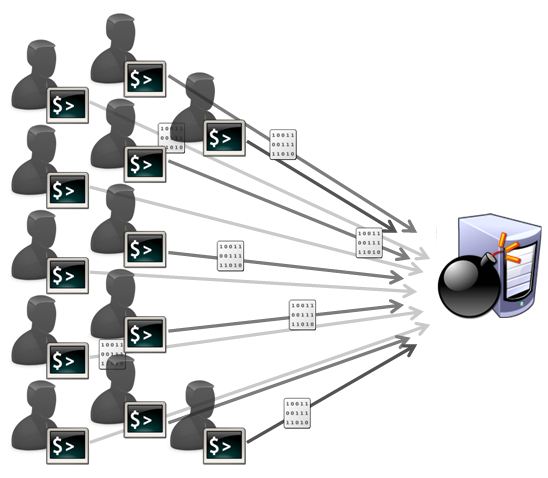 → The Nerd Gospel is a category of posts that use technology and nerd topics to address theological issues. FYI for our new readers!

When hackers get mad with corporations, they get even and attempt to knock their websites offline.

One of their tactics is a DDoS attack: Distributed Denial of Service attack. They hack into and take over computers of unsuspecting people and cause them to all try to load a target website at the same time. Like a million people hitting “refresh” at the same time, the traffic overwhelms most websites and they go offline, causing embarrassment and disruption of business to those corporations.

Last year, hackers tried to take down Amazon.com. They failed. Why? Amazon basically suffers a month-long DDoS attack during the heavy Christmas season so they’ve done lots of work on their systems making them handle all the traffic. From the article:

Amazon has spent years creating and refining an “elastic” infrastructure, called EC2, designed to automatically scale to handle giant traffic spikes. The company has so much spare server capacity, in fact, that it runs a sideline business hosting other websites.

Indeed they do host lots of websites: Amazon hosts all the images and large files of this website. So I never have to worry because I trust in the network’s ability to avoid being overwhelmed.

Theology (thinking about God) is what helps us engage the world around us in all its immense complexity and still be able to believe in God despite a world that seeks on every level to overwhelm us.

Bruce Epperly has this great description of theology in the beginning pages of Process Theology: A Guide for the Perplexed:

An accessible and insightful theology responds to the perplexities of life that threaten to overwhelm us intellectually, emotionally, relationally, and spiritually as we face…the unfixable events of life. (Page 3)

We are overwhelmed in our world, aren’t we?

The worst part is that often websites that are targets of DDoS attacks don’t fail on their own…their owners take them offline, removing them from the situation. We do the same thing. We check out, we disengage, we avoid conversations and move deeper and deeper into our echo chambers.

Good network administrators redirect traffic when it gets overwhelming, they don’t abandon the site. They spread out the traffic among more host computers, they start identifying the toxic computers and disable their access, they sometimes bring up the backup site and direct good traffic there and bad traffic to honeypots. They allow their system to adapt, not break.

So it is with us. We can allow our systems to change, to respond. We keep solid with the foundations and the essentials, but perhaps find new (for us) ways of ordering them. We create an elastic theological framework like Amazon’s that distributes dissonance, trauma, pain and world tragedy over many theological positions rather than overwhelming one.

This is what we’re doing at HackingChristianity. We’re putting our theological systems up for review, finding new ways to adapt to our theological problems, and guiding people in opening up our systems when they are obviously unable to respond to the complexities of the world. When people’s systems crash, we help pick up the pieces and seek out a better way of putting it all back together.