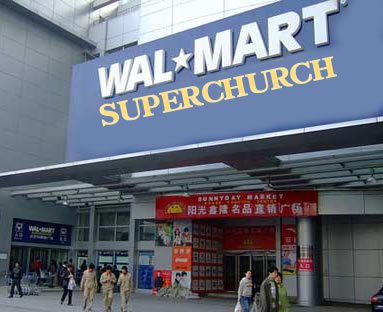 Recently, Hacking Christianity’s favorite Mark Driscoll instructed the media to no longer refer to his church’s multiple campuses as…oops…campuses. Instead, they are to be called churches. Here’s one of their pastors Jamie Munson explaining:

But here’s the question: is a local congregation its own church if its sermon is outsourced to an outside entity?

Like most Wal-Mart or Franchise Churches (discussed on this blog previously), video broadcast allows the local parishes to have local pastors or “lead pastors” with local laity…but the Sunday message is most-often given over to the mothership church.  This phenomenon is not limited to churches that expand their roots, it also encompasses churches that absorb other churches or take over the message at other churches.

Andrew Conard recently posted on his blog that Church of the Resurrection, the largest UMC church in America, was looking for a few good men, er, a few student or lay pastors who would be willing to hand over their sermon time to Resurrection. He writes:

I am on a strategic project team at Resurrection that is looking for three small churches, currently led by lay speakers, local pastors, or student local pastors, who would be interested in testing a new model for ministry – these churches would, for one year, become a part of a multi-point circuit with Resurrection. The aim is to see what we might do together to strengthen small churches. Resurrection would provide 36 weeks of sermons via video, coaching, and other resources.

There are over 15,000 United Methodist Churches with less than 50 people in worship each week. Many are vital and vibrant faith churches; others are struggling. We’ve wondered what might happen if large churches partner with smaller churches in a model that looks something like what happens with our campuses, though, under this new model, each smaller church remains its own congregation. We would provide coaching, marketing resources; training and Resurrection’s sermons would be used in these churches via video 75% of the time. We’re testing this with three churches in the next year. If it is successful, we’ll offer this model to other large and small churches to look at creating similar partnerships called “circuits.”

My comment (unresponded to as of this writing) is thus:

Having said all that, I don’t expect Rev. Conard to respond, given that he’s leaving his oversight of this project to go to Resurrection West this week (congrats by the way!), but these are still relevant questions, particularly why they are focusing on churches without full clergy at them. Odd.

Regardless, the rising phenomenon now is to outsource the message of a local church to outsiders so that clergy can focus on other aspects of ministry. We’ve talked about this before in a previous blog conversation, which included an intern and a staff person at CoR, so read more there.

But the question still remains: if the Gospel of Jesus Christ is preached from afar, not informed by the receiver, is that congregation an individual church or is it an extension of a mother church? If the sermons come from the top-down and community comes from the bottom-up, are they their own churches or the same church in different contexts?