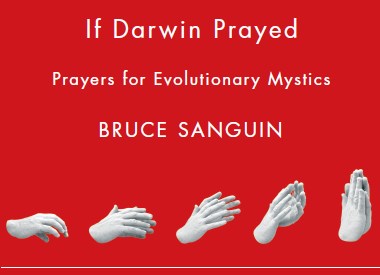 Disclaimer: I received this book free via Mike Morrell and the viralbloggers network. I’m happy to review materials with the only stipulation that I am able to write my own opinions. So I can be bought…but what you buy may not be what you expected! Ha!

Darwin and the Church was a topic recently on UMNS. A retired scientist talked about faith and science and how to bridge the gulf between them.  Kuelling ends with this affirmation: “We need to recognize that, as stated in The Book of Discipline, “We find that as science expands human understanding of the natural world, our understanding of the mysteries of God’s creation and word are enhanced.” (Paragraph 160.F)”

I admit to being pleasantly surprised by If Darwin Prayed by Bruce Sanguin. While reading the Prologue I assumed this would be a mere theological treatise that would yield few surprises for this clergyperson who doesn’t have a problem with evolution properly understood. Sanguin talks about this challenge in his prologue:

To acknowledge that the human being emerged out of the adaptive resilience and struggle of all of the creatures that came before us is to assume a more humble place in the scheme of life. Gratitude replaces arrogance as we realize that our challenge is not to have dominion over creation but rather to assume our proper place in our one Earth community. An evolutionary worldview implies an underlying shift in identity that can be perceived as a threat to those who cling to biblical literalism.

But more to the liturgical aspect, most of the book are prayers. Prayers for the liturgical season or lectionary passage. For example, I have permission to post one of the prayers for your enjoyment (this one focuses on Doubting Thomas, Easter Season):

O Risen One,
help us to tease out this sacred tangle:
you, in the Father;
us, in you;
all entwined by Spirit?
A holy braid, not weakened by us?

In fact, you say, a lifeline for the lost,
with the power to forgive sin,
to forge new futures not tethered to the worst
that has happened to us
but rather to the best that you have in store for us?

Forgive us if we, like Thomas,
hold out for just a bit
to touch the holes in your hands and your side,
and to take a peek where life’s thorns have punctured our hope.

But there you are,
enfleshed in today’s tortured,
in the left-behinds and the lonely,
and in our own refusal to give in to despair.

You rise up, again and again,
in the doubters and the holdouts,
who, more deeply than most,
want to believe in the power of resurrection.
Amen.

Sanguin intends them for personal devotions, prayers at the beginning of worship and as an act of worship. He gives a one-two page thought between each section to relate the liturgical season with evolutionary science.

I was struck when I read through them how almost invisible the science was, but it emerged in creative ways. In the prayer above, the moniker of holdouts instead of doubters was a helpful change to reflect the evolution of their unbelief rather than a static stage of unbelief.

In fact, the only quibble I have (and it is not with the book) is that I’m not terribly mystical in my prayer life, so I felt a bit out of touch of the deeper words and poetry of the phrases. For others who are more in touch (and I envy you), it might work for you.

Check out If Darwin Prayed by Bruce Sanguin and thanks again to Mike Morrell for the opportunity to review books that I otherwise would pass over.