Home/Theology/Justice/“Here, There Be Dragons” for Young Clergy 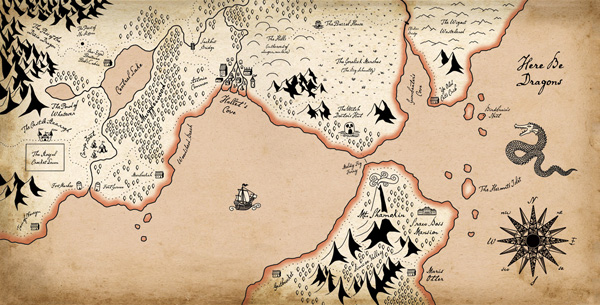 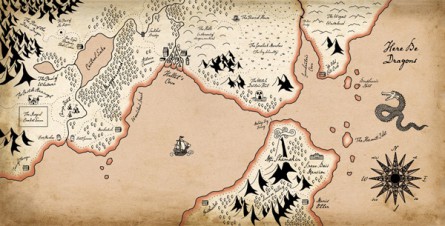 On old-timey maps (the ones where the world was flat and you would fall off the edges), they would write hic sunt dracones in the unknown regions, literally “here be dragons.” This term denote dangerous or unexplored territories…places where the wise need not dwell. Places where you should avoid if you don’t want to get hurt.

This phrase came to mind last night when a new twitter friend had the following update on her page:

Talked at lunch with seminary peeps about how we R called 2 speak against injustice but were afraid 2 due 2 hurting our ordination process.

For adventurers, they were called to venture out and either avoided the pitfalls or engaged them head-on, well equipped for the perils or dragons ahead. For young clergy, they are following their calling as well…but the sentiment is that they are still being watched over, evaluated, and potentially tossed for following their passions and convictions. “Here, there be dragons” indicate areas of our pastoral maps where we know we will get into trouble if we engage controversial topics and the temptation to simply avoid them seems insurmountable but simultaneously unfaithful to our calling.

I am young clergy: 31 years old and fully ordained in the United Methodist Church. I don’t have any words of significant wisdom for my fellow young clergy who are only a few years in age (but years of significant steps) behind me. But here’s a few suggestions that might better equip young clergy for when they decide to engage the dragons, using examples from my own life.

Two disclaimers. One, these aren’t prescriptive but subjective comments that may or may not be relevant to your context. Two, while I’ve been accused of being unfairly critical of the BOM process, I’m not writing this to dissuade candidates from ministry but to equip candidates out of my own mixed experience. Okay? Okay.

Remember that “here, there be dragons.” You must be equipped and prayerful in how you advocate for justice issues. Wading into controversial topics as a young clergyperson can have devastating results, as Chad Holtz will tell you. And even if you are wiser than I, the power is not on your side when it comes to your ordination process. However, being clear about your calling, connecting it with your congregation, and informing it with UMC doctrine and tradition will be appreciated by the faithful people who evaluate your process. And in the sad cases when there is unreasonable animosity or prejudice or hypocrisy on the other side of the table, they will have to stick their own necks out and risk being called on it. And that may lead to change in the BOM itself. Rock on.

Thoughts from candidates or clergy in the process, or clergy already through the process who have more life experience and can offer thoughts?