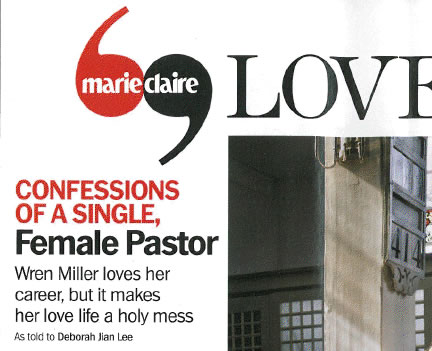 I hate to bring more fuss to a semi-manufactured controversy, but our blog post “Single, Female Pastor? It’s Complicated” bears revisiting and highlighting of female pastors’ perspectives on this topic.

Why? First, you can finally read Marie Claire’s article online and thus can examine the full context of the conversation (previously all we had were illegal scans for 24 hours…and then blog posts about the topic).

Second, this blog was linked to by David Gibson in AOL’s Politics Daily and Bromleigh McCleneghan in the Christian Century…thus we’ve gotten a lot of traffic and new readers!  However, the CC gives a negative spin to our blog post, indicating that we said that “prayers for the young lady are in order.” Yes, I said that, but I called for prayers that she embraces this pastoral opportunity to reach out to people like her, not that she gets her spirit checked or repented. Perhaps it’s my lingering resentment at being rejected from CC (they want “more serious essay types”), but I felt that a closer read of our actual words by McCleneghan would have been nice…

But on to the perspectives: We’ve reached 39 responses on the blog post, which places it in the top 10 most-commented articles on HX of all time. Wow. While a decent amount of it is back-and-forth between this blog’s readership and another pastor blogger, there’s a ton of  comments by female clergypersons whose perspective I cannot match but can highlight a sampling:

Read the rest of the comments here.

Two comments by me:

Welcome to our new readers and your comments are appreciated.