Home/Group Theory/Politics/10 Commandments? Why Not The Beatitudes? 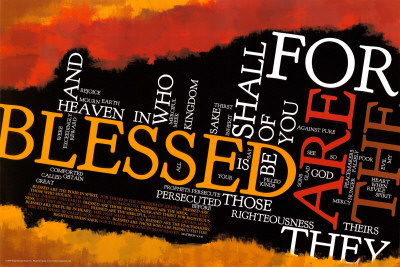 This question was posed to the congregation this past Sunday: Why do we, as Christians, support putting the Ten Commandments everywhere? Why do we fight tooth and nail to support their placement on public property? Why do we do that when Jesus has given us a set of promises that form a more perfect society?

In Matthew 5:1-12 (which was the Lectionary yesterday), Jesus gives us the Beatitudes: the “Blessed are…” lines that form the first part of his Sermon on the Mount in Matthew’s gospel. While the parallel passage in Luke contains the “Cursed are…” lines, Matthew’s is all about blessing.

The group at church was wondering why we don’t put the Beatitudes everywhere?

Why do we put up the Ten Commandments, 6 of which are part of our civil law and aren’t going anywhere? Why not the Beatitudes, none of which are incorporated into society and all of which are hopeful promises to those who seek to model Christ on earth? For sure, some people want us to equate our society with Christian principles, hence why they are put up at courthouses and places of public policy.  This is despite the fact that the 10 Commandments were not the basis of American law at all.

But beyond misplaced belief, I think the reason lies in the difference between a grace-based theology and a judgment-based theology, the latter of which is closer to the Empire than the Kingdom. 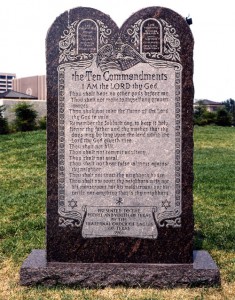 For civil society to function, we must have laws with retributive justice. They are the “or else” part of following the rules. There will always be people who do not function within these laws and they are punished.  To accompany this, there are many theologies that preach a God who sounds like civil society: don’t do this or you’ll burn in hell. Do turn your life to Jesus or you will go to hell. The proscriptive laws and retributive response of judgment fit nicely with the biblical stories and find much place to take root in both society and theology, Empire and Kingdom.

But for me, I find much more meaning in a grace-based theology as I see it as closer to God’s kingdom than the earthly empire.  Is there judgment in Jesus’ words. Absolutely. Is there judgment in John Wesley’s theology? Absolutely…far more than I’m honestly comfortable with! But it’s not the basis of the theology: the basis is God’s grace given to us without merit before we are born, when we turn our life’s trajectory to God, and as part of our continued seeking to walk with God fully and completely. God’s grace abounds!

In reading the beatitudes, the first section of the Sermon on the Mount that goes on for 3 chapters, I sit and think about “what would happen to society if we modeled these values?” We have already seen society advance to the point where six of the Ten Commandments are part of our law. We’ve won! Why not now seek a society where the peacemakers are lifted up, the merciful are contagious, the meek are admired, the persecuted are supported? Why not offer grace to these exemplars of Christian ideals? A heavenly society where the empire is reversed, stood on its head, and the marginalized are exalted and the powerful are brought down from their thrones?

What could our society look like if we started exemplifying the Beatitudes rather than the Commandments, if we held up grace-based theology rather than judgement-based theology? Are they both legitimate? Of course. But for me, I find much more meaning in exemplifying ideals and “standing up for the lookouts” than in advancing a theological system that supports the legs of the Empire rather than the enduring love of God’s kingdom.

Just a thought. Your thoughts?