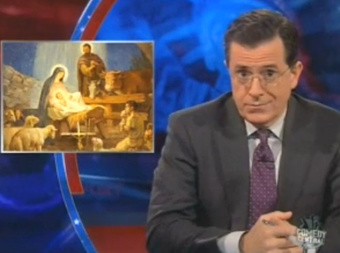 It annoys me whenever Jesus is used as a talking point in politics by people who water down or misrepresent the Bible’s take on the life and ministry of Jesus Christ. I call that Jesus hijacking, or putting Jesus in a narrow political column that happens to be your own. So when I saw Stephen Colbert’s “Jesus is a Liberal Democrat” video posted on facebook, I passed it by out of that same annoyance.

But when the video popped up 30 times on facebook amongst my friends, I can come to one of three conclusions.

Well, regardless, for the 13 of you who haven’t seen the video, here it is. He is primarily responding to Bill O’Reilly’s assertion that:

Being a Christian, I know that while Jesus promoted charity at the highest level, he was not self-destructive.

Uh…and where exactly did Jesus end his earthly ministry but on a cross? That’s not self-destructive? Really?

If you can suspend offense at the conservative bashing and skip over Colbert’s comments on Ben Franklin’s indiscretions at 1:55, it’s got some great points to ponder. Check it out:

When I watched it, I expected typical liberal boilerplate but in the act of claiming Jesus is of one political party, Colbert satirizes the attempts by all sides to misrepresent Christ’s calls to serve the poor. Would Jesus be a Liberal Democrat? Of course not, that’s just polarizing comments to sell entertainment. By hijacking Jesus to be of one party, he exposes how ridiculous such a thing is and calls us to move beyond partisan politics to actually serve the poor.

But if this is going to be a Christian Nation that doesn’t help the poor, either we’ve got to pretend that Jesus was just as selfish as we are, or we’ve got to acknowledge that he commanded us to love the poor and serve the needy without condition…and then admit that we just don’t want to do it.

Ouch. A reminder to us all to not water down Jesus’ calls to serve others in our own contexts, regardless of our politics.