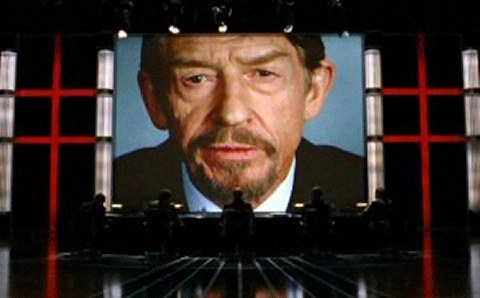 In V for Vendetta, V outlines why the people elected to High Chancellor such a terrible person who robbed the future people of their personal liberties:

There were a myriad of problems which conspired to corrupt your reason and rob you of your common sense. Fear got the best of you, and in your panic you turned to the now high chancellor, Adam Sutler. He promised you order, he promised you peace, and all he demanded in return was your silent, obedient consent.

But long before V, there was a simple phrase that encapsulated the same thing in fewer words:

This is a Latin phrase from Cicero meaning loosely “In times of war, the law falls silent.” While it was originally used by Cicero to justify what seemed like murder during a time of war, it has since grown to be an argument against suspending laws during times of war. The past 10 years have challenged this concept in various ways as America struggles to deal with balancing personal liberty with fighting terrorism. Oh, and it’s also a Star Trek Deep Space Nine episode.

Using that as a starting point, I’ve been able to put a finger on a concern in the United Methodist Call To Action report: it seeks to diminish church polity.

From page 18, in the context of raising up strong leadership, the report indicates that figuring out better ways of living together is secondary to putting better people in the pulpits and pews.

Courageous, collaborative leaders are much more important than layers of intricate legislation or revamped organizational structures.

From page 21, in the context of relating to varied missional contexts, the report indicates that breaking polity to reach new places may be of value.

Vitality will take multiple forms in light of varying circumstances. Since rulebound structures inhibit innovation, continuous renewal, and viability, a key responsibility of leaders is to suspend rules in order to test and assess the efficacy of new, worthy ideas.

In both of these cases, it seems that polity, or the connective glue of the United Methodist Church, is of secondary importance to both (a) results and (b) better clergy and lay leadership.

In my understanding of Methodist history, John Wesley was unable to directly manage the entire movement. So he created connective entities of class leaders, circuit riders, lay preachers, and others to report to him what was going on. These connective groups were the glue between the head (Wesley) and the hands/feet (local churches). When Wesley died, the executive of the church was not replaced…bishops would vaguely become the role Wesley held. At that point, the highest form of the church was the connective tissue: the collaborative groups and local leaders figuring out how to live together.

This doesn’t mean that the General Boards and Agencies we have today are the highest form of the church…rather the polity, the shared practices and beliefs, is very important and not just redundant church malaise. They are not sacrosanct, as Bishop Weaver writes in the introduction to the 2008 Discipline, but are malleable forms of communication and relationships that we revisit every four years to ensure they are facilitating ministry rather than inhibiting it.

Why is this relevant? In times of war, the law falls silent. In times of stress and fear, the law falls silent. The words of “immediacy” and “crisis” permeate the Call to Action report and clearly insinuate that in our time of crisis, we ought to disregard our polity and turn over the keys to some church executives and fruit-filled pastors to guide us out of this mess. That’s a good idea for sure. But I’m not sure it is a Methodist idea.

Previous posts on the Call to Action Report: