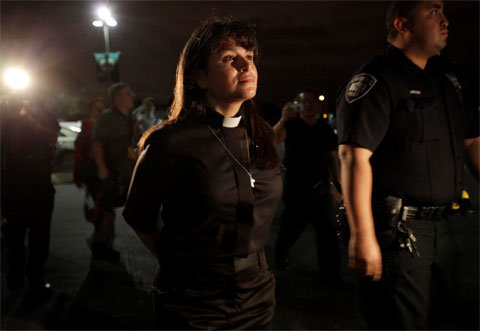 Two experiences today that illustrate the range of calls to build the kingdom of God through activism.

I was wondering why my friends were changing their facebook profiles and today I tried to read why. One of the facebook trends this past week was to replace your profile picture with a cartoon character from your childhood. I didn’t participate. It wasn’t like doppleganger week where you posted the celebrity most like you (which was just fun) it actually had a point:

Change your facebook profile picture to a cartoon from your childhood. The goal? To not see a human face on fb till Monday dec. 6.b Join the fight against child abuse copy & paste to your status and invite your friends to do the same.

Like posting your bra color to promote breast cancer awareness, it wasn’t just humor but was a form of slactivism: a passive action to promote a cause. It is light and can bring in more people to the conversation, but for the most part slacktivism really doesn’t make meaningful change. As the Snopes article on this trend (which wasn’t began by the organization it says it supports anyways!) concludes:

Whether the “cartoon characters” meme began as a group participation lark (akin to seeing how many college students can be stuffed into a Volkswagen), as a way of waxing nostalgic about one’s younger days, or as a genuine effort to raise awareness about children’s issues, those truly interested in striking a blow against child abuse need do far more than just swap their profile picture for one of Scooby Doo. Real problems don’t disappear as a consequence of acts of slacktivism; they’re fought through the mechanism of donation of time and/or money. The character one needs display to the world is not that of a cartoon, but of a benefactor.

My second experience was reading the story of UM clergyperson Rev. Lorenza Andrade Smith who was arrested during a sit-in protest of a US congresswoman who changed her stance on seeking more legal protection for children of undocumented workers: children who obviously had no say in entering the USA illegally. That’s her picture above.

But the pastor’s activism isn’t just a one-day affair:

Along with two of the student strikers, Rev. Andrade Smith is on a complete fast–refusing water, as well as food. Supporters of the Methodist pastor and the students conduct daily vigils in front of the detention center.

“We’re completely exhausted,” said Felipe Vargas, a PhD student in History, Philosophy and Education Policy at Indiana University, who was born and raised in San Antonio, “but our spirit is stronger than ever. When we launched this hunger strike, we had no idea we would receive such wide support.”

So while the rest of facebookdom was changing their profile pictures, one of my UM clergy sisters was fasting in jail while standing in solidarity with her parish and her community.

I have zero problems supporting clergy who break victimless laws while advocating for victims of injustice. I have clergy friends who have been arrested for protesting Columbus Day and breaking the bar at General Conference as forms of activism. Obviously if you hurt someone while advocating for someone, then you are creating more victims so there’s a line in activism. But to draw attention to an issue through personal harm and professional damage is a form of activism few actually embrace, including me.

So here’s another blog post that is, honestly, slactivism: writing about an activist without actually participating in seeking change. But read more about the Rev. Smith and her support of the DREAM act on UMC.org and Huffington Post and hopefully not offer judgment from our armchairs but instead offer prayers for Smith, her community, and a resolution to this entire situation.