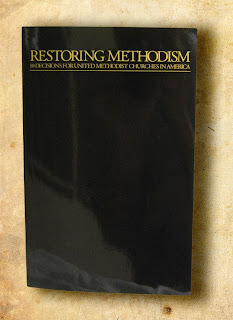 Oklahoma clergy have been assigned to read “Restoring Methodism

” by Drs. Molly & James Scott in preparation for a retreat with them in late September. Given that I was previously from a different area of the country, I happen to have attended the Scotts’ seminar before and am familiar with their arguments and recommendations.

In re-reading the book during some idle moments today, I noted one argument that I’m unsure is valid.

On page 31, the Scotts write about why it is important to restore Methodism to its roots and originating practices:

Restoration is the answer because it is unthinkable that God would abandon the institutionalized churches in America, as they compromise the vast majority – up to 90% – of the Christians in this country.

I am unsure this as “unthinkable.” God has done this before.  God had abandoned the Chosen People to decades of attrition (the 40 years post-Exodus), disowned the stubborn nations (Jeremiah 3:8), and allowed its assimilation into other cultures (Pharisaic Judaism v. Roman Hellenism).  God also allowed the destruction of the Temple and the Jews found much meaning and refocus in the Diaspora that they wouldn’t likely have found otherwise.

God has done this before, taken away what we thought was “too big to fail.”  Can we really dismiss the horrifying thought that the Church as an institution has a time limit as well?

Perhaps the Scotts meant that numerical decline is not in God’s plan for the Church. That’s a valid interpretation, I think.  But Jesus had multitudes following him, was an icon for church growth…but after his hard sermons, he was left with 12. Failure, right?

Further, the Scotts counter their own argument themselves on page 53:

It was not unusual for Mr. Wesley to examine a Society with 800 members and leave them with 400 members.

So it is OK for the institutional church to shrink but not be destroyed? But isn’t restoring Methodism about reversing the shrinking trend? Huh.

To be clear, I’m not advocating a burn-it-down-and-start-over reform…this blog would be called “Reformatting Christianity” if I did. I’m as committed to righting the institutional church as the next pastor.

But I do have to assume that it could be God’s plan that the church burn to the ground and be risen from the ashes in a fiery Phoenix. And I have to wonder how best I could be an instrument of grace in the interim.

God is sovereign. Let’s not place anything (even the unthinkable) beyond God’s possibilities, and seek instead to be instruments of God’s grace no matter what may come next.