One of the first difficult discussions I had with the Board of Ordained Ministry was over invitations to Christian Discipleship (ie. “altar calls“). It is customary in the sermons we submit to include an invitation to accept Christ into your life via an altar call.  I did not include one and they asked me why. Instead, I invited the recipients of the sermon to action, be it offering hospitality or seeking justice or truth-telling.  It was my understanding that Christ invites us continually, not just once, and we respond continually as we seek sanctifying grace. Thus began a 4-year conversation with the Board over my weak embrace of an altar call praxis.

While as a pastor I have of course led people to Christ, as a layperson I can recall only one: a youth at a summer camp. It was a camp that was heavy on emotional 2-hour worship with a rockin’ band and sweating preachers.  This youth and I had a good relationship, and on the last night of camp when other youth were coming to the altar, without my prodding he accepted an altar call, asked me to walk with him, and credited me with inspiring him to discipleship.

I have thought of that youth for a decade now, and while I praise God that he chose the path he did, I wonder about the reasons why.

Was it the band?
Was it the preacher?
Was it seeing others walk down the aisle?
Was it feeling like an outsider all week and wanting to be included?
Or was it the Spirit and I should stop analyzing it?

I’m certain it was a combination of the above, with the Spirit affecting the large majority of it. But I cannot help but wonder to what extent did the psychological role of emotive worship and the social-psychological effect of altar calls affect the situation? Are those means justified by the ends of saving people to Christ?

The seersucker seminarian pointed me to a post by Oklahoma pastor Wade Burleson. He recounts an article  that speaks well of my reservations with altar calls and my lingering concern that “the ends justify the means” mentality is intrinsic and inseparable from altar calls.

The article by 1970s preacher Dr Martyn Lloyd-Jones is reprinted here in its entirety (source here, bolded sections are my bolds).
=========== 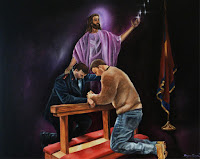 Question: During recent years, especially in England, among evangelicals of the Reformed faith, there has been a rising criticism of the invitation system as used by Billy Graham and others. Does Scripture justify the use of such public invitations or not?

Answer: Well, it is difficult to answer this in a brief compass without being misunderstood. Let me answer it like this:

The history of this invitation system is one with which you people ought to be more familiar than anyone else, because it began in America. It began in the 1820s; the real originator of it was Charles G. Finney. It led to a great controversy. Asahel Nettleton, a great Calvinist and successful evangelist, never issued an “altar call” nor asked people to come to the “anxious seat.” These new methods in the 182Os and were condemned for many reasons by all who took the Reformed position.

One reason is that there is no evidence that this was done in New Testament times, because then they trusted to the power of the Spirit. Peter preaching on the Day of Pentecost under the power of the Spirit, for instance, had no need to call people forward in decision because, as you remember, the people were so moved and affected by the power of the Word and Spirit that they actually interrupted the preacher, crying out, “Men and brethren, what shall we do?” That has been the traditional Reformed attitude towards this particular matter.

The moment you begin to introduce this other element, you are bringing a psychological element. The invitation should be in the message. We believe the Spirit applies the message, so we trust in the power of the Spirit. I personally agree with what has been said in the question.

I have never called people forward at the end for this reason; there is a grave danger of people coming forward before they are ready to come forward. We do believe in the work of the Spirit, that He convicts and converts, and He will do His work. There is a danger in bringing people to a “birth,” as it were, before they are ready for it.The Puritans in particular were afraid of what they would call “a temporary faith” or “a false profession.”

There was a great Puritan, Thomas Shepard, who published a famous series of sermons on The Ten Virgins. The great point of that book was to deal with this problem of a false profession. The foolish virgins thought they were all right. This is a very great danger. I can sum it up by putting it like this: I feel that this pressure which is put upon people to come forward in decision ultimately is due to a lack of faith in the work and operation of the Holy Spirit. We are to preach the Word, and if we do it properly, there will be a call to a decision that comes in the message, and then we leave it to the Spirit to act upon people. And of course He does.

Some may come immediately at the close of the service to see the minister. I think there should always be an indication that the minister will be glad to see anybody who wants to put questions to him or wants further help. But that is a very different thing from putting pressure upon people to come forward. I feel it is wrong to put pressure directly on the will. The order in Scripture seems to be this – the truth is presented to the mind, which moves the heart, and that in turn moves the will.