In Fayetteville, Arkansas, there’s an interesting twist to this phenomenon…well, a picture is worth a thousand words: 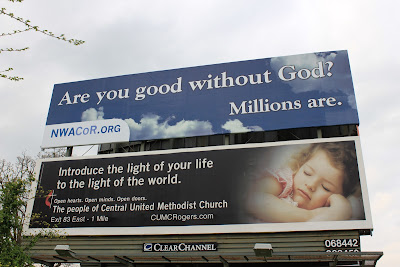 Yep, the NWA Coalition of Reason has their billboard on the same one as a United Methodist Church.  And apparently it wasn’t planned out that way.

So how did the two groups respond?

“That was a complete coincidence. We didn’t know that until we went and took a picture of the sign and said. Oh, we had no idea,” said [co-founder of Fayetteville Free Thinkers Darrel] Henschell.

And neither Henschell, nor the church’s pastor thinks it’s a bad thing.

“That could be a metaphor for how secular people and church minded people can co-exist peacefully in our society,” Henschell said.

“The first reaction is it breaks my heart,” said CUMC Senior Pastor Carness Vaughan. “But on second thought, any opportunity to get people thinking about God is a good thing.”

Over and over at HX we talk about the Echo-Chamber: how to introduce dissonance into a person’s customized lifestyle.  I think we have an example right here of an unintentionally effective means to do that.  Are people’s faith going to be shattered by seeing a billboard? Not likely. But will a conversation start about faith? Much more likely.  It becomes an easy conversation starter in workplaces and schools and homes about faith, and I hope people take advantage of the opportunity.  I applaud the hospitable reaction of the UMC and the CoR to see this as a conversation starter and not dueling billboards.