Stephen Colbert is a fake ideologue host, but he is also a sunday school teacher (in real life!)…and on occasion, it shows!  On tonight’s show (3/18/2010), he talked about Glenn Beck’s social justice miseducation, and interviewed a Catholic priest, holding his own on theological and biblical notions. Comedy and solid theology gold!

But while interviewing Mary Matalin, Matalin said that Jesus said something like “if you give a man a fish, you feed him for a day.” She also said Jesus said “if you are lazy, you don’t eat.” I apologize that I don’t have the exact quote word-for-word.  But Colbert countered that Jesus didn’t say either of those.  The interview meandered on and the show was over.

For even when we were with you, we gave you this command: Anyone unwilling to work should not eat. For we hear that some of you are living in idleness, mere busybodies, not doing any work. Now such persons we command and exhort in the Lord Jesus Christ to do their work quietly and to earn their own living. Brothers and sisters, do not be weary in doing what is right.

So it would seem to indicate that Matalin was correct…such admonitions against laziness are in the Bible.  But Jesus did not say it, and even 2 Thessalonians is not likely to have been written by Paul, instead representing what John Dominic Crossan calls “the Conservative Paul” who makes other statements contradictory to the other letters of Paul, especially on social issues like poverty and women (more here). Authorship is important in biblical study, people!

So, in short, +2 to Colbert for knowing what Jesus said…but -1 for the show’s editors muddying the issue by linking Jesus with 2 Thessalonians.

I will link the video clip tomorrow when it comes online.

::EDIT:: Here’s a link to the episode (watch the whole thing!) and here’s a screengrab of what we’re talking about: 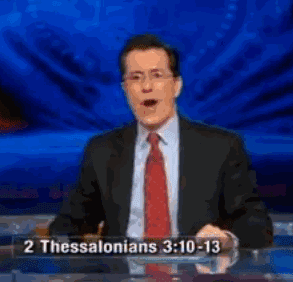