Home/Group Theory/Echo Chamber/When the Church is the Borg: Assimilate + Dominate 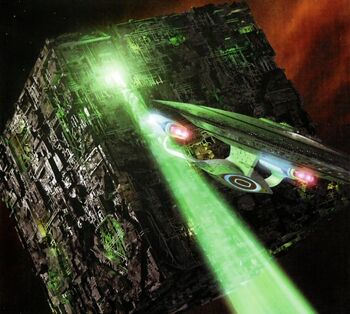 I’m really not interested in partisan political discussion, but blogger Andrew Sullivan has an observation that I want to post here for discussion on its parallels in the church.  He writes about former Republican VP candidate Sarah Palin joining Fox News:

In my view, we’re seeing the fusion of a political party with a media company. It’s like a state-run TV that only runs pro-GOP stories. Think of the TV in Iran and you’ll get the fuller picture.

And by sealing off Fox viewers from any other news source, and feeding propaganda 24 hours a day, and having a monopoly of the base, FNC is more powerful than the RNC in determining Republican politics.

It strikes me that I’ve seen this approach in churches as well.

I think this is a natural tendency to exclude, assimilate, and dominate a particular area of influence…it is certainly the most effective!  But in doing so we are not critiquing the most dangerous aspect: the echo-chamber that reduces Christian compassion and stunts Christian expression!  Indeed the churches that most often use these tactics are ones that spawn replicas of themselves rather than partner with local expressions of their faith, which further extends the echo-chamber to new areas.

I admit that I don’t invite in Beth Moore bible studies or Pat Robertson content into my parish.  But I do engage their sentiments and theologies in sermons and interactive bible studies.  I get uneasy when the choir sings songs that promote pre-dispensationalism or when the lector prays to “Father God” but I don’t dictate that such things are anathema or seek to insulate people from those ideologies.

Engagement with dissonance is preferable to insulation.  The worst thing you can do for a growing child is put them in a medically-pure bubble where they do not build up immunity to disease.  I fear such chambers that we create in our churches are free of dissonance and full of self-fulfilling statements that are harmful to Christian witness and personal growth.  If you build your whole life around freedom from dissonance or challenge, then how can Christ (who challenges and offers dissonance) be made real?

This is a problem, from my perspective.  I just don’t know what to do about it.  Thoughts?